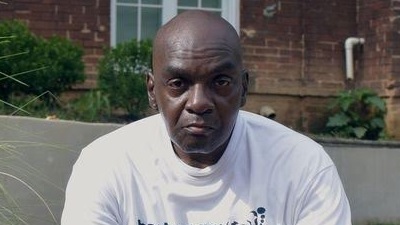 Some nights he’d ride a D.C. Metrobus to rest and keep warm, cleaning up in a McDonald’s restroom the next morning. Homeless in D.C., Ronald E. Armstrong had gone down the wrong path and found himself addicted to drugs and without a place to stay, first living with acquaintances and later at a homeless shelter.

“I’m one of the ones who thought becoming homeless could never happen to me, but that’s the part of life you never plan for but you deal with it accordingly when it does happen,” he said.

Eventually getting into a detox program, Armstrong credits his comeback to Back on My Feet, which combats homelessness by setting up running and fitness programs and linking participants to employment and housing resources.

Back on My Feet introduced Armstrong to Capital Area Asset Builders (CAAB), which provided financial coaching and a grant that helped him set up a trash collection business in D.C. Although the trash business didn’t survive the pandemic, Armstrong rebounded once again and is now working as a peer specialist with the HIPS harm reduction and needle exchange program in D.C.

Earlier this year, Armstrong received an email announcement about a path to homeownership program CAAB had launched with the Greater Capital Area Association of REALTORS® (GCAAR).

“Homeownership has historically been the best way to build wealth, which is why GCAAR and CAAB partnered on this series – to ensure local individuals and families have an opportunity to achieve financial stability, long-term asset-building and prosperity,” said Joseph Leitmann-Santa Cruz, CAAB’s CEO and executive director.

Armstrong, who turned 58 in July, was among the 317 who signed up for the CAAB-GCAAR webinar series and said it was a valuable and eye-opening experience. One of the most surprising aspects was the home-buying inspection process, he said. Also of value: the tips on financing and saving that many take for granted.

“They said to budget your money and to ‘pay yourself first,’ and that was the first time I had ever heard anything like that,” Armstrong said. “You’d think an adult who has been working for a while and making money would know that, but actually I didn’t.”

“I am in the market to one day own a home. This program was right on time for me,” Armstrong said.

“The information was all very helpful to me and now I’m saving money. I never did that before,” he said. “They also talked about setting reasonable goals and taking smaller steps toward owning a home.”

Armstrong and his wife, disabled due to a stroke, are hoping to find a home in the District as they look to their future. Armstrong follows all the news about the hot D.C. residential real estate market and believes homeownership is a worthwhile and attainable goal, even for someone just starting out and with challenges to overcome.

“We knew there was a need and an interest in homeownership among this community, but the overwhelming response shows just how important this is to many families,” said 2021 GCAAR President Jan Brito. “While the attendees are grateful for the series, we are equally grateful that we can offer them the knowledge and tools to make real estate a part of their future.”

“This past year has shown us, now more than ever, the value of homeownership and its role in creating stability and wealth for families and their future generations,” said GCAAR Chief Executive Officer Edward Krauze. “We are opening the door for a lot of people in the community who never thought they could own a home to become homeowners.”

The Greater Capital Area Association of REALTORS®, one of the largest local REALTOR® associations in the U.S., is the voice for REALTORS® in Washington, DC and Montgomery County, Maryland. Representing more than 10,000 real estate professionals in the greater capital area, GCAAR provides services vital to its members’ daily business needs and works with lawmakers to ensure public policy that encourages homeownership and supports the real estate industry. Visit www.GCAAR.com.

Capital Area Asset Builders (CAAB) is a non-profit organization based in Washington, DC with a mission to create opportunities for low- and moderate-income individuals in the greater DC region to build financial security, savings, and wealth for the future. Visit www.caab.org .