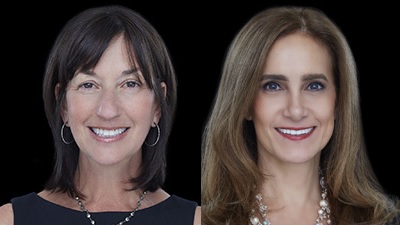 Joanne Greene and Nada Rizk have been honored among the top real estate professionals in the country by REAL Trends. The team ranked 19 in New York City and 32 among the state’s Small Teams by Volume on the 2021 REAL Trends America’s Best Real Estate Professionals list. Now in its ninth year, the coveted recognition acknowledges the most productive agents by state and metropolitan area based on closed transaction sides and closed volume.

Joanne Greene is a 25-year real estate veteran and has been recognized by The Wall Street Journal/REAL Trends as one of the “Top 100” Agents in the nation. She was previously named Brown Harris Stevens Upper East Side Broker of the Year and is consistently recognized among the firm’s top producers.

Nada Rizk, a top producing agent at Brown Harris Stevens, has successfully marketed and sold luxury homes in some of New York City’s finest cooperatives and condominiums since 2002. Nada has enjoyed particular success in the luxury condominium market, as she has expertly handled the myriad details and coordination involved and required of those clients relocating to and from New York.

Brown Harris Stevens (BHS) is one of the most prominent privately-held real estate firms in the world. Established in 1873, BHS has historically dominated the luxury, high-end market. With more than 2,500 agents across the East Coast, the company oversees the sale of marquee properties worldwide from its headquarters in New York City and its offices throughout the Tristate area, Palm Beach, and Miami.