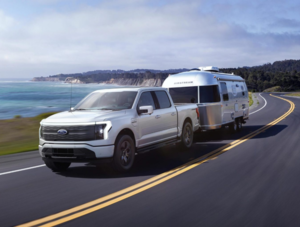 Ford Motor Company dominates the market for commercial vehicles in North America and Europe. You might think that domination will come under threat as the world transitions to electric and connected vehicles — but it turns out that Ford has a sophisticated plan to not just defend its turf with its own electric vehicles, but to actually boost the revenue generated by its commercial vehicle business. The secret? New software offerings tailored specifically for its fleet customers.

In this Motley Fool Live broadcast, recorded on May 27, Industry Focus host Nick Sciple and Motley Fool senior auto specialist John Rosevear take a closer look at Ford’s strategy to boost its revenue — and its profits — as commercial fleets transition to zero-emissions vehicles.

Nick Sciple: You mentioned Ford Pro and that strategy. Where this really starts to sing I think, is in that commercial vehicles strategy and Ford Pro, the services they can offer to some of those customers. What is Ford laying out there and what’s the thesis behind that part of the business?

John Rosevear: Their thesis, first of all, is that they are the market leader in commercial vehicles by which we mean the pick-ups, transit vans, the small vans, and so forth. In some countries, it’s the Rangers, not F-Series. They are the market leader in that kind of business in North America and in Europe, and they have a good presence in China. They are not the market leader in China, but they have a good presence, a growing presence. This is good profitable business that they want to defend from the likes, not so much of Tesla, but from companies like maybe Lordstown Motors, a start-up building a commercial pickup truck, or Workhorse Group building a commercial electric delivery van. They want to come out and say, “Hey, we’re the market leader, you should be doing business with us.” Fleets that have heavy installed, Ford vehicles they may own 15, they may own 100, they may own 500, they may own 5,000. Ford says their fleet customers tend to replace 10-15% of the fleet per year. They want to make it super easy for them to come to Ford and buy the electric, and it merges and meshes seamlessly with their existing internal combustion Fords in terms of operations, in terms of software, in terms of service, in terms of who you call when there’s a problem, all of that. They think that’s a big opportunity for them and that as they add these additional software, fleet logistics, fleet management, charging services, and so forth, is that they can make a significant gain in revenue and profit from their existing commercial fleet business while defending it from new entrants. It’s both sides of that.

Sciple: I think one of the interesting things you talked about some of these older automakers and Tesla going away from the dealership model. I think in this instance, in this commercial fleet side of the business, that’s where the dealership really can provide a significant advantage for Ford relative to some other folks out there, just because you can’t have these vehicles not being serviced very quickly and back on the market. How do you think Ford’s advantage there plugs into where they can build out this Pro business?

Rosevear: It’s absolutely huge. As the Ford people stay over and over uptime, it’s everything. If the vehicle it’s not running, it’s not earning money today, and if you’re a small or mid-sized business, one vehicle down is a big deal. Its dealers, it’s also Ford itself, it’s also what they call outfitters. When you see a Ford-based truck come from the phone company and it’s got work boxes on the back, if they come to put it in your windshield in and have a special rack to hold windshields on the back, but it’s a Ford-based chassis. That’s part of what they’re protecting, too. The new electric F-150, they can take all of the existing parts since Ford says they have the same attachment points as the existing internal combustion models, so all of that equipment will transfer over. It can be unbolted and bolted right back on the new electric vehicle. That’s important. But to the dealer relationships, that’s also super important. Getting these vehicles serviced quickly, using apps, using software to diagnose problems in the vehicle, maybe while it’s still not running its daily route and say, they’re showing a sensor problem, you can get through the route and get back to base, but we’ll need somebody to come over and look at it tonight or something, and they can set that up on the fly as they’re going. Maybe the driver reports a problem and maybe it’s just an alert that comes up in the dispatcher’s software, “Truck 32 needs a service visit quick,” and you can set that up on the fly. There may even be a way where that sort of pings the dealer or two and says, “You may get a call on this.” There is a lot of this sort of thing that Ford is already shipping and that they are going to significantly upgrade. Again, this is recurring revenue. They are not a ground breaker in this space because this software exists, but as they point out, it’s mostly used by large fleet operators. Ford says, “That’s fine when we sell Fords to large fleet operators that will work with that software, it’s not a problem,” but they have a big opportunity. They think with the smaller and mid-sized fleets, a lot of their commercial customers who don’t have access to those big software packages if they can just get it one by one as they buy the new trucks and for a modest fee that’s affordable to them and scaled to their business. They think that’s a big opportunity for them because there isn’t really anybody in that space who can do it the way they can.

Should you invest $1,000 in Ford Motor Company right now?

Before you consider Ford Motor Company, you’ll want to hear this.

Our award-winning analyst team just revealed what they believe are the 10 best stocks for investors to buy right now… and Ford Motor Company wasn’t one of them.