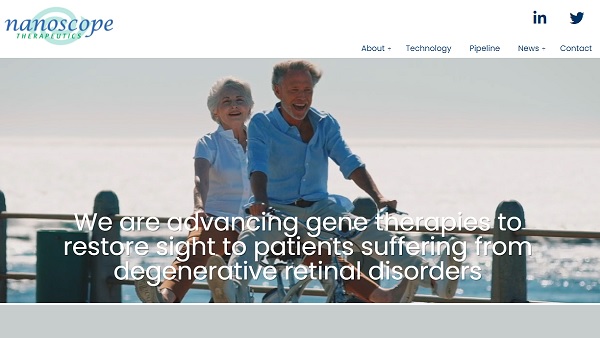 Nanoscope Therapeutics Inc., a clinical-stage biotechnology company that is developing gene therapies for the treatment of retinal diseases, announced that vision improvements for all evaluated advanced retinitis pigmentosa (RP) patients persisted through one year following a single intravitreal injection in a Phase 1/2a clinical study with MCO.

“We expect to begin the first randomized, placebo-controlled, double-masked Phase 2b multi-center optogenetic trial in the U.S. this summer to further validate our gene therapy’s ability to improve clinically meaningful vision in RP patients. If successful, it will be the first restorative drug for millions of RP patients worldwide,” said Nanoscope CEO Sulagna Bhattacharya.

Three patients received low dose (1.75 × 10 11 VG per eye) and eight received a high dose of 3.5 × 10 11 VG per eye. Florescence imaging of retina revealed successful gene transduction. At completion, 6 out of 7 (86%) high dose MCO-therapy subjects gained >0.3 logMAR (15 letters). Due to COVID-19, one of the high dose subjects was not evaluated after 31 weeks of treatment.

“The safety and efficacy results from the clinical study have demonstrated that the benefit-risk balance is strongly in favor of MCO for the treatment of vision loss due to RP. The patients have improved irrespective of underlying gene mutation(s) that caused the disease,” said Nanoscope CMO and Ophthalmologist Sai Chavala, MD.

All subjects had objective and subjective improvement in functional vision. The shape discrimination accuracy improved to >90% in all subjects compared to baseline. Further, the performance in two different mobility tests improved by 50% reduction in time to touch lighted panel. These test outcomes were highly correlated with improved patient reported outcomes.

“After MCO-treatment, the patients reported long-lasting improvements in outdoor light sensitivity and daily activities. We were pleasantly surprised that after eight weeks of treatment, some subjects could attend their follow-up visits during the study without the assistance of a chaperone. Some of the patients even gained the ability to read letters on a wall or even the large text in a newspaper, use a cell phone, watch television, and could even thread a needle.” said the Principal Investigator Dr. Santosh Mahapatra, Ophthalmologist and Eye Surgeon.

Nanoscope’s RP gene therapy, which has received orphan drug designation from the US Food and Drug Administration, uses a proprietary AAV2 vector to deliver the MCO genes into the retina. This mutation-independent gene therapy involves a single injection through the eye administered in a doctor’s office.

Samarendra Mohanty, Ph.D., Nanoscope’s President, Chief Scientific Officer and inventor of the technology, said, “Optogenetics is a powerful research tool, but had limited scope of clinical benefit because the opsins had a narrow band of activation, unlike natural light environment. MCO is sensitive to broadband light and activatable by ambient light, thus eliminating the risk of photo-toxicity from long-term continuous use of external intense light stimulation devices.”

About RP
In normal eyes, opsins are expressed by photoreceptor cells and intrinsically photosensitive Retinal Ganglion Cells (ipRGCs) in the retina, and when activated by light they trigger the physiological process of vision. RP encompasses a group of rare genetic disorders in which the retina’s photoreceptor cells degrade over time, leading to impaired vision and eventual blindness. These disorders are believed to be linked to over 60 different gene mutations.