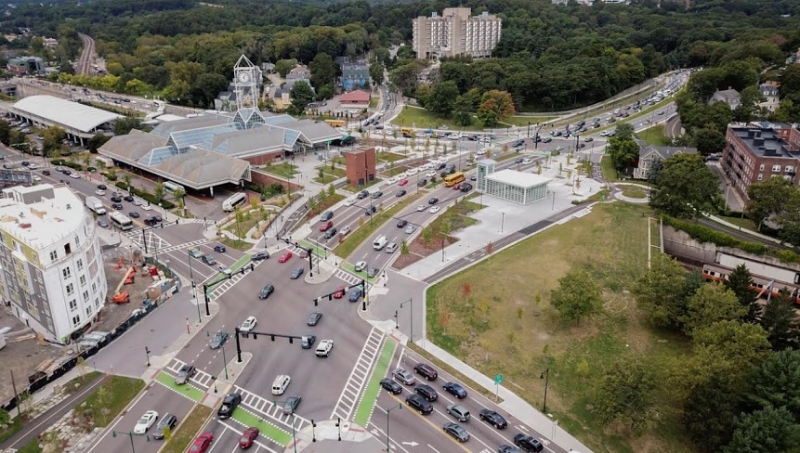 The American Council of Engineering Companies of Massachusetts (ACEC/MA) has named HNTB as a winner of their 2020 Bronze Engineering Excellence Award for their work on the Casey Arborway Project in Jamaica Plain, MA.

HNTB served as lead designer for Massachusetts Department of Transportation’s (Mass DOT) demolition of the structurally-deficient Monsignor William J. Casey Overpass and Massachusetts Bay Transportation Authority’s (MBTA) Forest Hills Station upper busway canopy, north headhouse and vent structure and the construction of an at-grade parkway system, expanded transit hub for bus and subway access and new facilities for pedestrians and bicycles. The project improved safety and mobility for all modes and users, incorporating the multimodal mobility and livability measures defined during the year-long planning study. The project included the reconstruction of 12 intersections; construction of a fully accessible north headhouse at the MBTA Forest Hills Orange Line subway station; reconstruction of the MBTA upper busway canopy and construction of the busway extension structure; and replacement of the MBTA Orange Line tunnel emergency ventilation system. Four miles of sidewalks and paths were expanded and widened, with improved pedestrian desire lines and accessibility. Three miles of new off-street bicycle paths were added, connecting the Southwest Corridor Park paths to the Arboretum and Franklin Park and removing a critical gap in bicycle infrastructure.

These updates have reconnected the historic Frederick Law Olmsted-designed Emerald Necklace park system and enhanced the surrounding neighborhood, creating a renewed urban streetscape and integrating all users into this historic greenway. HNTB was supported by major subconsultants McMahon Associates for traffic analysis and AECOM for transit station design.

HNTB Corporation is an employee-owned infrastructure firm serving public and private owners and contractors. With 106 years of service in the United States, HNTB understands the life cycle of infrastructure and addresses clients’ most complex technical, financial and operational challenges. Professionals nationwide deliver a full range of infrastructure-related services, including award-winning planning, design, and program and construction management. They have Massachusetts offices in Boston and Chelmsford.

“The Engineering Excellence Awards program recognizes engineering firms for projects that demonstrate a high degree of achievement, value and ingenuity,” said Jenn Howe, President of the American Council of Engineering Companies of Massachusetts and Principal and Vice President at SMMA, Symmes Maini & McKee Associates. “Entrants are rated by an independent panel of judges from the architectural community, the construction industry, academia, the media, and the public sector on the basis of uniqueness and originality; future value to the profession and perception by the public; social, economic and sustainable development considerations; complexity; and successful fulfillment of the client/owner’s need, including schedule and budget. We congratulate them and thank them for their contributions to improving the quality of our everyday lives.”

The American Council of Engineering Companies of Massachusetts (ACEC/MA) is the business association of the Massachusetts and Rhode Island engineering industry, representing over 120 independent engineering companies engaged in the development of transportation, environmental, industrial, and other infrastructure. Founded in 1960 and headquartered in Boston, MA, ACEC/MA is a member organization of the American Council of Engineering Companies (ACEC) based in Washington, DC. ACEC is a national federation of 51 state and regional organizations. For more information on ACEC/MA, visit their website at www.acecma.org. ACEC/MA is undertaking an awareness campaign to educate the public on the many contributions engineers make (or the engineering innovations) in everyday life through their hash tag #EngineeringGoFigure. To Follow us on Twitter: @ACECMA