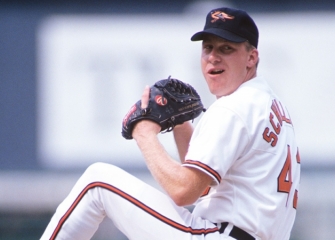 David Ginsburg, who has covered Baltimore sports for the Associated Press for nearly three decades, shared on Glenn Clark Radio Jan. 2 that he voted for four players as part of his 2020 Baseball Hall of Fame ballot: Barry Bonds, Roger Clemens, Derek Jeter and Curt Schilling.

This marked the first time Ginsburg ever voted for Schilling, who is in his eighth year of eligibility on the Baseball Writers’ Association of America ballot. Schilling’s name was checked on 60.9 percent of ballots last year; 75 percent is needed for induction. Even if he doesn’t get the nod this year, Schilling is on pace to make gains toward eventual election, according to Ryan Thibodaux’s tracking of public ballots.

Schilling is one of the best starting pitchers not enshrined in the Hall of Fame; his career rates similarly with recent inductees Mike Mussina and Tom Glavine, according to JAWS. Schilling pitched in the big leagues from 1988-2007, compiling a 216-146 record, 3.46 ERA, 3,116 strikeouts and 4.38 strikeout-to-walk ratio.