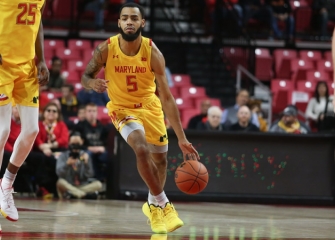 Eric Ayala sprinted ahead of the pack, took the outlet pass and broke for the rim. The Maryland men’s basketball sophomore guard had one man to beat during an early December matchup against Notre Dame. He and Fighting Irish senior forward Rex Pflueger leapt at the same time from roughly the same spot, halfway up the lane. Ayala won the battle, slamming it down as Xfinity Center erupted. He turned to the crowd and let out a roar before scampering back on defense.

Ayala isn’t known for flashy moments, although his highlight reel is becoming sneaky impressive. He lost 10 pounds this offseason, which has helped improve his explosiveness. And with a year of college hoops experience, the 6-foot-5, 195-pound combo guard knows how to more consistently be in the right spot.

“I’m still a little surprised myself,” Ayala said of the dunk. “I put a lot of a lot of work this offseason into my body and it’s starting to pay off. It’s all coming along.”