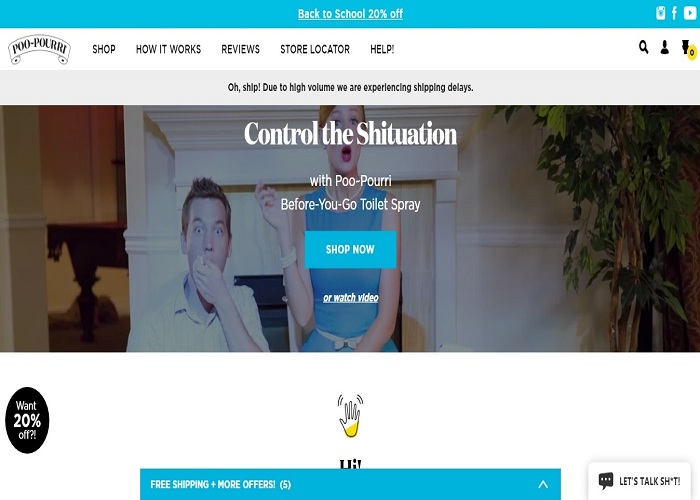 ​Poo~Pourri, the brand known for its highly effective, original before-you-go toilet spray, is pleased to announce the appointment of Jeff Berry as the brand’s CEO. Company founder and Poo~Pourri creator, Suzy Batiz, will shift into the role of Chairwoman & CVO (Chief Visionary Officer). Batiz, who has led the company since its inception in 2007 and has grown Poo~Pourri into a nine-figure business empire with over 100 million bottles sold worldwide, will remain the creative force behind the business as she focuses her efforts on innovation, brand promotion, product development and helping others transform their lives through her eight-week online program, ALIVE OS™. Batiz will remain at the helm of rapidly growing home cleaning and lifestyle brand supernatural as Creator and CEO. In his new role, Jeff Berry will be responsible for maintaining the success of Poo~Pourri, working in tandem with Batiz to establish and oversee the company’s short and long-term strategic goals as the 13-year-old brand enters its next phase of growth.

Prior to joining Poo-Pourri, Berry has had over 20 years of experience as an executive in Consumer-Packaged Goods and Media and Entertainment. Most recently, he was the President of Yes To, Inc., one of the largest natural skincare brands in the U.S., and he was directly responsible for sales, operations and finance. He has also served as the Chief Financial Officer of Creative Artists Agency and of Physicians Formula, Inc., as well the Head of Strategy and Treasurer of Del Monte Foods. He has also worked in management consulting with McKinsey and Company and Bain and Company, where most of his work focused on marketing strategies for CPG and retail clients.

“I am thrilled to announce Jeff Berry as Poo~Pourri’s new chief executive officer and the newest member of our Poo Crew,” said Suzy Batiz, founder of Poo~Pourri. “This next phase feels very much like sending a child off to college or into the workforce. At a certain point, I knew that both the business and I would grow more freely by releasing one another. Jeff is undoubtedly well-suited to mentor Poo~Pourri into this next phase of rocket ship growth. I am equally as excited to be moving into my new role as the company’s lead visionary where I can channel my energy into continuing to lead brand innovation and promotion. I launched Poo~Pourri in 2007 as a way to transform the bathroom experience and I’m thrilled to continue to bring that creativity to the brand and others, as I not only serve as Chairwoman & CVO for Poo~Pourri, continue to expand supernatural as creator and CEO, but also work with students through my transformative ALIVE OS™ program.”

“Under Suzy Batiz’s leadership, Poo~Pourri has become a household name and for many, has revolutionized their bathroom experience by working to remove the stigma against pooping while simultaneously masking the odor,” said Jeff Berry, CEO of Poo~Pourri. “Poo fans appreciate our savviness when it comes to understanding them as consumers and I am excited to work hand-in-hand with Batiz and team to continue to deliver best in class products to our consumers.”

To learn more about Poo~Pourri, visit www.PooPourri.com. Additional information on ALIVE OS™ can be found at www.aliveos.suzybatiz.com.

Founded by serial creator Suzy Batiz in 2007, Poo~Pourri, the original Before-You-Go Toilet Spray, stops bathroom odor before it begins. With 350 million combined video views and over 100 million bottles sold worldwide, Poo~Pourri has become an internationally known, category inventor and start-up success transforming the way we all think about pooping. Poo~Pourri is sold in 40,000 retail locations globally including Costco, Target, CVS, Walgreen’s, Bed Bath & Beyond, Ulta, Amazon.com (with over 20,000 5-star reviews!). Poo~Pourri earned the Good Housekeeping Seal of Approval in 2013 and an Edison award in 2014. The company has been ranked on Inc.’s 5000 Fastest Growing Companies since 2015 and is certified as a Women Owned Business (WBENC). To learn more, visit www.PooPourri.com.