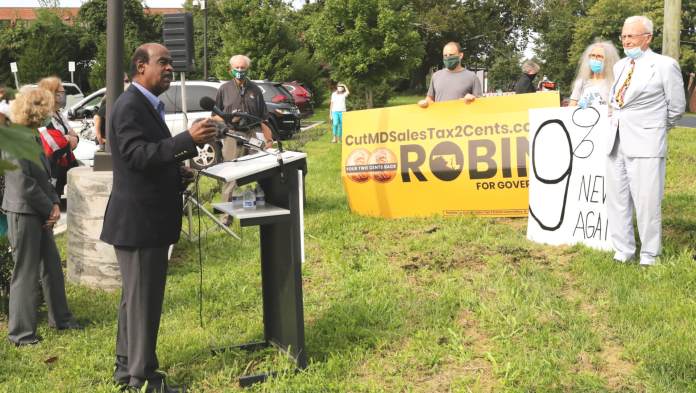 Former Montgomery County executive Isiah Leggett speaks out against a ballot initiative on property taxes sponsored by anti-tax activist Robin Ficker, who looks on. Ex-congresswoman Connie Morella is at the far left. Photo by Glynis Kazanjian

​It took 38 minutes to ride my bicycle from home to a news conference in front of the Dennis Avenue Health Center in Silver Spring the other day.

Over those six miles, it seemed like I had traveled back approximately two decades.

Former county executive Ike Leggett (D) was there. So was former congresswoman Connie Morella (R). So, shouting his opposition and wearing a seersucker suit, was anti-tax gadfly Robin Ficker.

As if that wasn’t enough nostalgia, Patrick Lacefield, who spent 20 years as a public information officer with the county government before retiring at the end of Leggett’s tenure in December 2018, was on hand as the press Sherpa, jokingly quoting the only memorable line from “Godfather 3,” uttered by Al Pacino: “Just when I thought I was out, they pull me back in.”