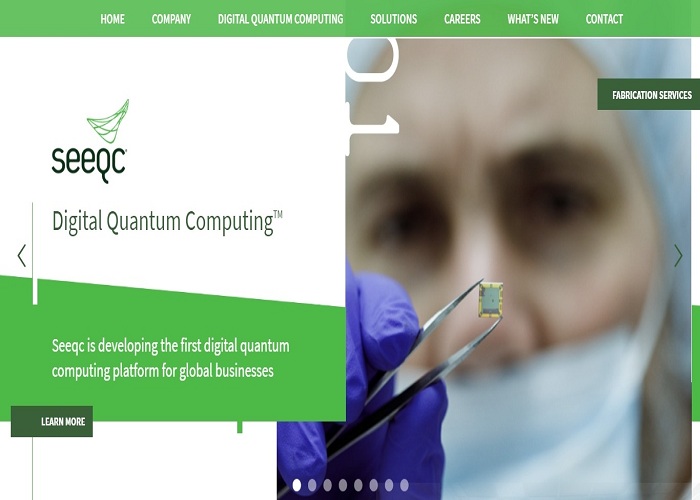 ​ELMSFORD, N.Y.–(BUSINESS WIRE)–Seeqc, the Digital Quantum Computing company, today announced it has secured a total of $22.4 million in its Series A fundraising, led by the EQT Ventures fund, to advance commercially viable application-specific quantum computing systems. In addition to EQT Ventures, one of the largest venture capital funds in Europe, Swedish-based FAM AB, a privately owned holding company owned by the three largest Wallenberg Foundations, also participated in the round. Ted Persson, Partner and investment advisor at EQT Ventures, will also join Seeqc’s board of directors.

The Series A funding also includes $5 million from M Ventures, the strategic, corporate venture capital arm of Merck KGaA, Darmstadt, Germany. The M Ventures funding was first announced in April 2020. Additional investors in the Series A round include BlueYard Capital, New Lab Ventures and the Partnership Fund for New York (PFNY).

By integrating superconducting qubit chips, proprietary Single Flux Quantum (SFQ) application-specific integrated circuits (ASICs) and SFQ-based 10-40 GHz superconductive classical co-processors, Seeqc can deliver a new level of cost-effectiveness and enable new functionalities in quantum computing. In terms of scalability, the company is eliminating many of the challenges of building quantum computers with thousands or even millions of qubits. Other industry approaches to quantum computing involve unwieldy systems requiring numerous, costly coaxial cables and complex CMOS readout/control for each qubit. These systems can’t scale effectively to meet the needs of businesses.

In addition to reducing system complexity, latency and cost, Seeqc’s unique expertise in SFQ for circuit design and manufacture enables the company to engineer systems that operate at about four orders of magnitude lower energy compared to equivalent CMOS-based systems. This is another critical element to building a scalable quantum-classical architecture.

The company has deep experience in superconductor circuits and owns and operates one of the only multi-layer superconductor commercial chip foundries in the world capable of producing complex SFQ integrated circuits. This unique capability provides the underlying infrastructure to design, test and manufacture quantum-ready superconductor systems for a variety of applications.

“This investment in Seeqc is an important step forward for industrial-grade quantum computing on the global stage. Seeqc is focusing its approach on industries like chemical engineering, machine learning/AI, manufacturing, and pharmaceutical development,” said John Levy, co-founder and co-CEO of Seeqc. “The EQT Ventures teams’ expertise in these industries, along with its collaborative approach to working with its portfolio companies, will be an invaluable resource in helping Seeqc grow and work towards quantum-powered breakthroughs in the coming years.”

EQT Ventures will serve as both a financial and strategic investor for Seeqc, helping the company continue its development of quantum computing technology and identify opportunities to commercialize quantum computing in the industrial sector. The investment in Seeqc was led by EQT Ventures’ newly-formed frontier technology team, headed up by Ted Persson. This team focuses on companies that are not only set to reshape entire industries but unlock the next frontier of technological breakthroughs. The formation of the frontier technology team follows EQT Ventures’ investments in companies such as Varjo, Einride, 3D Hubs and Heart Aerospace.

“Quantum computing will soon transcend the realm of purely academic exploration,” said Ted Persson, Partner and investment advisor at EQT Ventures. “The groundwork to unleash the true potential of quantum computing by lowering the complexity of commercialization is happening right now and John, Oleg, Matt and the rest of the Seeqc team are leading the charge. Bringing together one of the world’s most experienced commercial superconducting electronics teams to unlock the commercialization of quantum computing, Seeqc is set to play a key role in ushering in an entirely new paradigm and redefining human interaction with technology over the next few years. The EQT Ventures team is excited to be joining and supporting Seeqc on its journey ahead.”

Joining EQT Ventures is FAM AB, a Swedish private holding company owned by the three largest Wallenberg Foundations. Through the Foundation’s holding in Investor AB and FAM AB, the Foundations have ownership interests in some of the leading companies in the Nordic region such as ABB, AstraZeneca, Atlas Copco, Electrolux, Ericsson, EQT, Nasdaq, Saab AB, SAS, SEB, SKF and Stora Enso.

The Series A funding follows a $6.8 Million seed round by BlueYard Capital, Cambium, NewLab and the Partnership Fund for New York City. This investment brings Seeqc’s total venture funding to over $29 million. In 2019 Seeqc gained significant infrastructure and intellectual property (IP) when the company spun off from Hypres, Inc., the world’s leading developer of superconductor electronics. Prior to this spinoff, Hypres had garnered over $100 million from public and private investments to develop a multi-layer commercial superconductor chip foundry and IP, almost all of which now belongs to Seeqc. Since then, Seeqc has greatly expanded and augmented the assets gained from Hypres by increasing the number of patents held by 50 percent, tripling overall production capacity, and is in the process of constructing a new state-of-the-art 5,000-square-foot millikelvin testing facility in New York. Seeqc has superconductive test facilities at the University of Naples, and in 2021 will build a product development and test center in London.

“As an industry in pursuit of commercialization of quantum computers, we see the challenge as a hard engineering effort more than a reliance on breakthrough scientific discovery. Quantum computing is poised to be the world’s next truly global computing platform technology, and we are excited to see Fortune 500 companies gain access to its world-changing power,” concluded Levy.

The company is one of the first companies to have built a superconductor multi-layer commercial chip foundry and through this experience has the infrastructure in place for design, testing and manufacturing of quantum-ready superconductors. Seeqc is a spin-out of Hypres, the world’s leading developer of superconductor electronics. Seeqc’s team of executives and scientists have deep expertise and experience in commercial superconductive computing solutions and quantum computing. Seeqc is based in Elmsford, NY with facilities in London, UK and Naples, Italy.

EQT Ventures is a multi-stage VC fund that partners with the most ambitious and boldest founders in Europe and the US. The fund is based in Luxembourg and has investment advisors stationed in Stockholm, Amsterdam, London, San Francisco, Berlin and Paris. Fuelled by some of Europe’s most experienced company builders and scalers, EQT Ventures helps the next generation of entrepreneurs with the capital and hands on support needed to build global winners.

FAM is a Swedish-based privately owned holding company that manages assets as an active owner with a long-term ownership horizon. FAM is owned by the three largest Wallenberg Foundations. Value creation and dividends from FAM grow the value of the Foundations and their ability to distribute grants to research and education mainly in the fields of medicine, technology, and natural sciences. The Foundations granted around SEK 2.4 billion in 2019 and around SEK 11 billion the last five years to excellent basic research and education at Swedish universities.