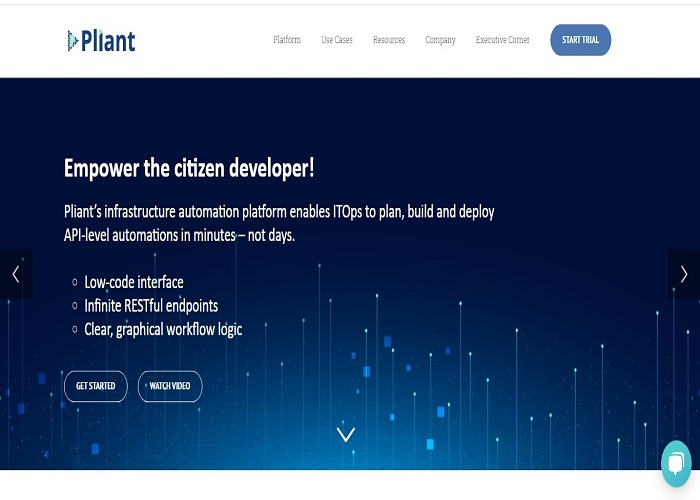 ​BOSTON–(BUSINESS WIRE)–Pliant, the leader in IT Process Automation, has secured additional funding for the company led by Gutbrain Ventures with participation from Azure Capital Partners, and BrightCap Ventures. The amount of the investment was undisclosed and follows the initial round of seed funding announced May 2019 for $2.5M, led by former SevOne founder and CTO, Vess Bakalov and backed by Newfund Capital, New Stack Ventures, and Leading Edge.

In addition, Bob Davoli, Managing Director at Gutbrain Ventures, will join Pliant’s board of directors starting immediately. “Our investment in Pliant aligns with the direction of many Fortune 1000 companies who need to accelerate their journey to IT automation,” said Bob Davoli. “The intuitive drag-and-drop UI provided by Pliant fundamentally changes how organizations acquire and manipulate data and devices in both their on-prem and cloud-based infrastructures.”

A part of the funding will be used to support the company’s continued innovation and development of its low-code/no-code automation platform. Pliant also plans to invest in accelerating its go-to-market strategy, including onboarding more marketing and sales support.

“We are privileged to be working under the tutelage of such forward-thinking investors, who not only validate the inherent and immediate need for Pliant’s IT automation solutions,” said Vess Bakalov, Pliant CEO, “but who also suggest that the secure automation platform power provided by Pliant is unlike anything the industry has experienced before.”

The Pliant platform enables DevSecOps teams along with non-technical citizen developers, to securely automate processes with unprecedented speed and ease. Using the UI along, developers can drag and drop low-code “action blocks,” to build automation across more than 70 different technology vendors. Currently, Pliant offers more than 100,000 APIs that have been rendered into efficient, easy-to-use blocks and include all of the necessary debug code and documentation required to quickly produce cross-domain automation.

Visit https://pliant.io/ to learn more about how Pliant is transforming the way organizations are leveraging automation to accelerate digital initiatives.

Pliant believes moving at the speed of digital business requires a fundamental change in how IT organizations deploy and manage technology. A rapidly changing and complex infrastructure demands a platform that provides initial automation of provisioning and reduction of human error as well as ensures compliance and automates real-time mitigation of issues. Pliant’s unified platform for IT process automation simplifies and accelerates how ITOps teams can quickly develop and deploy workflow automation in response to the demands of complex IT processes. By transforming API code into low-code building blocks, Pliant is able to Automate and Transform all of the business’ digital processes.