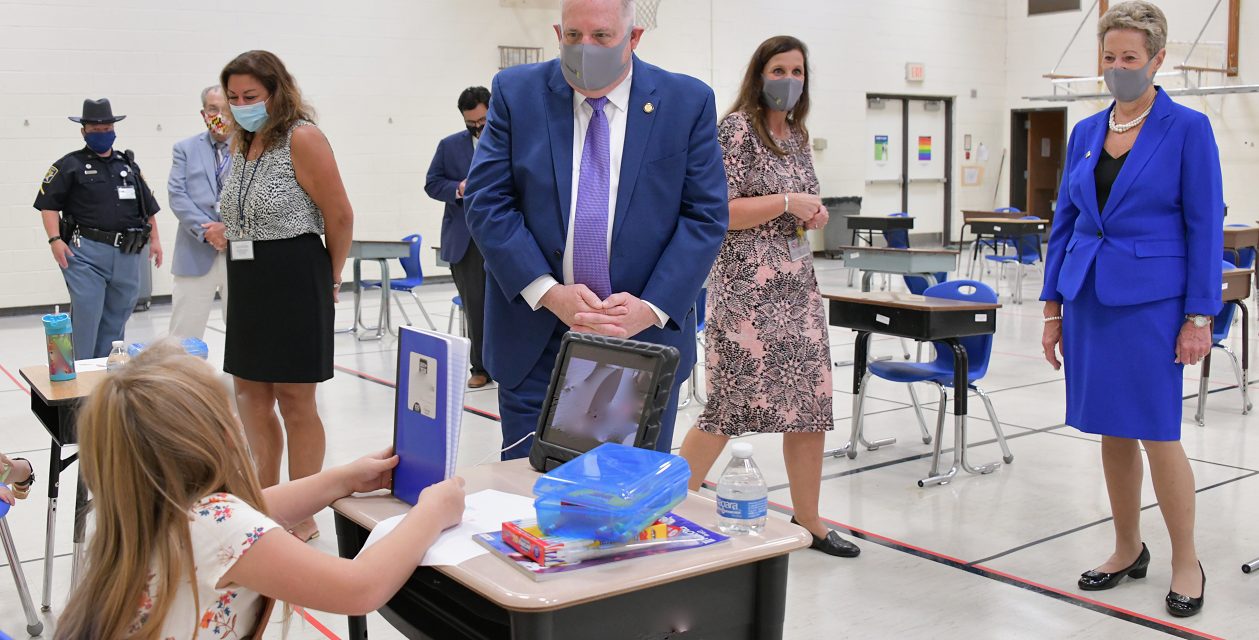 HOGAN HOPES ALL SCHOOLS HOLD IN-PERSON LEARNING: Gov. Larry Hogan visited three schools in Caroline County as they opened for limited in-person instruction on Tuesday, marking the start of a less-than-traditional school year for thousands of Maryland students, Bennett Leckrone reports for Maryland Matters. Hogan said eight jurisdictions declined to open for any in-person instruction for fall semester, but said he hopes those school systems reconsider and offer some in-person instruction to students who need it.

CONGRESSMEN SEEK MEDAL OF HONOR FOR BLACK WWII MEDIC: Members of Maryland’s congressional delegation teamed up on Tuesday to emphasize their support for bipartisan legislation that would posthumously award the Medal of Honor to an African-American World War II veteran from Montgomery County who saved dozens or possibly hundreds of lives on D-Day, Bryan Renbaum of MarylandReporter is reporting.

TRUMP TAX BREAK GETS LITTLE SUPPORT IN MARYLAND: President Donald Trump has authorized a temporary break on some federal taxes deducted from paychecks, but the plan to boost workers’ pay during the pandemic is gaining little traction in Maryland and elsewhere, Lorraine Mirabella of the Sun reports.

FRANCHOT SUGGESTS SHUTTERING MES: The Maryland Environmental Service should be permanently disbanded following the controversy over a six-figure severance payment made to a former director who left to become Gov. Larry Hogan’s chief of staff, says Comptroller Peter Franchot. He made the comments Tuesday during an interview with the Daily Record editorial board, Bryan Sears reports.

UM ARENA PICKED AS POLLING CENTER: The University of Maryland’s Xfinity Center has been selected as an advanced polling center for the November general election, the athletic department highlighted Tuesday, Daniel Oyefusi of the Sun writes.

3 STATES ADD MARYLAND TO COVID TRAVEL ADVISORY: New York state, New Jersey and Connecticut have added Maryland and three other states to their latest coronavirus travel advisory, requiring individuals who visit the state to self-quarantine for 14 days, Phil Davis of the Sun writes.

PITTMAN BLASTED FOR DELAYING STAGE 3 REOPENING: More than a dozen Anne Arundel County residents criticized County Executive Steuart Pittman’s coronavirus response, called for the removal of his powers, and called for the county’s reopening during the first council meeting in which live audio testimony was available, Olivia Sanchez reports for the Capital Gazette. The complaints come less than a week after Pittman opted to resist moving the county to Stage Three, saying that the unexplained rise in cases has made it unsafe to allow additional reopenings.

42 NEW CARROLL CASES OVER HOLIDAY WEEKEND: Over the Labor Day weekend, the Carroll County Health Department confirmed a total of 42 new cases of COVID-19 among community members, more than half of which were among people younger than 30, Brian Compere of the Carroll County Times reports.

WA CO UP 68 CASES IN A WEEK: Julie Greene of the Hagerstown Herald-Mail reports that Washington County officials reported 68 more cases of COVID-19 in the county in roughly the past week. There have been 1,378 confirmed novel coronavirus cases in the county, according to a Tuesday email from the county’s COVID-19 Joint Information Center. That compared to 1,310 cases listed in a Sept. 1 email from the center.

METRO REFORM SAID TO BE BLOCKED BY SENIOR MANAGERS: Fed up with years of deadly incidents and persistent safety lapses at Metro, Congress in 2017 approved the creation of an independent oversight body with the power to force transit officials to make changes. On Tuesday, federal and state officials expressed outrage and alarm over allegations that that critical body, the Washington Metrorail Safety Commission, was being undermined by agency managers, including one of its most senior officials, Justin George and Michael Laris of the Post are reporting.

DUTCH TO PROPOSE ‘HERO’ PAY FOR MEDICAL WORKERS: Rep. Dutch Ruppersberger will propose federal legislation this week that awards “hero” pay, or bonuses, to hospital workers on the front lines of the coronavirus pandemic, Hallie Miller of the Sun reports. Ruppersberger, a Democrat representing Maryland’s 2nd Congressional District and a former Baltimore County executive, named the bill after Dr. Joseph Costa, the beloved director of the critical care unit at Baltimore’s Mercy Medical Center who died of COVID-19 in July.

TRONE MEETS RECOVERING ADDICTS: In a small office space in a business park on Thomas Johnson Drive in Frederick, nearly half a dozen women gathered in a small circle with Rep. David Trone (D-Md.) and some staff members. The women were all patients at Ideal Option, a treatment clinic in Frederick that helps those recovering from addiction through medical-assisted treatment, Steve Bohnel of the Frederick News-Post reports.

FROSTBURG COUPLE SEEK WHITE HOUSE AS WRITE-INS: Frostburg resident Albert Raley has his name on the ballot as a write-in candidate in 42 states and the District of Columbia as he continues with his run for the White House. Raley, who has selected his wife Darlene M. Raley as his running mate, began pursuing the write-in candidacy last fall, Greg Larry of the Cumberland Times-News reports.