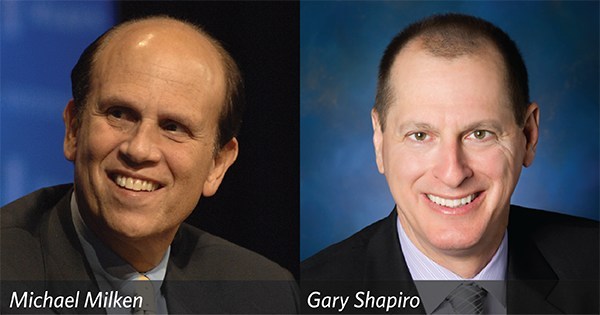 Michael Milken, Chairman of the Milken Institute, and Gary Shapiro, president and CEO of the Consumer Technology Association (CTA), were elected to the Focused Ultrasound Foundation’s board at its August 20 meeting. Their expertise will broaden the effectiveness of the board, as it works to expand the use of focused ultrasound for a wide variety of serious medical disorders.

Mike Milken has been recognized as “The Man Who Changed Medicine” by Fortune magazine and has dedicated nearly half a century to accelerating medical solutions and advancing public health. He founded the Milken Institute, a nonprofit, nonpartisan think tank whose scholars lead an international dialogue on solutions in economics, health, aging, human capital, philanthropy and capital markets. The Institute hosts more than 250 annual events around the world. One of its 10 centers, FasterCures, is a close partner of the Focused Ultrasound Foundation, each sharing in the effort to remove barriers to progress in medical research.

Milken graduated from the University of California, Berkeley, with highest honors and earned his MBA at the Wharton School of the University of Pennsylvania. He has been involved with the Foundation since joining the Council in 2012.

Shapiro is a vocal advocate for innovation and technology in Washington, DC, having testified before Congress dozens of times. Shapiro has been named a top lobbyist by The Hill, one of the 100 most influential people in Washington by Washington Life magazine and a Tech Titan by Washingtonian magazine.

Shapiro is a New York Times bestselling author, whose books include “Ninja Future: Secrets to Success in the New World of Innovation,” “Ninja Innovation: The Ten Killer Strategies of the World’s Most Successful Businesses,” and “The Comeback: How Innovation will Restore the American Dream.”

Shapiro earned his law degree from the Georgetown University Law Center and is a Phi Beta Kappa graduate with a double major in economics and psychology from Binghamton University.

“The addition of Michael and Gary – two of the most highly acclaimed thought leaders and influencers – will amplify the Foundation’s ability to achieve its vision of improving the lives of millions of patients globally with life-threatening and disabling conditions by accelerating the development and adoption of focused ultrasound,” adds Foundation Chairman Neal F. Kassell, MD.

About the Focused Ultrasound Foundation

The Focused Ultrasound Foundation was created to improve the lives of millions of people worldwide by accelerating the development of this noninvasive technology. The Foundation works to clear the path to global adoption by organizing and funding research, fostering collaboration, and building awareness among patients and professionals. Since its establishment in 2006, the Foundation has become the largest nongovernmental source of funding for focused ultrasound research. For more information, visit http://www.fusfoundation.org.​