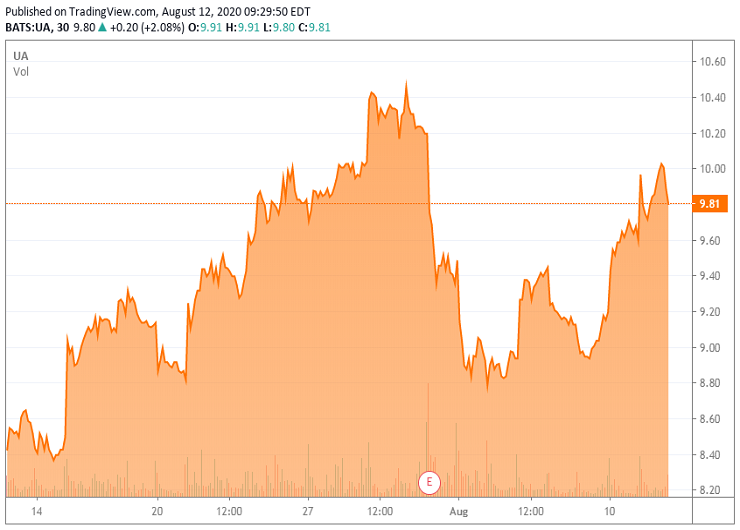 After showing poor performance in Q2, we continue to believe that Under Armour (UA, UAA) has limited upside potential. The apparel company failed to create shareholder value when the market was booming, and it’s unlikely to execute a turnaround in the current environment.

Under Armour’s decision to cut its ties with UCLA and sell its digital app MyFitnessPal shows that the company is unable to compete with Nike (NKE) and Adidas (OTCQX:ADDYY), as it doesn’t have enough financial flexibility to expand and is forced to shrink its business to stay afloat. Under Armour also doesn’t have any catalysts that could drive its sales in the foreseeable future. Without a strong direct to consumer offering and a solid balance sheet, it’s unlikely that the business will create shareholder value in the near term. For that reason, we stick to our opinion that it’s better to avoid the stock.

From Bad to Worse

After reaching its peak in late 2015, Under Armour stock started to lose value and right now trades around its all-time low. While Under Armour was able to drive its revenues higher in recent years, its business was barely making any money in the last decade. The company has been constantly trying to execute a turnaround, but until this day, no meaningful progress has been made and there are no catalysts that could improve its financial situation. The business has lost money during the recent holiday season, and it has been unprofitable in the last three quarters. To this day, Under Armour still doesn’t have a strong direct to consumer offering, it continues to have little online presence in comparison to its major peers and it relies too much on its retail partners like DICK’s Sporting Goods (DKS), TJ Maxx (TJX) and others to sell its merchandise. The problem with this business model is that Under Armour is unable to drastically improve its margins, and that’s one of the main reasons why the company can’t generate profits.

The earnings results for Q2 showed how weak Under Armour’s business is. The company’s revenue from April to June was down 41% Y/Y to $708 million, while its net loss was $183 million. The company’s sales were also down across all its regions. and without a strong direct to consumer offering, they will stay at distressed levels in the upcoming quarters.