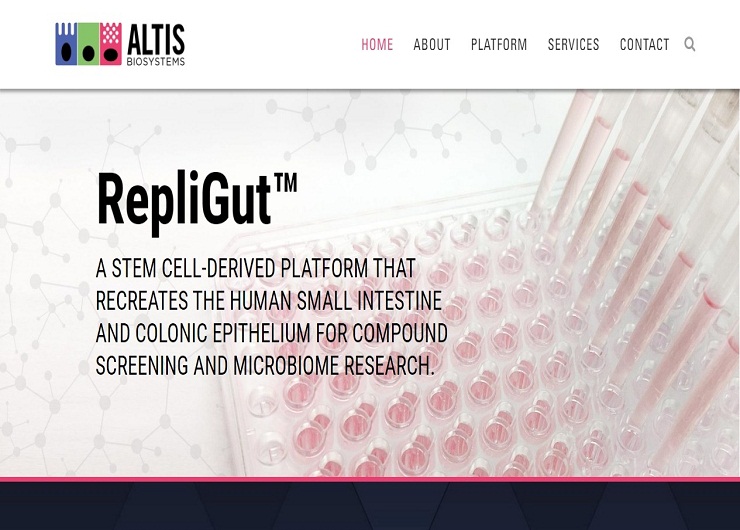 Altis was formed as a spin-out of the UNC-Chapel Hill Biomedical Engineering Department and developed a technology platform that produces a layer of human intestinal stem cells of either the small or large intestine. Called RepliGut, it recreates the human intestinal epithelium to improve compound screening, disease modeling and microbiome research for pharmaceutical and biotechnology companies. The technology was pursued to make drug discovery faster, cheaper and safer, and to reduce the need for animal testing.

Altis received a National Institutes of Health (NIH) research award and multiple grants to develop a microfluidic organ-on-a-chip mimic of the human colon, and commercialized RepliGut by providing contract research services on the technology platform to pharmaceutical companies, currently including half of the top-20 Big Pharmas.

With this seed series funding round, Altis will welcome new additions to its Board of Directors. These include Joe McMahon, former CEO of KBI Biopharma and k-Sep® Systems, Sue Mahony, former SVP and President of Lilly Oncology, and Sam Franklin, UNC graduate, nephrologist, and member of VentureSouth.

VentureSouth is one of the largest early-stage investment groups in the Southeast and invested over $1 million as the first and largest investor in the fundraising. It was joined by local investors including RTP Capital and Hatteras Ventures, and other syndicate partners across the country including Atlanta Technology Angels and Central Texas Angel Network.

Michael Biron, CEO of Altis, said, “We are particularly pleased to have oversubscribed our fundraising target by nearly 50%, despite the challenges of the current global health environment, and are looking forward to deploying this new funding as we accelerate the development and deployment of additional biologically accurate and comprehensive intestinal models with our pharma and biotech partners.”

Altis Biosystems was founded to address the biopharmaceutical industry’s intense need for more accurate drug screening methods using in vitro platforms, which can more closely replicate human biology. Altis developed its intestinal platform to be the next generation for in vitro testing during drug development, allowing scientists to develop safe and more effective drugs using normal human intestinal tissue, and reducing the time and cost of drug discovery.

Additional information is available at www.altisbiosystems.com