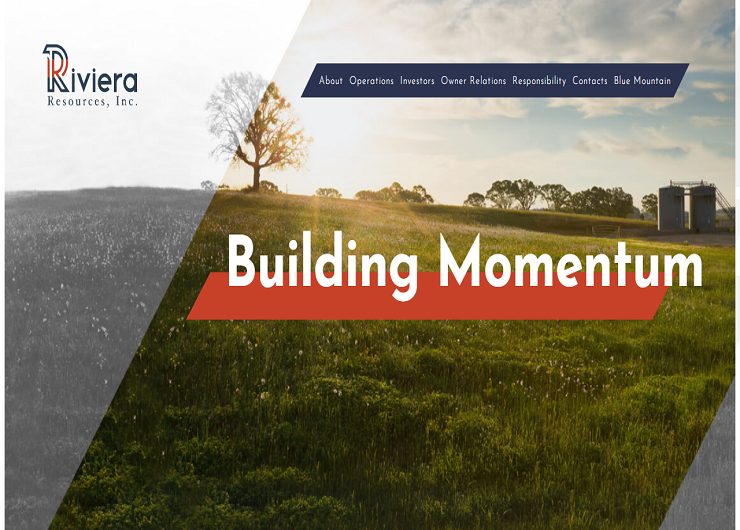 The Company highlights the following accomplishments:

David Rottino, Riviera’s President and Chief Executive Officer, commented, “In the second quarter, the Company outperformed upstream Adjusted EBITDAX guidance and returned approximately $105 million to shareholders through two separate distributions. Furthermore, we significantly reduced operating and general and administrative costs during the second quarter by consolidating management of Blue Mountain within the Company’s existing executive management team. So far in 2020, we have closed four transactions for approximately $69 million, recently announced the sale of our interest in properties located in North Louisiana and the Anadarko Basin in Oklahoma for a combined contract price of $42.3 million and have engaged EnergyNet to market our remaining upstream assets. Once we close these remaining transactions, it will result in a complete exit from the upstream business. In addition, we continue to work closely with Tudor, Pickering, Holt & Co to explore a potential sale or merger for Blue Mountain.”

The Company has engaged EnergyNet to help sell its remaining upstream assets, with plans to close in the fourth quarter of 2020. After closing these transactions, the Company will completely exit the upstream business. Riviera will continue to own Blue Mountain Midstream LLC. Given the announced and planned sales, the Company has chosen not to provide guidance for its Upstream business.

The Board and management will consider using the proceeds from announced asset sales to make additional cash distributions to shareholders.

General and Administrative Cost Reduction Initiatives
The Company remains focused on finding ways to continue to reduce general and administrative costs. During the second quarter of 2020, we consolidated management of Blue Mountain with the Company’s existing executive management team, while continuing to maintain separate capital structures for each entity.

In the second quarter of 2020, Riviera Upstream’s general and administrative expenses, excluding share-based compensation expenses and severance expenses, were approximately $6.0 million, a decrease of 29% from the first quarter 2020.

In the second quarter of 2020, Blue Mountain’s general and administrative expenses, excluding share-based compensation expenses and severance expenses, were approximately $1.8 million, a decrease of 38% from the first quarter 2020.

Operating Expenses
The Company has taken several proactive steps to significantly reduce lease operating expenses, including a reduction in workforce, optimizing compression and well workover programs, and negotiating lower overall service costs. As a result, lease operating costs in the second quarter of 2020 were approximately $2.9 million.

Second Quarter 2020 Activity
In the second quarter of 2020, natural gas throughput on Blue Mountain’s system averaged 97 MMcf/d, an 18% decline compared to the first quarter of 2020. Starting in April, due to consistently low commodity prices, certain producers elected to shut-in portions of their production resulting in the lower throughput.

Given the dynamic environment, drilling uncertainty in the Mid-Continent region, and on-going strategic process, the Company has chosen not to provide third quarter guidance for Blue Mountain.

Balance Sheet and Liquidity
Riviera and Blue Mountain have established separate credit facilities. As of June 30, 2020, Riviera held approximately $55 million of cash, and there were no borrowings outstanding on Riviera’s revolving credit facility (the “Riviera Credit Facility”). Riviera had borrowing commitments of up to $30 million with available borrowing capacity of approximately $29 million, inclusive of outstanding letters of credit.