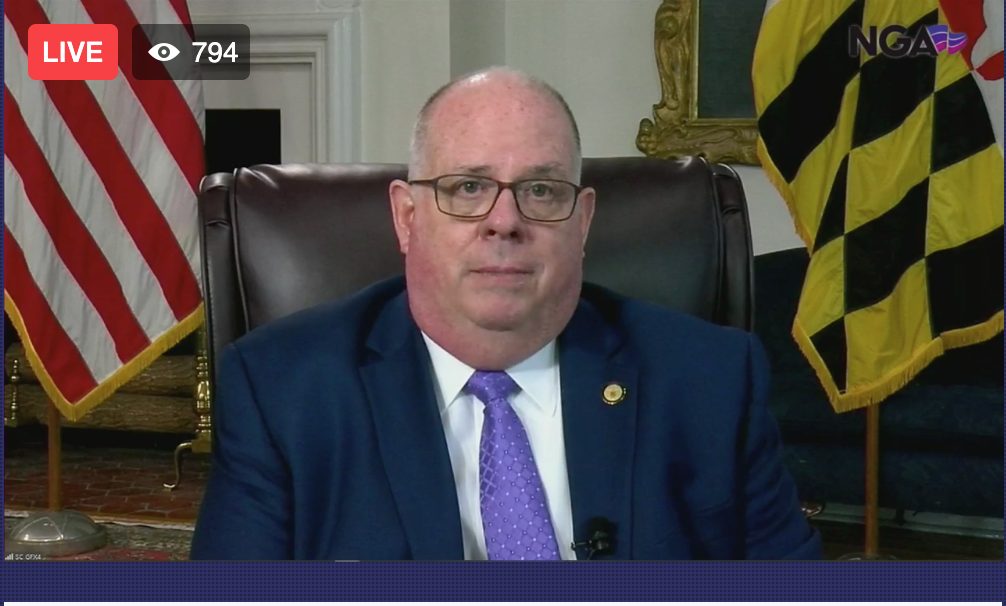 Gov. Larry Hogan spoke at a virtual meeting of the National Governors Association on Wednesday. It was his last time addressing the group as its chair (NGA Screenshot)

Gov. Larry Hogan applauded bipartisan cooperation among the nation’s governors in the fight against the coronavirus pandemic in his final address as chair of National Governors Association (NGA) at the group’s virtual summer meeting on Wednesday afternoon.

“We didn’t let the politics get in the way. And we didn’t hesitate to make the tough decisions. We followed the advice of the experts. We worked around the clock to build up our public health infrastructure, to expand our testing capacity, build contact tracing operations, and to provide lifesaving PPE (Personal Protective Equipment) to our doctors, nurses and first responders,” Hogan said.

He added: “Most importantly, in response to a silent enemy that doesn’t recognize state boundaries or political parties-we worked together.”

Hogan urged the nation’s governors to remain vigilant in the fight against the virus.

“Of course we all know that this crisis is far from over. We continue to battle this global pandemic and this economic collapse. And we will continue to push Congress and the administration to follow through on their commitment to provide additional critical funding for state governments, who are battling on the front lines.”

Hogan said he is confident that America will get through the pandemic.

“I have no doubt that together Americas governors will continue to lead and that we will continue to do whatever it takes to get our states and our nation back on track. Together we will do what America and Americans have always done in times of crisis. We will defeat this deadly virus together. We will get through this. And we will come back better and stronger than ever before.”

Hogan’s year-long term as chair increased his national exposure. The first two-term Republican governor of Maryland since the 1950s often walked a fine line between criticizing President Donald Trump’s handling of the pandemic and simultaneously serving as a liaison between the State House and the White House. Hogan has not ruled out running for president in 2024.

Hogan’s departure as chair comes the very day Maryland’s coronavirus positivity rate is at a record low-4.05%. The state’s positivity rate has been below 5% since the end of June, which is significantly better than that of most state’s in the country.

More than half of the new infections in the state are among residents under age 40.

There are 92,426 cases of COVID-19 in Maryland as of Wednesday morning, and 3,402 people in Maryland have died from the virus.

The state has tested more than 1.3 million people for COVID-19.