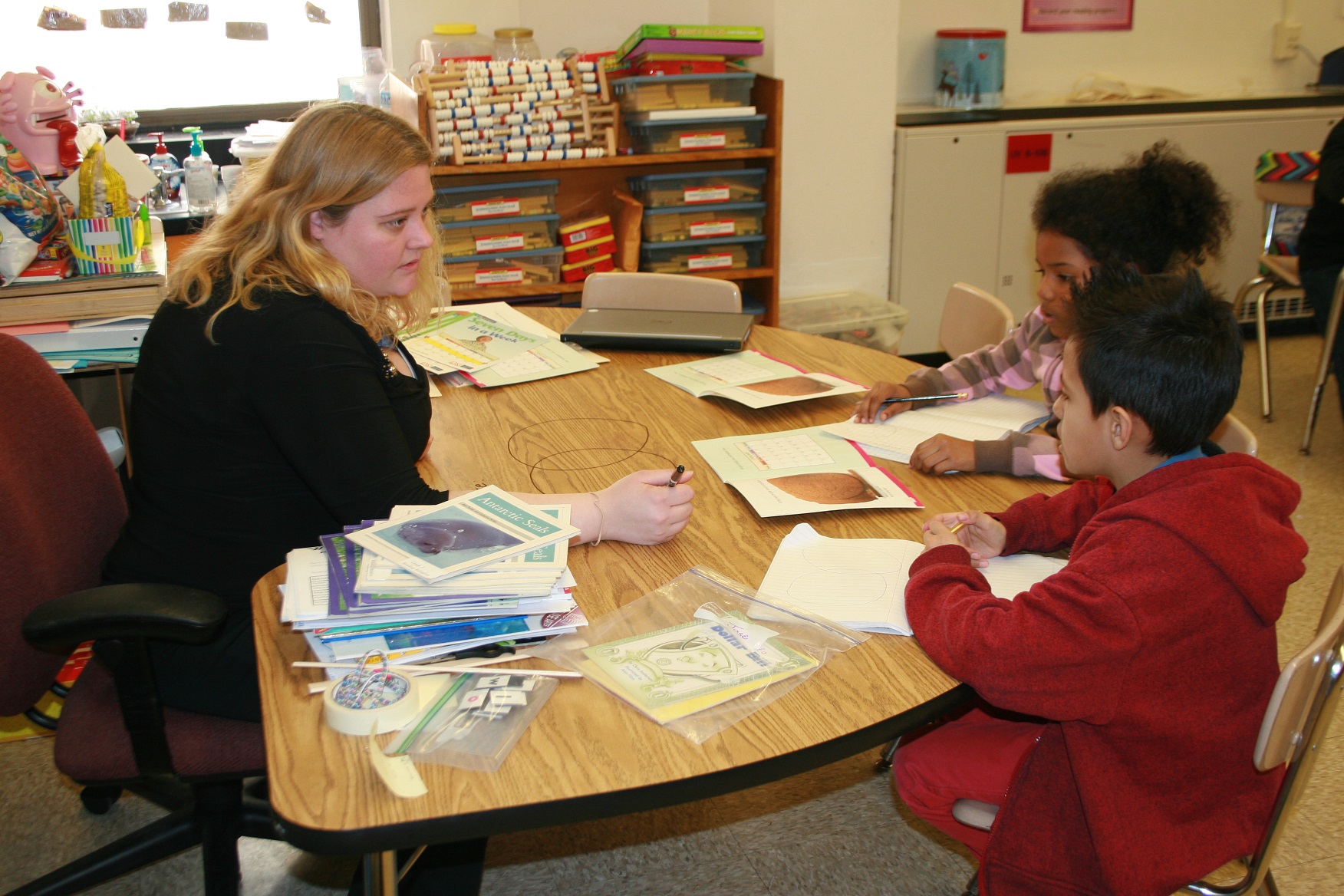 This photo was taken prior to the pandemic when teachers and students did not wear masks. Second grade teacher Ashley Thornton conducts a small group reading session, teaching Common Core standards, with Aaliyah and Jose at Gaithersburg Elementary School.

School staff would receive protection from lawsuits stemming from disciplining students under a proposed bill from Del. Robin Grammer, R-Baltimore, that is set to be heard in the General Assembly on Wednesday.

“We have significant problems with public education,” Grammer told Capital News Service on Thursday. “The discipline issues are real, very real, despite the politicking around it.” Teachers are afraid to intervene in bullying and other disciplinary problems for fear of lawsuits, and, he said, that’s meant fewer teachers or teachers leaving the profession early.

“Even though educators still are showing up every day doing the best they can with the resources—the very short resources—that we are given, the same respect is not being shown in all segments of the community,” she told Capital News Service on Friday.

The proposed bill, HB0137, aims to protect teachers who intervene in fights or other cases of student misconduct from any civil liability they may face regarding property damage or personal injury, provided they acted in good faith and without negligence. A hearing on the bill is scheduled for 2:30 p.m. on Wednesday, Jan. 25, before the House Judiciary Committee; it will also be streamed live on YouTube.

Current law states that the county board of education is held financially responsible in the event that an educator is sued and damages are awarded against them. The Code of Maryland Regulations also ensures that as of now, the county board must provide legal counsel to school staff if the action was performed “without malice” and if they were “acting within authorized official capacity.”

Dirks noted that the proposed bill would not alter current law too drastically, but would lay out specifically what a school staff member would and would not be liable for, and in what situations.

“Any time we can bring clarity and make sure that educators are allowed to intercede to protect students without fear is a good thing,” she said.

That was Grammer’s goal in introducing the bill during this session, even though a nearly identical one failed in the 2020 session.

“You look for simple ways that you could positively change policy to better the environment, regardless of what policy scope you’re looking at,” said Grammer. “I thought this was a really positive bill. It’s not revolutionary or groundbreaking, but it’s something you could do. It’s a little tweak that you can make to just tell teachers, if you’re stepping in to prevent someone from getting hurt, we have your back.”

He hopes the bill will give teachers more ability to control their classroom’s environment in a way that best serves their students.

“Making sure our students are safe is always paramount, and we’ve seen it time and time again where educators put their bodies on the line for their students,” said Dirks. “That happens with or without this piece of legislation, but it is good for educators to know that they are supported by lawmakers and the law in this situation.”

The act was first introduced during the 2020 Regular Session by former Delegate and Republican gubernatorial candidate Dan Cox. In addition to Cox and Grammer, 32 other delegates, including six Democrats still in the House,  sponsored the bill, then called HB802.

“You know, Delegate Cox tended to be a controversial person, and I suspect towards the end there, that’s probably why it failed,” Grammar said. “So I figured we bring it back, … give it a shot and see if we can get it done.”

In his testimony on the bill in 2020, Cox told lawmakers that teachers face challenges they didn’t expect.

“A teacher should not need to worry about personal liability when intervening in a small scuffle or a schoolwide brawl,” he said.  “Teachers should not have to worry that they will be sued if they stop one student from inflicting harm on another.”

Dirks, who also testified for the bill in 2020, agreed with Cox then on what the role of teachers should be.

“Educators need to be able to focus our attention on the academic needs and physical safety of our students without fearing reprisal or risk of civil liability as a result of good faith actions aimed at protecting them,” said Dirks in her 2020 written testimony.

While it passed in the House on March 11, 2020, the bill died after being referred to the Senate Judicial Proceedings Committee. Grammer said he hopes that with the freshman members of the House looking at it with new eyes, the bill will have enough support to become law.

“It’s well written, it’s very short. It’s passed unanimously and had bipartisan support,” Grammer said of the bill and its predecessor. “I think one of the opportunities this year is really to walk through all this policy and have the freshman members hear a lot of it, and for them it’s going to be brand new.”

Grammer said the current bill is the same as that passed by the House of Delegates during the 2020 legislative session.  This includes an amendment suggested by the Maryland Association for Justice that further specifies the staff member must have intervened in a “reasonably prudent manner” and the actions were not “grossly negligent, willful, wanton, or intentionally tortious.”

“We worked with this bill sponsor back in 2020 to improve the immunity provision to include a standard of conduct of reasonable prudence under the circumstances so that the bill was more clear in what conduct would be protected and what conduct would not be protected,” said George Tolley, who was MAJ’s legislative chair in 2020, of their proposed amendments.

Those who wish to testify on this bill will do so at the hearing on the 25. If passed, this act would go into effect Oct. 1.