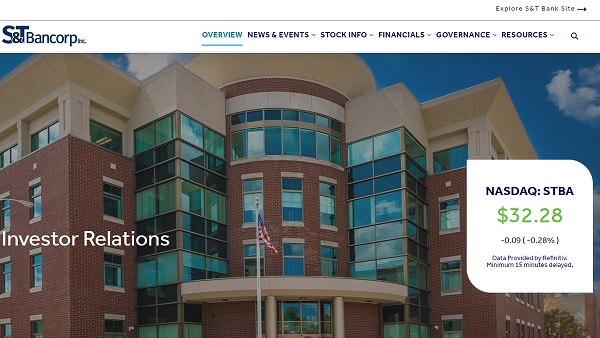 The Board of Directors of S&T Bancorp, Inc. (S&T) (NASDAQ: STBA), the holding company for S&T Bank with operations in Pennsylvania and Ohio authorized an extension of its $50 million share repurchase plan, which was set to expire on March 31, 2023, at its regular meeting held January 25, 2023. This repurchase authorization permits S&T to repurchase shares of S&T’s common stock through a combination of open market and privately negotiated repurchases up to the previously authorized $50 million in aggregate value. The plan has $29.8 million of remaining capacity and will expire on March 31, 2024. The specific timing, price, and quantity of repurchases will be at the discretion of S&T and will depend on a variety of factors, including general market conditions, the trading price of the common stock, legal and contractual requirements, and S&T’s financial performance. The repurchase plan does not obligate S&T to repurchase any particular number of shares. S&T expects to fund any repurchases from cash on hand and internally generated funds. Any share repurchases will not begin until permissible under applicable laws.

About S&T Bancorp, Inc. and S&T BankS&T Bancorp, Inc. is an $8.9 billion bank holding company that is headquartered in Indiana, Pennsylvania and trades on the NASDAQ Global Select Market under the symbol STBA. Its principal subsidiary, S&T Bank, was established in 1902 and operates in Pennsylvania and Ohio. S&T Bank was recently named by Forbes as a 2022 Best-in-State Bank. S&T Bank also received the highest ranking in customer satisfaction for retail banking in the Pennsylvania region by J.D. Power in 2022. For more information visit stbancorp.com or stbank.com. Follow us on Facebook, Instagram and LinkedIn.