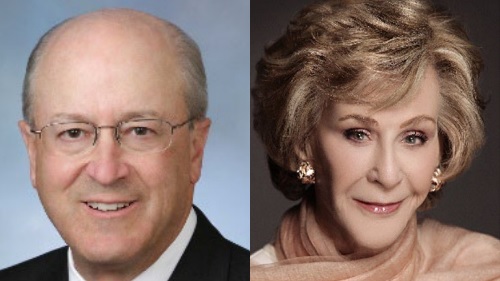 The MPT Foundation, Inc. has announced new leadership roles for its volunteer board of directors. During a recent meeting, the foundation’s board gave unanimous approval to the election of Richard Bodorff as chair and Rhea Feikin as vice chair. The two directors step up to take over after several years of stellar leadership provided by John Wolf and Kathryn Lindquist, respectively, in the top two volunteer offices of the 41-year nonprofit organization.

Richard “Dick” Bodorff joined the MPT Foundation board of directors in 2019. He is also the vice chair of MPT’s governing body, the Maryland Public Broadcasting Commission. His nearly 50-year career as a communications attorney in private practice began in the General Counsel’s Office at the Federal Communications Commission following a clerkship with then Commissioner Dick Wiley. His current position with Wiley Rein LLP includes numerous public and commercial media clients.

Mr. Bodorff’s current nonprofit involvement includes the Chesapeake Bay Maritime Museum, the YMCA of the Chesapeake, and the Broadcasters Foundation of America, where he has spent more than a decade on the organization’s board of directors. He has supported numerous organizations throughout his career, including stints as vice chairman of the board of America’s Public Television Stations, general counsel and secretary for the Broadcasters Foundation of America, and chairman of the boards of the Commonwealth Public Broadcasting Corporation and Academy Art Museum. He lives in Easton with his wife, Ellen.

Rhea Feikin joined the MPT Foundation board of directors in 2020, shortly after her retirement from the statewide public TV network. Many MPT viewers know Ms. Feikin from her many decades of appearances as a pledge host for the network’s onair fundraising campaigns, and for her role as host of MPT productions including MPT on Location (1991-1996), ArtWorks This Week (2002-2013), Impressions with Rhea Feikin (2007-2014), Artworks (2013-2020), and Chesapeake Collectibles (2011-2020). Her first job at MPT was on the 1970s series Consumer Survival Kit. She came out of retirement in recent months to work on an upcoming MPT documentary featuring Jewish delicatessens in Maryland, a film that has its debut in 2023.

Ms. Feikin has served on the boards of the Baltimore School for the Arts, the Gordon Center for Performing Arts, the United Cerebral Palsy Foundation, and the Baltimore County Adult Education Committee. She served as chair of MPT’s first-ever comprehensive fundraising campaign, which concluded in 2020, and was a founder of Baltimore’s Center Stage in 1963. She resides in Baltimore.

John Wolf and Kathryn Lindquist remain on the MPT Foundation board of directors after 14 combined years of leadership and 22 combined years of volunteer service for the 501(C)3 organization. Mr. Wolf, an attorney in the Baltimore office of Baker Donelson, served as chair of the foundation for eight years during two separate terms. He joined the board in 2011 and continues to serve in what is currently his 11th year of volunteer service. Mrs. Lindquist, a principal at Park Lake Holdings, also joined the board in 2011. She served as vice chair for a six-year term beginning in 2016 and remains a member of the board in what is now her 11th year of service in that role.

Maryland Public Television (MPT) is a statewide, public-supported TV network and Public Broadcasting Service member offering entertaining, educational, and inspiring content delivered by traditional broadcasting and streaming on TVs, computers, and mobile devices. A state agency, it operates under the auspices of the Maryland Public Broadcasting Commission. MPT creates local, regional, and national content and is a frequent winner of regional Emmy® awards. MPT’s commitment to educators, parents, caregivers, and learners of all ages is delivered through instructional events and Thinkport.org. MPT’s year-round community engagement activities connect viewers with resources on a wide range of topics. For more information visit mpt.org.

The MPT Foundation, Inc. is the 501(c)(3) fundraising affiliate of Maryland Public Television, a state-licensed network and member of the Public Broadcasting Service (PBS). Incorporated in 1981 as the Maryland Public Broadcasting Foundation, Inc., the foundation today comprises members drawn from Maryland business, civic, and cultural communities to assist MPT in securing private contributions and foundation grants. In 1999, the foundation established a charitable endowment whose investment income benefits MPT.