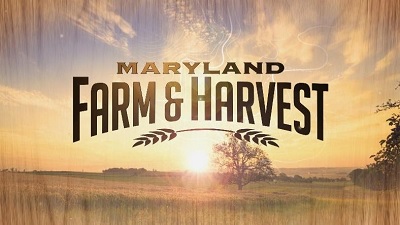 Maryland Farm & Harvest airs on Tuesdays at 7 p.m. on MPT-HD and online at mpt.org/livestream. Encore broadcasts are available on MPT-HD Thursdays at 11 p.m. and Sundays at 6 a.m. Each episode also airs on MPT2/Create® on Fridays at 7:30 p.m.  Episodes are also available to watch on demand using MPT’s online video player and the PBS Video App.

The popular weekly series takes viewers on a journey across the Free State, telling engaging and enlightening stories about the farms, people, and technology required to sustain and grow agriculture in Maryland, the state’s number one commercial industry. During its 10th season, the series revisits some favorite farms and farmers from past episodes.

Joanne Clendining, who has earned two Emmy® awards from the National Capital Chesapeake Bay Chapter of the National Academy of Television Arts & Sciences for her work on Maryland Farm & Harvest, serves as host. She is joined by Al Spoler, who handles duties for each episode’s The Local Buy segment.

The Local Buy: Oksana’s Produce and Fermenting (Kent County).  It took Russian immigrant Oksana Bocharova many years to purchase the farm that turned a dream into reality. Oksana explains how she obtained a loan from the USDA as part of a program that helps immigrants, women, and new farmers start their own farms. The result is Oksana’s Produce Farm in Chestertown. Segment Host Al Spoler visits the farm near the Chester River where Oksana grows a wide variety of vegetables.  Oksana, who learned about farming from her father in Russia, also applies family traditions to pickling and fermenting her vegetables. Al helps harvest vegetables and Oksana explains the fermenting process. Then it’s on to pickling dill, leeks, and cabbage to make foods such as kimchi and Russian kraut. Al tries Oksana’s kraut and tells viewers ways to use it will be available at mpt.org/farm.

More than 15 million viewers have watched Maryland Farm & Harvest on MPT since its fall 2013 debut. The series has traveled to more than 430 farms, fisheries, and other agriculture-related locations during its first nine seasons, covering every Maryland county, as well as Baltimore City, and Washington, D.C.

During the next episode of Maryland Farm & Harvest, series host Joanne Clendining introduces viewers to a farm family who has been part of the Baltimore Farmers’ Market during its entire 45-year history.  Then, the show travels to Washington County to learn about the work of an expert who helps vineyards across Maryland make the most of their grape harvests. Plus, in The Local Buy segment Al Spoler meets a Russian immigrant and Kent County farmer who uses her fresh produce and herbs to prepare and sell pickled and fermented products such as kimchi and Russian kraut.

Maryland Public Television (MPT) is a statewide, public-supported TV network and Public Broadcasting Service member offering entertaining, educational, and inspiring content delivered by traditional broadcasting and streaming on TVs, computers, and mobile devices. A state agency, it operates under the auspices of the Maryland Public Broadcasting Commission. MPT creates and distributes local, regional, and national content and is a frequent winner of regional Emmy® awards.  MPT’s commitment to educators, parents, caregivers, and learners of all ages is delivered through instructional events and Thinkport.org. MPT’s year-round community engagement activities connect viewers with resources on a wide range of topics.  For more information visit mpt.org.