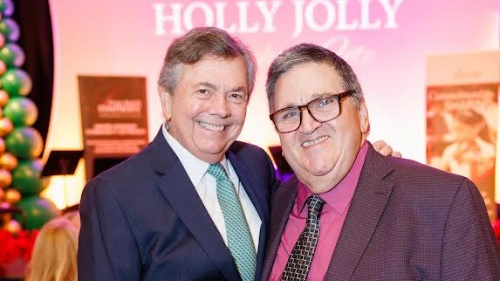 Paul Destito, Assistant Band Director at Bak Middle School of the Arts in West Palm Beach, has been named the Palm Beach Symphony Instrumental Music Teacher of the Year.

Destitocounts members of the Symphony among the many students he has taught during his long and distinguished career. A Hobe Sound resident, he is a nine-time teacher of the year in Martin and Palm Beach counties and was named the sole winner of the Educational Foundation of Palm Beach County Dwyer Award for Excellence in Middle School Teaching in 2019.He has been chosen to conduct the Florida Middle School All-State Band at the Florida Music Educators Conference in January of 2024.

“Paul is widely sought after as an adjudicator, clinicianand guest conductor,” said Palm Beach Symphony Music Director Gerard Schwarz as he bestowed the award. “He has served as Assistant Band Director at South Fork High School, Band Director at Indiantown Middle School, Adjunct Professor of Music at Indian River State College and Band Director at Jupiter Middle School. It is an honor for me to present this award to him.”

Maestro Schwarz will visit Destito’s classroom as part of the prizes that come with the award, which alsoincludescoaching sessions by Palm Beach Symphony musicians, an invitation for a student music ensemble of Destito’s choice to perform at a Symphony event, and complimentary tickets for his classes to attend a Symphony concert this season. Destito also received a “Basket of Indulgences” filled with gift items and gift certificates.

The award presentation was made at theSixth Annual Holly Jolly Symphony Fête which supports the Symphony’s educationcommunity outreach and music education programs.

“You are what answered prayers look like to band directors like me,” Destito told the Symphony supporters in attendance. “For 20 years Palm Beach Symphony has sent their musicians into middle and elementary schools all over Palm Beach County to help our children. I couldn’t get a kid to play a bassoon. We had the Symphony’s woodwind quintet come in and four kids fell in love with that instrument. For 20 years, I’ve had bassoon players. The contributions you make to this orchestra go deep, deep, deep into our county and into the hearts of young people.”

The Instrumental Music Teacher of the Year Award is open to K-12 educators in public, private and charter schoolsin Palm Beach County and recognizes educators who teach and inspire students while also taking an active role in the community.

Palm Beach Symphony is South Florida’s premier orchestra known for its diverse repertoire and commitment to community. Founded in 1974, this 501(c)(3) nonprofit arts organization adheres to a mission of engaging, educating, and entertaining the greater community of the Palm Beaches through live performances of inspiring orchestral music. The orchestra is celebrated for delivering spirited performances by first-rate musicians and distinguished guest artists. Recognized by The Cultural Council for Palm Beach County with a 2020 Muse Award for Outstanding Community Engagement, Palm Beach Symphony continues to expand its education and community outreach programs with children’s concerts, student coaching sessions and master classes, instrument donations and free public concerts that have reached more than 65,000 students in recent years.  For more information, visit www.palmbeachsymphony.org.