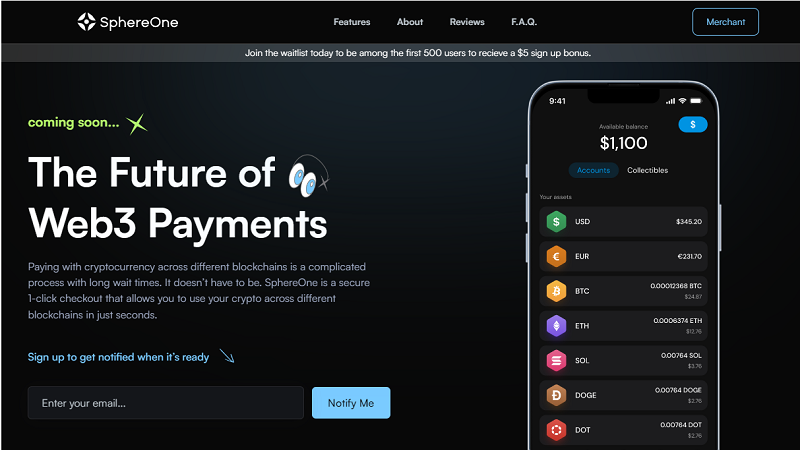 SphereOne, a crypto payment platform that allows users to make purchases with any cryptocurrency, across any blockchain, today announced that they’ve closed a $2.5M seed round led by Distributed Global and participation by Newark Venture Partners, Zero Knowledge, as well as angel investors Leore Avidar of Alt.xyz and Lob.com and Eric Feldman of Bolt.com. The SphereOne platform prioritizes immediacy in transactions and features include a 1-click checkout, as well as the ability to simplify swapping fiat to crypto and vice versa.

“The user experience for consumers using crypto for payments is fragmented,” said Christopher Ries, COO and Co-founder of SphereOne. “Web3 consumers continue to give us feedback that moving liquidity across different chains to purchase things is complicated, time-consuming, and risky.”

According to Chainalysis an estimated “$2 billion in cryptocurrency has been stolen across 13 separate cross-chain bridge hacks, the majority of which was stolen this year.” Consumer confidence has been shaken and an increased security presence is critical for the next wave of users to feel good about using crypto payment rails.

SphereOne’s founding team has unique credentials in both security infrastructure and early-stage products to create a platform able to protect the consumers of tomorrow. Ries previously served as an initial product hire at Cylance Inc. (acquired for $1.4B) and later managed a portfolio of security infrastructure products at Oracle. Ries also worked in the public sector securing critical infrastructure for the Pentagon. McNutt has a background in product development and is an accomplished 3X founder with multiple exits. As the Founder and CEO of ApplyAll (an AI-startup), he scaled the business to over 100K MAUs and has successfully managed robust, global engineering teams.

“We’re so focused on creating the best user experience for first-time crypto users that I often joke with Chris that we’re building crypto for grandmas since we want anybody to participate in Web3,” said Ryan McNutt, CEO and Co-founder of SphereOne.

SphereOne helps merchants increase conversion rates and retain customers by making it easy for customers to make purchases with any cryptocurrency. Early adopters of the SphereOne crypto payment platform are from a variety of verticals (including traditional e-commerce), but the Web3 gaming segment has been the most compelling.

“If you’re a Web3 game publisher, it’s important to focus on onboarding experience for Web2 players since that’s where much of the opportunity is. SphereOne is an integral part of our payment stack because it creates an abstraction layer for users not familiar with crypto infrastructure and allows us to incorporate different blockchains without building out direct support,” explained Jacob Sloan, CEO of MetaOps (a popular first-person-shooter game on Fractal.is).

Perhaps the largest opportunity for SphereOne is in developing countries where crypto payments have thrived in the absence of traditional finance offerings.

McNutt concluded, “We’re really excited about launching our mobile application internationally for peer-to-peer transactions, especially in developing countries. There will be some great applicability for our crypto payment technology with users in those regions given our low fee structure.”

SphereOne is the future of Web3 payments, providing a secure 1-click checkout that allows you to use crypto across different blockchains in just seconds. For more information visit sphereone.xyz or follow us on twitter at @SphereOne