With his wife Dawn, daughter Mia and son James by his side, Wes Moore takes the oath of office with his hand on the historic Bible owned used by Frederick Douglass during the public swearing-in ceremony for governor on Wednesday. Screenshot from the Washington Post broadcast of the event. https://www.youtube.com/watch?v=xWA5hQASMtQ

MOORE INAUGURATION FOCUSES ON HISTORY AND THE FUTURE: In a star-studded inauguration ceremony Wednesday, newly sworn-in Maryland Gov. Wes Moore captivated the crowd with the same energy and vision that launched his political ascension last year. Emphasizing themes of unity and forward progress, Moore promised to lift people out of poverty, become a leader in clean energy technology and create a path of service for the state’s youth. Michael Charles of Capital News Service/MarylandReporter.

PITTMAN AN ANIMATED MC: Arundel County Executive Steuart Pittman was an animated master of ceremonies for the entirety of the outdoor event. Here are his opening remarks. The Capital Gazette. 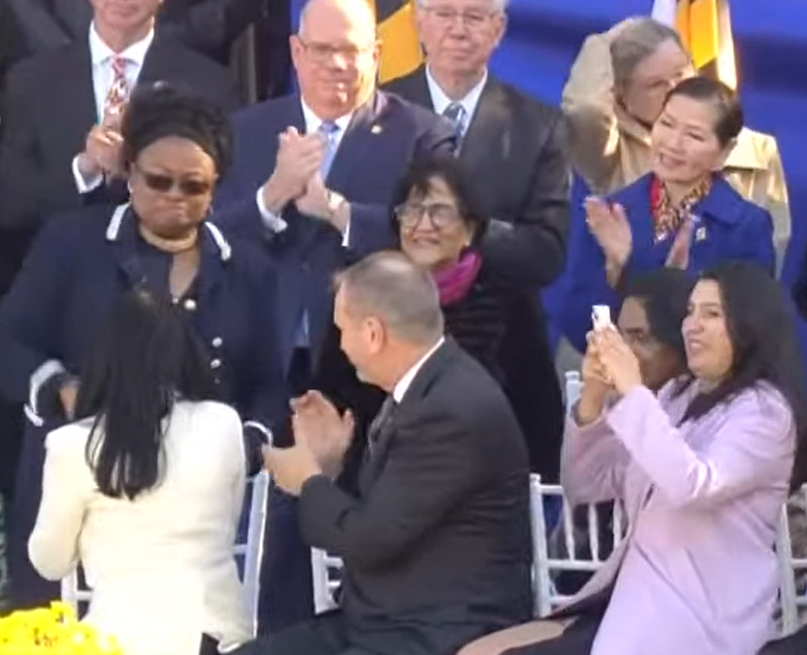 Joy Moore, Wes Moore’s mother, in sunglasses, and Aruna Miller’s mother, Hema Katragadda, in purple scarf, are given a standing ovation from the crowd. Screenshot from Washington Post broadcast. Click the image to go to the video.

DIVERSITY ON FULL DISPLAY: With the historic inauguration Wednesday of the state’s first Black governor and Asian lieutenant governor, a diverse group of Marylanders arrived at the State House inspired by Wes Moore’s message of a more equitable state. Greg Morton of Capital News Service/MarylandReporter. 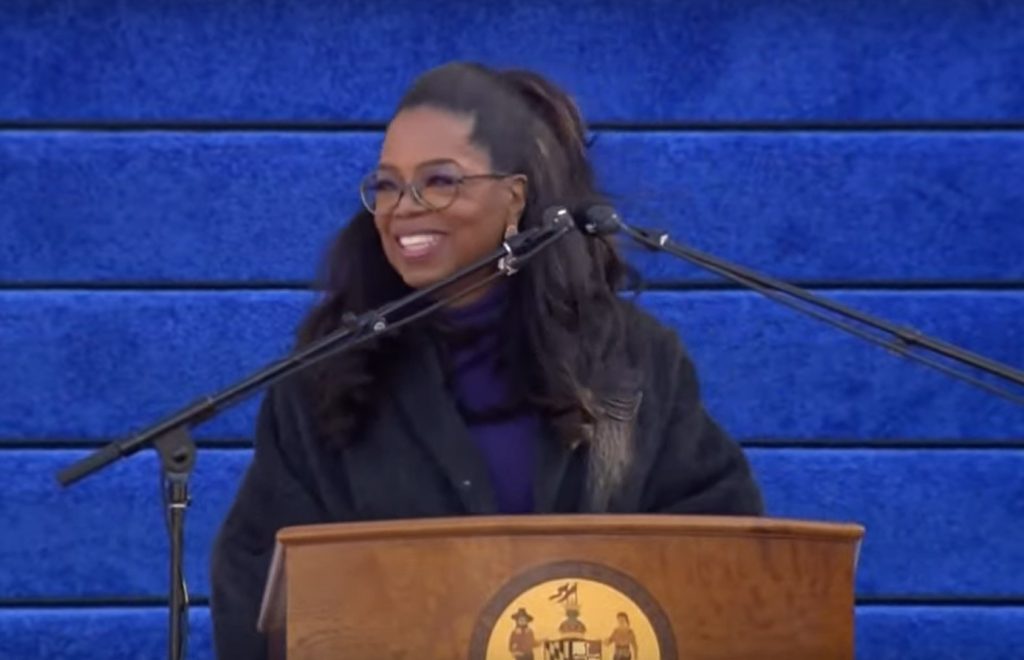 Media mogul Oprah Winfrey speaks of her love of Baltimore and her hope in Wes Moore’s governorship. Screenshot from Washington Post broadcast. Click the image to go to the video.

CELEBRITIES OF ALL TYPES IN ATTENDANCE, BUT ESPECIALLY OPRAH: In what universe does Del. Wayne Hartman (R-Lower Shore) get a better seat than Eric Holder or Cal Ripken? Hard as it might be to imagine, that was the circumstance on Lawyers’ Mall in Annapolis on Wednesday at the swearing-in ceremony for Gov. Wes Moore (D) and Lt. Gov. Aruna Miller (D). The event was a political and star-studded event, with Oprah Winfrey grabbing much of the attention – but still not as much as Moore and Miller. Josh Kurtz/Maryland Matters.

MOORE, MILLER CHILDREN TAKE CENTER STAGE: Maryland’s new first and second children didn’t just look on in pride as their respective parents, Gov. Wes Moore and Lt. Gov. Aruna Miller, made history Wednesday afternoon — they participated in it. Mia and James Moore, ages 11 and 9, and Miller’s adult children, Meena, Chloe and Sasha, all had a hand in helping their parents celebrate their historic inauguration, beginning with watching a wreath-laying ceremony at City Dock and ending with star turns on the stage outside the State House. Hannah Gaskill/The Baltimore Sun. 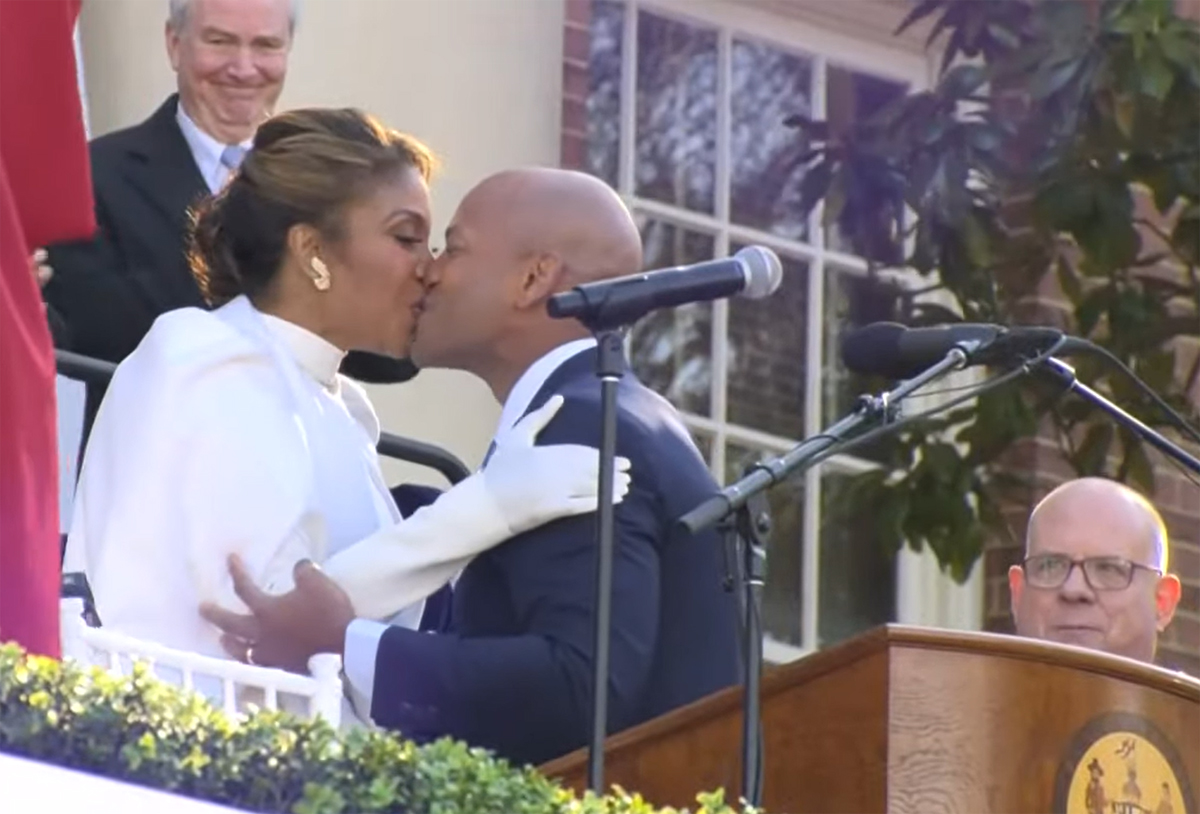 Wes and Dawn Moore share a kiss shortly after he is sworn in during outdoor inauguration events on Wednesday as U.S. Sen. Chris Van Hollen, left, and former Gov. Larry Hogan look on. Screenshot from Washington Post broadcast. Click the image to go to the video.

DAY ENDS WITH CELEBRATIONS: Richard and Vanessa Deutschmann were eager to come to the Baltimore Convention Center Wednesday night to relish the historic day for Gov. Wes Moore, who they believe cares deeply for Charm City. “Baltimore is an amazing city that has been historically left out of politics, I’m excited to see that change,” Richard Deutschmann said. John-John Williams and Imani Spence/The Baltimore Banner.

TODAY, THE WORK BEGINS: Gov. Wes Moore (D) and his supporters partied well into the night Wednesday at their jam-packed, raucous inaugural ball in the Baltimore Convention Center. But Moore pledged that he’d be on the job early Thursday morning, promising to spend his first full day as Maryland’s chief executive signing executive orders and meeting with law enforcement officials from across the state to discuss innovative ways to fight crime. Josh Kurtz/Maryland Matters.

ISO: HYPOALLERGENIC RESCUE PUP TO BECOME 1st CANINE: Gov. Wes Moore and his wife Dawn Flythe Moore have promised their children that a pet dog will join them at the governor’s mansion in Annapolis. But they’re still looking for the perfect furry addition to their family – a hypoallergenic rescue dog. Pamela Wood/The Baltimore Banner.

THE DAY PICTURES: Photos from morning to night on Inauguration Day.

HARRIS TO HEAD HOUSE APPROPRIATIONS SUBCOMMITTEE: Rep. Andy Harris, Maryland’s only Republican in Congress, will chair an appropriations subcommittee in the new, GOP-controlled House. Harris, 65, a seven-term representative in the 1st Congressional District of Harford County and the Eastern Shore, was named to head the House Appropriations panel overseeing funding for the Department of Agriculture, Food and Drug Administration, and other agencies. Jeff Barker/The Baltimore Sun.