With the historic inauguration Wednesday of the state’s first Black governor and Asian lieutenant governor, a diverse group of Marylanders arrived at the State House inspired by Wes Moore’s message of a more equitable state.

Moore, freshly inaugurated, took office saying, “This journey has never been about ‘making history.’ It is about marching forward. Today is not an indictment of the past; it’s a celebration of our future. And today is our opportunity to begin a future so bright, it is blinding.”

He extolled the virtues of his state, saying, “Maryland is home to spectacular natural beauty, dynamic industries, and people as talented as they are determined.” But he cautioned that “for too long, we have left too many people behind.”

It’s that promise that caused throngs to flock to his inaugural, many of them Black Americans, who see in Moore a new beginning.

“Once again, when he’d say ‘leave nobody behind’, I think that encompasses so much that he’s gonna make sure to tackle to make sure that you count. I count. We all count in the state of Maryland,” said Jerome Stephens, a Black man from Baltimore County.

Before the crowd began streaming in, soldier rows of about 2,600 white chairs in front of the Maryland State Capitol building portended the excitement around Moore’s inauguration.

Even hours before the event was set to begin, the air around the capitol was already pregnant with the anticipation of Democratic lawmakers excited to have an ally in the governor’s office after eight years of Republican leadership, law enforcement and city officials scrambling to make sure everything was set up, and Marylanders from around the state, some with their children or their students in tow, ready to see themselves reflected in the highest office of state government.

“My district is about 75 percent Black. So the kids in my district get to look up and see Wes Moore as governor, a Black man who lives in Baltimore City,” said Del. Caylin Young, D-Baltimore City. 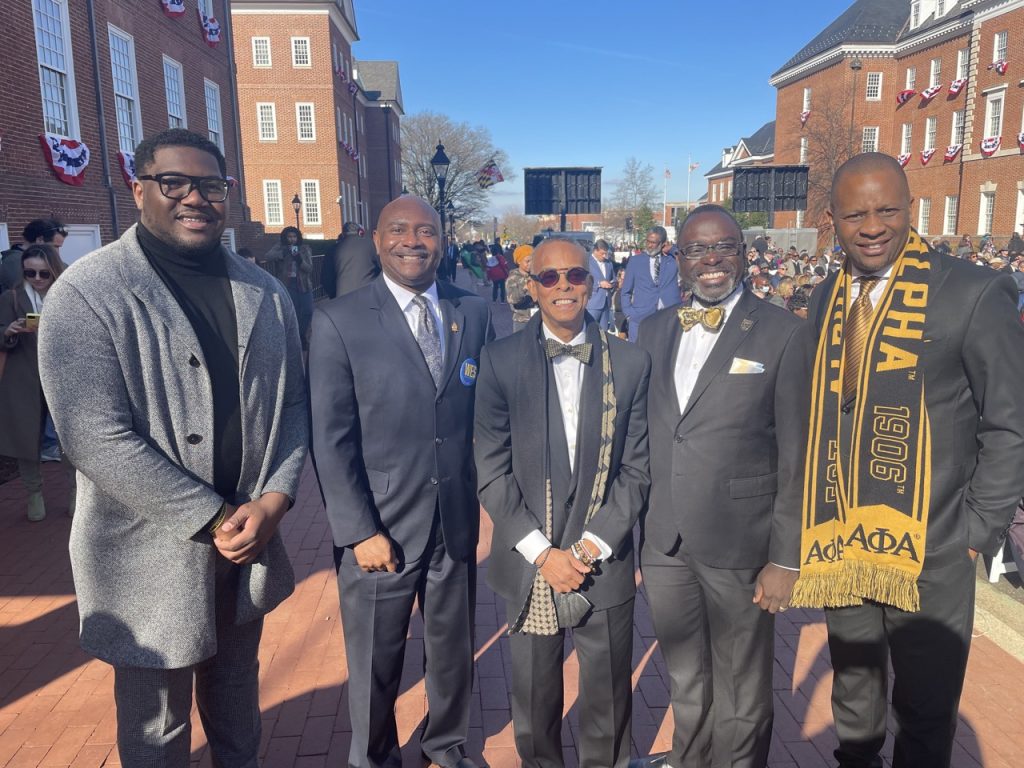 Lawmakers seemed keenly aware of the gravity of the moment as they gathered in a joint session in a tightly packed House chamber at 9:30 a.m. to certify election results to cheers and loud applause. Some seemed ready, even before the inauguration began, to get to work alongside their new governor.

“Now’s the time, now that we have the leadership in place, now we have to move the dial forward and make significant change to ensure opportunities for each and every resident,” said Sen. Ron Watson, D-Prince George’s County.

As legislators began to make their way outside after the joint session, the lines of white chairs were  beginning to give way to smiles, anticipatory conversation, the sounds of a diverse array of music from hula to bachata, and the bright colors of historically Black “Divine Nine” fraternities and sororities, whose members arrived in numbers to support the governor-elect, a member of Alpha Phi Alpha fraternity. 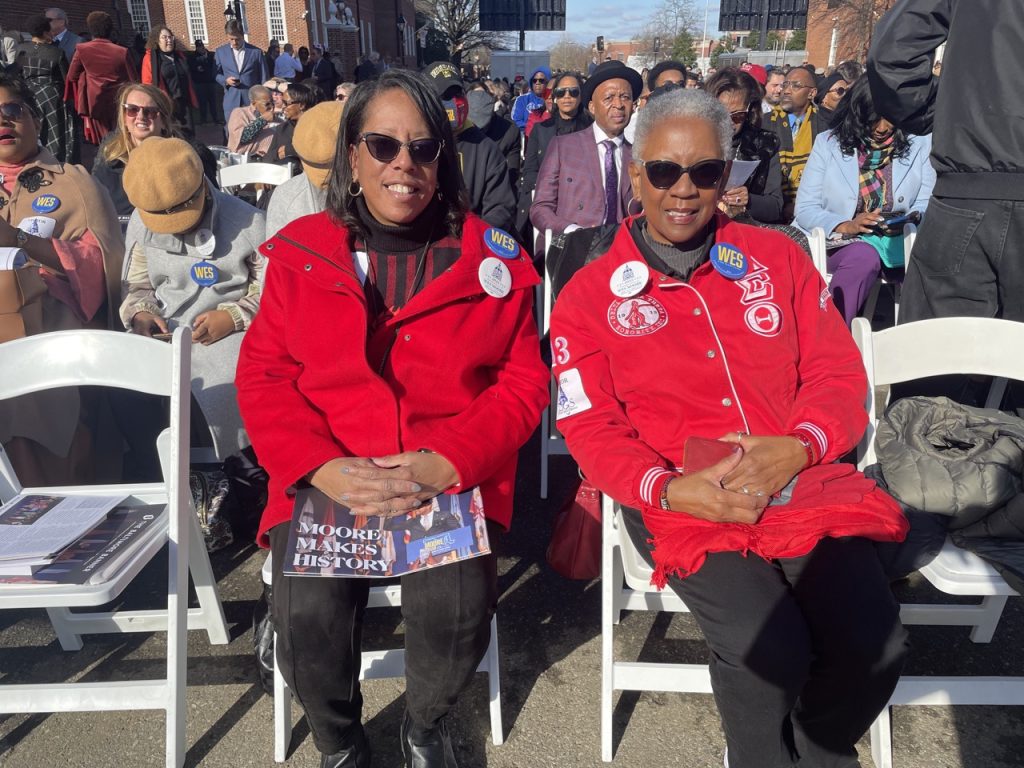 Swain Riley, sporting a shiny black jacket shot with gold lettering saying “Manly Deeds” on the back, came to the inauguration saying his support for Moore was “threefold:” He and Moore are both members of the Alpha Phi Alpha, retired Army veterans (Riley was an Army master sergeant) and Black men. Black and gold and “Manly Deeds” are the colors and credo of the Black fraternity.

Riley said he just moved to Maryland after his retirement and he attended Moore’s swearing in because, “I want great things for the place I moved to.” After he attended Bowie State, he said, “Maryland is the place for me.”

Others arrived feeling hopeful about Wes Moore’s policy agenda. Deborah Wilder, a former public administrator from Prince George’s County and member of Delta Sigma Theta Sorority, who arrived clad in her all-red Delta jacket, was hopeful about Moore’s promise to fill many of the vacant jobs in state government.

“I don’t think people who work for government agencies, especially local and state, get enough praise,” she said. Adding “if it weren’t for those who work in governmental areas, a lot of what goes on in the state wouldn’t happen.”

Dr. Ralph Johnson, a former mentor of Moore’s at Johns Hopkins University, arrived alongside a multi-generational coalition of Alphas to support Moore. Johnson, who sported a “WES” button, recalled just how little had changed about Maryland’s new governor over the course of their 20-plus-year relationship.

“What you see here is not fake. That is Wes Moore. And I can say that was Wes Moore when he was 20 years old when I knew him at Hopkins,” said Johnson.

Johnson had an air of pride about him as he looked back on his words to Moore years ago:

“I told him when he was a student at Hopkins, you’re going to be something great one day, I don’t know what it is, but you’re gonna be something really great.”