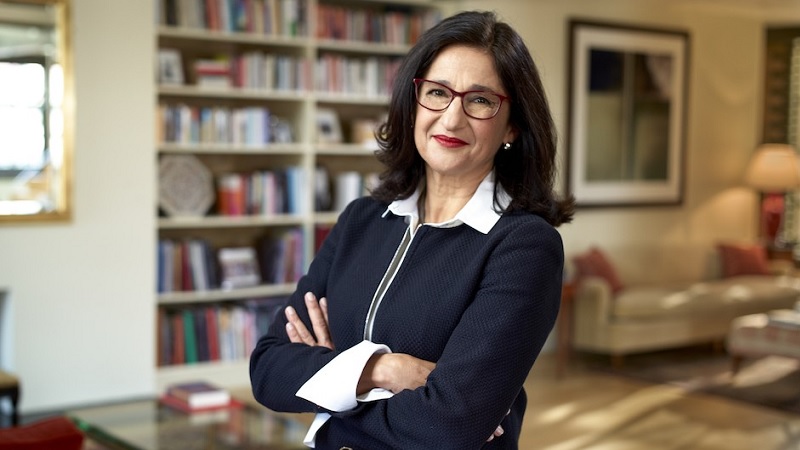 Board of Trustees elects leading economist and current president of the London School of Economics and Political Science to succeed Lee C. Bollinger.

Nemat “Minouche” Shafik, a leading economist whose career has focused on public policy and academia, will become the 20th president of Columbia University on July 1, 2023. Her election concludes a wide-ranging and intensive search launched after Lee C. Bollinger announced that he would step down as Columbia’s president at the end of the 2022-2023 academic year.

In a letter to the community, Jonathan Lavine, chair of the Columbia Board of Trustees, called Shafik “the perfect candidate: a brilliant and able global leader, a community builder, and a preeminent economist who understands the academy and the world beyond it.”

“What set Minouche apart as a candidate,” Lavine said, “is her unshakable confidence in the vital role institutions of higher education can and must play in solving the world’s most complex problems. Like all of us in the Columbia community, she believes that in order to bring about meaningful change, we have a collective obligation to combine our distinctive intellectual capacities with groups and organizations beyond the academy.”

Lisa Carnoy, who led the Presidential Search Committee and whose term as co-chair of the Board of Trustees ended in the fall, described an extensive process for the 15 members of the Presidential Search Committee. The group spent hundreds of hours consulting with “advisory committees and academic leaders inside and outside of Columbia, talking with potential candidates, hearing from friends of the University and in many days of formal interviews and deliberations,” Carnoy wrote in a thank-you letter to search participants.

“By working together across the University and with our many stakeholders, we conducted a search not on behalf of any single group, but one that was in the overall interests of Columbia and with the very best result,” said Carnoy. “Minouche Shafik is the right leader for Columbia’s next chapter.”

President Lee C. Bollinger said of his successor, “I feel like, if I had looked all over the world for the best person to next lead Columbia, I would have chosen Minouche Shafik. Her expertise, her experiences—both personal and professional—and her general outlook on academic and public life make her an inspired appointment. I offer her my warmest congratulations and very best wishes as she takes on what I believe to be the best job in the world.”

Shafik has led the London School of Economics and Political Science (LSE) since 2017. There, she has overseen vast improvements to the student experience, recruited talented academic leaders, and managed significant expansion and infrastructure projects. She is a tireless proponent of diversity and inclusion and a creative and thoughtful leader committed to cultivating and promoting service to the public good. Shafik has edited, co-authored, or authored numerous articles and books, including, most recently, What We Owe Each Other: A New Social Contract (2021, Princeton University Press), in which she calls for a better social contract to underpin our economic system and challenges institutions and individuals to rethink how we can better support each other to thrive.

The selection of Shafik marks the first time since Columbia’s founding that the University will be led by a woman. Shafik also served as the first female leader of LSE and previously was the first female permanent secretary of the U.K. Department for International Development.

Nobel laureate and Columbia economics professor Joseph Stiglitz has known Shafik since the 1990s, when they were colleagues at the World Bank. He described her as a great economist, a great researcher, and a great listener. In each job she’s held, “she has combined enormous intellect with interpersonal skills that were very impressive, navigating complex bureaucracies.” These bureaucracies, Stiglitz said, consist of very intelligent people and require “dealing with them with respect, listening to them, and crafting solutions to the problems that they confront in a creative way.”

She has done this while keeping up “her commitment to intellectual inquiry.” Stiglitz continued, “at LSE, all the people I know there—and I have a lot of friends who teach there—all of them have enormous admiration for her.”

Shafik began her career at the World Bank, becoming the bank’s youngest-ever vice president at the age of 36. She later served as Permanent Secretary of the U.K.’s Department for International Development, where she led an overhaul in British foreign aid; as Deputy Managing Director of the International Monetary Fund during the European debt crisis; and as Deputy Governor of the Bank of England, where she sat on all monetary, financial, and prudential policy committees and was responsible for a balance sheet of more than £500 billion (equivalent to approximately $605 billion).

In a conversation with Columbia News earlier this month, Shafik talked about higher education, research, diversity, student engagement, and what she is looking forward to once she joins Columbia this summer.

For Shafik, teaching and research are synergistic. She believes that teaching at a top-tier university like Columbia “is informed by and imbued with research,” and that students should be thought of as “future scholars who themselves will have to develop the skills of creating knowledge and advancing their own arguments.” The modern university, Shafik said, should foster curiosity-driven research and “protect the space for that creativity, to move the frontiers of human knowledge.”

What’s more, according to Shafik, universities should nurture an environment where people don’t always agree, but “learn from each other” and “derive mutual understanding from that learning.” This for her is “an essential part of fostering an open society.”

Shafik spoke passionately about how the work of the university should promote social justice and human thriving in a pluralistic society. She said that universities have a particular role in “giving young people opportunities to encounter difference and to learn to engage with difference.” In the complex world we live in, Shafik said that “being able to engage with people who have a very different perspective and point of view is an essential way to build a cohesive society.” This engagement, she continued, allows people “to live together and thrive together and make decisions together.”

She spoke about how diverse leadership can bring different perspectives and outcomes. “Everywhere I’ve worked, I’ve made a huge effort to make sure that I had teams around me who had different points of view, different backgrounds, and different life experiences.” She described her leadership style as “inclusive and open.” The best thing a leader can do, she said, is recruit “smart, talented people” and create “an environment in which they can thrive.”

Shafik believes that diversity can be encouraged by opening “the door for others,” which results in “better workplaces, better decisions, and more impact.” To this end, she sees universities playing an important role “in social mobility and providing access and opportunity to everyone. There is much debate about this issue in terms of admissions, in terms of the costs of education, in terms of the impact and benefits of higher education. And we need to rise to that challenge because providing opportunities for everyone is a core part of what we do.”

Shafik is committed to Columbia’s Core Curriculum, which she sees as providing the “foundation for citizenship” and cultivating in people the “capacity to think for themselves.” She is looking forward to engaging with students, whom she said are “important partners in thinking about how to improve the student experience, what their education should encompass, as well as participating in the research and the intellectual life of the University.”

On a personal note, Shafik is excited to move to New York City. “When I met my husband, he was living in New York City. Three of our children are New Yorkers. So, my family feels we are coming back to the center of the universe. I have a lot of curiosity and eagerness to discover the city.” Columbia, she continued, “is a great University in a great, global city. And that combination is quite distinctive, and I think creates an openness to the world and a sense of dynamism and creativity that is unique.”

Over the next few days, before heading back to LSE to conclude her service, Shafik will be visiting all four Columbia campuses, talking with faculty, students, staff, and local community leaders. “I do a lot of management by walking around…meeting people, chatting, learning about what they’re doing and I look forward to doing lots of that at Columbia.”