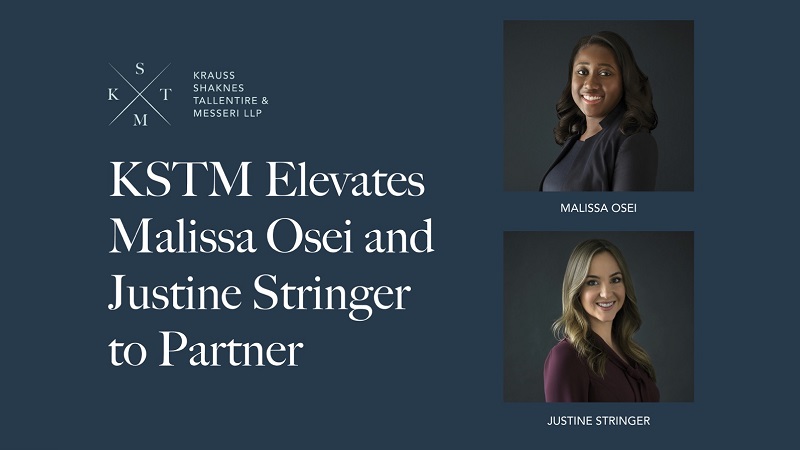 “We are fortunate to have worked with Malissa and Justine since the early stages of their careers, and we couldn’t be prouder of the lawyers they are today,” said KSTM founding partner Caroline Krauss. “The depth of their matrimonial and family law expertise, as well as their fierce dedication to their clients, make them both tremendous assets to our firm. We are thrilled to welcome them into the partnership.”

Malissa concentrates her practice on commercial litigation and matrimonial matters, and has extensive experience litigating complex divorce disputes, negotiating pre-nuptial agreements and separation agreements, and litigating child custody and child support matters in New York’s Family, Supreme, and Appellate Courts. Malissa is a skilled trial attorney who was recently named to the National Black Lawyers’ Top 40 Under 40, selected for the American Bar Association’s prestigious On the Rise – Top 40 Young Lawyers award, recognized by New York Super Lawyers as a Rising Star in Family Law, and named a Woman Worth Watching by Profiles in Diversity Journal. Before joining KSTM, she was an associate at Blank Rome, in one of the nation’s largest matrimonial practices.

Justine represents high-net-worth individuals in complex and often high-conflict matrimonial and family law matters. She has extensive appellate court experience, practicing in the Appellate Divisions and the Court of Appeals. In addition, she has a particular focus on international child custody and international child abduction disputes, and has established herself as a go-to practitioner in the small community of lawyers who specialize in proceedings under the Hague Convention on the Civil Aspects of International Child Abduction. Through this work, she has been given the opportunity to file amicus curiae briefs in cases arising under the Hague Convention to the Supreme Court of the United States of America and to the United States Court of Appeals for the Second Circuit.

She has been consistently recognized by New York Super Lawyers as a Rising Star in Family Law and was selected as a Woman Worth Watching by Profiles in Diversity Journal. Justine is a member of the Women’s Bar Association’s Family Law Committee and the New York State Bar Association. Following her graduation from New York Law School, she worked as a volunteer law clerk for the Honorable New York County Supreme Court Justice Matthew F. Cooper.