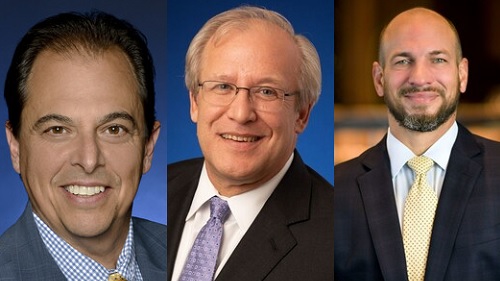 Cordish Gaming Group, the gaming division of The Cordish Companies, today announced key executive appointments as the company prepares for the expansion of the Live! Casino brand.

Joe Billhimer Prior to his new role, Mr. Billhimer was responsible for leading the company’s expansion into the Commonwealth of Pennsylvania with the development of two new Live! Casino properties in Pittsburgh and Philadelphia. He will now oversee operations at all Live! Casino properties in the Cordish Gaming portfolio, including Pennsylvania and Maryland, while identifying and developing new growth opportunities in other gaming jurisdictions.

Mr. Billhimer has more than 35 years of industry experience. In addition to his time with Cordish Gaming, he has served as Chief Operating Officer of Eldorado Resorts, Inc. in Reno, NV; and President of MTR Gaming, based in Wexford, PA., prior to its merger with Eldorado Resorts. Mr. Billhimer also served as Chief Executive Officer of Premier Entertainment, where he was named Casino Journal’s “Executive of the Year” for his efforts in developing, and redeveloping, the Hard Rock Hotel and Casino Biloxi after its destruction by Hurricane Katrina. Additionally, he has held leadership positions at Foundation Gaming Group, Caesars Entertainment’s Grand Casino Resort in Gulfport, MS., and Casino Magic Bay in St. Louis, MS.

Craig Clark As Executive Vice President & General Manager of Live! Casino & Hotel Philadelphia, located in the heart of the Philadelphia Stadium District, Craig Clark will assume oversight of all day-to-day management and operations of the property. He is also committed to maintaining and further elevating Live! Philadelphia’s profile in the community through expanded partnerships and support of all business, tourism and non-profit organizations.

Mr. Clark brings over 30 years of diversified experience within the gaming industry to his new role. He joined the Live! team in 2020 as Vice President of Finance for the opening of Live! Casino Pittsburgh, and then served as COO of Seneca Gaming Corporation.

In his new role, Mr. Eller will assume oversight of the day-to-day management and operations of the property, which is entering its second decade as Maryland’s preferred gaming destination and one of the largest commercial casinos in the country. He will step into the role focused on driving growth, while consistently enhancing customer service and encouraging Team Member engagement.

With nearly 20 years in the gaming and hospitality industries, Mr. Eller is an industry veteran with extensive experience leading organizations through start-up, expansion, and complex market transactions. He brings a wealth of meaningful experience to his new position, including guiding organizations through unique challenges encountered in turnarounds, enterprise expansion, asset development, restructuring, and mergers and acquisitions.

Mr. Eller most recently served as President of GH Holdings in Austin, Texas. Prior to that position, he was the President, CEO, and Director at Empire Resorts, Inc. in New York. Mr. Eller has also held leadership positions at prestigious gaming destinations throughout his career, including Genting Americas/Resort World in New York, Pearl Rivers Resorts in Jackson, Mississippi, PCI Gaming in Mobile, Alabama, and Caesars Entertainment in Memphis, Tennessee. Mr. Eller has also served as Chairman of New York Gaming Commission and served on the board of various trade and community organizations.

“As the company prepares to experience exponential growth in the coming years, these appointments position us to maximize results at our existing operations, while pursuing development and management opportunities in other gaming jurisdictions,” said Rob Norton, President, Cordish Gaming Group. “Joe, Craig and Ryan are well suited to maintain the same level of excellence and customer service our guests have come to expect at Live! Casinos and Hotels.”

About Live! Casinos & Hotels Live! Casinos & Hotels set a new standard in best-in-class customer experiences with highly-acclaimed resort, casino and entertainment destinations throughout the Mid-Atlantic region. Live! delivers a renowned blend of world-class accommodations and amenities, award-winning dining, casino gaming action, and headline entertainment, all in an exciting, spontaneous atmosphere that has become synonymous with the Live! brand nationwide. Live! offers a premier gaming experience, including a strategic partnership with FanDuel Group, to bring unique promotions and sports engagement opportunities to all Live! properties. With a commitment to impeccable customer service and treating guests like part of the family, Live! properties attract millions of visitors per year seeking unique experiences with gaming, dining and entertainment, all in one location. The portfolio includes Live! Casino & Hotel Maryland – located in the Washington, DC/Baltimore corridor; Live! Casino & Hotel Philadelphia – located in the heart of the South Philadelphia Stadium District; Live! Casino Pittsburgh – located in Westmoreland County, PA; and PlayLive.com – the company’s branded Internet gambling business in the Commonwealth of Pennsylvania. Live! Casinos & Hotels are owned and operated by Cordish Gaming Group, a division of the world-renowned developers The Cordish Companies. For more information, visit LiveCasinoHotel.com.