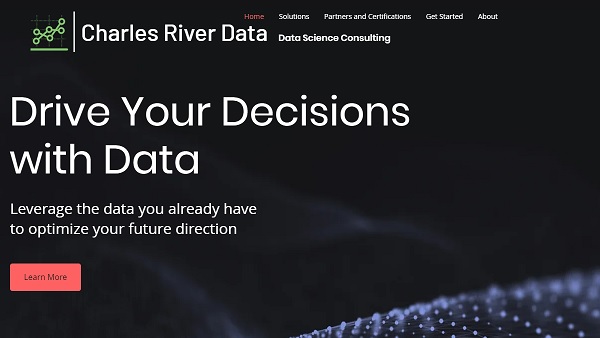 “I’ve known founder and CEO Michael Dezube since well before his time leading data science and machine learning teams at Google. Following his career and investing in Charles River Data is core to my investment philosophy, to back exceptional player/coach leaders,” said Trevor Burgess.

“After the Great Resignation, many tenured data science professionals gave up on traditional hierarchies in favor of a more impactful career. Charles River Data arose out of this historic moment, and we understand the career priorities of exceptional engineers, allowing us to recruit only extraordinary talent,” said founder and CEO, Michael Dezube.

We are a team of builders and tech enthusiasts, using our passion and expertise for data to create exponential results for our clients.

Charles River Data was founded by Michael Dezube, a former Google senior software engineer/data scientist. Mike holds a bachelors in operations research and information engineering, and a master’s in systems engineering, both from Cornell University.

Trevor is the President & CEO of Neptune Flood, an AI-driven firm that is the largest private flood insurance company in the United States. He is a prolific financial technology inventor and supports early-stage founder-led companies that have the potential to transform industries. He is the former American Banker of the Year and an EY Entrepreneur of the Year award winner. In 2016 Trevor became the first openly gay CEO of a NYSE listed bank, was a former Morgan Stanley Managing Director, and started his career at Monitor Company as a strategy consultant. Trevor is a graduate of Dartmouth College.