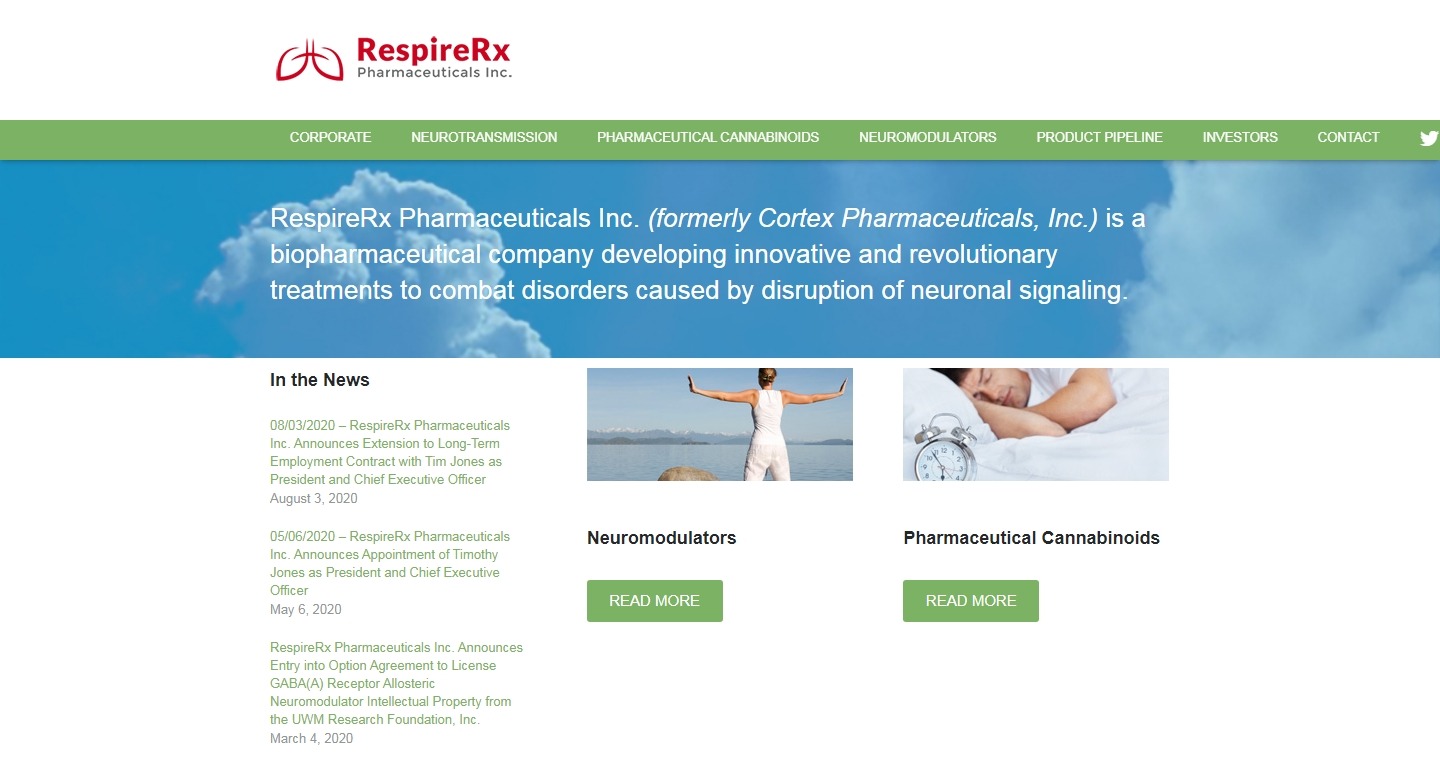 ​Glen Rock, N.J., Aug. 04, 2020 (GLOBE NEWSWIRE) — RespireRx Pharmaceuticals Inc. (OTCQB: RSPI), has historically been and remains a leader in the research and development of ampakines for a variety of central nervous system (CNS) disorders and cannabinoids for the treatment of sleep-related breathing disorders. On March 2, 2020, the Company and the UWM Research Foundation, Inc., an affiliate of the University of Wisconsin-Milwaukee entered into an option agreement to license the identified intellectual property pursuant to license terms substantially in the Form of Patent License Agreement that is attached to the Option Agreement as Appendix I. For a detailed description, see our Form 8-K filing with the Securities and Exchange Commission on March 4, 2020 at www.sec.gov.

RespireRx is pleased to announce that the Company has exercised the Option Agreement and, as of August 1, 2020, entered into a patent license agreement (“License Agreement”) for GABAA receptor neuromodulator intellectual property from UWMRF. The exercise of the option was pursuant to the successful closing of a $2 million funding commitment described in a Form 8-K filed on August 3, 2020. The Company had met all of its obligations in the Option Agreement, including having a contractual commitment of at least $1 million of aggregate financing to the Company, UWMRF’s acceptance of the Company’s proposed development plan, satisfactory responses to reasonable UWMRF requests for information and the receipt of appropriate approvals by each party. For a more complete description of the Option Agreement, refer to the complete Form 8-K filing on March 4, 2020.

The License Agreement, described in Form 8-K filed on August 4, 2020, grants the Company rights to practice the licensed subject matter, including United States Patents 9,006,233, 9,597,342, and 10,259,815 and Canadian patent application serial No. 2979701, and all other patents and patent applications in lineage with these priority applications, including divisional, continuation, continuation-in-part, and any corresponding patent applications. In return, RespireRx is required to provide annual development plan updates, to remit to UWMRF, in installment payments, past patent costs, annual license maintenance fees beginning on the second anniversary, clinical milestone payments upon the dosing of the first patient in a Phase II clinical trial, upon the dosing of the first patient in a Phase III clinical trial, and upon the approval of a new drug applications (“NDA”) with the Food and Drug Administration (“FDA”). Royalties on net sales would also be due to UWMRF. In addition, in the event of sub-licenses to third parties, the Company will owe a portion of sub-license revenue to UWMRF. In lieu of an upfront payment upon exercise of the option and at the effectiveness of the License Agreement and consistent with the Company’s view that the relationship with the University of Wisconsin is as much a partnership as a license, UWMRF has been granted an appreciation right associated with the neuromodulator program if sold or assigned equal to 4.9 percent of the consideration received.

The compounds that are the subject of the License Agreement with UWMRF act to enhance the actions of GABA (GABAkines), the major inhibitory transmitter in the brain, at certain sub-type specific GABAA receptors. Certain of these compounds have shown impressive activity in a broad range of animal models of refractory/drug resistant epilepsy and other convulsant disorders. Epilepsy is a chronic and highly prevalent neurological disorder that affects millions of people world-wide. While many anticonvulsant drugs have been approved to decrease seizure probability, seizures are not well controlled and, in as many as 60-70% of patients, existing drugs are not efficacious at some point in the disease progression. We believe new drugs are clearly needed. In addition, these GABAkines have shown positive activity in animal models of migraine, trigeminal pain, anxiety and other areas of interest. Because of their GABAA receptor sub-type specificity, the compounds have a greatly reduced liability to produce sedation, motor incoordination, memory impairments and tolerance, side effects commonly associated with non-specific GABAA PAMs, such as benzodiazepines.

As described in our previous press release of February 12, 2020, the Company intends to re-structure the corporation by creating two separate business units. In that press release, we described our plans for creating a new, stand-alone pharmaceutical cannabinoid company (“Newco”) with a focus on developing a new formulation of dronabinol for the treatment of obstructive sleep apnea and to exploit opportunities that may result from our new patent filing. Building upon our ampakine platform as a foundation, we also are planning the establishment of a second business unit, which we currently call Project Endeavor, that will focus on developing novel classes of drugs that fall under the broad category of “neuromodulators”. The term neuromodulators refers to drugs that do not act directly at the receptor sites for brain neurotransmitters, but instead act at accessory sites that enhance (Positive Allosteric Modulators – “PAMs”) or reduce (Negative Allosteric Modulators – “NAMs”) the actions of neurotransmitters at their primary receptor sites. Ampakines act as PAMs at the AMPA receptors for glutamate, the major excitatory neurotransmitter in the brain. Through an extensive series of translational studies from the cellular level up to human Phase 2 clinical trials, selected ampakines have demonstrated target site engagement and positive results in patients with Attention Deficit Hyperactivity Disorder.

“With the consolidation of the ampakine and GABAkine modulator platforms, Project Endeavor is rapidly becoming one of the major CNS programs in the field of neuromodulation,” said Dr. Arnold Lippa, Executive Chairman of the Board and Chief Scientific Officer. “I am particularly excited by the article published by our scientific collaborators describing results from an elegant series of translational experiments in which brain tissue was excised from patients with severe drug resistant epilepsy (Witkin et al. Brain Res., 2019). The application of a GABAkine to this tissue at concentrations we believe to be achievable with oral administration produced dramatic reductions in the epileptogenic activity of this tissue, confirming the potential of our GABAkines to treat epilepsy. We eagerly look forward to working with this highly experienced scientific team led by Dr. James Cook at the University of Wisconsin-Milwaukee and Dr. Jeffrey Witkin of the Indiana University School of Medicine.”

Dr. Jessica Silvaggi, Director of Technology Commercialization at UWMRF added, “We are extremely enthusiastic about the collaboration of our researchers with our new partners at RespireRx which is an excellent marriage of scientific and start-up expertise. We look forward to the next stages of pre-clinical testing of the lead GABAkine compound which shows great promise for epilepsy patients.”

RespireRx Pharmaceuticals Inc. is a leader in the development of medicines for respiratory disorders and CNS indications, with a focus on obstructive sleep apnea, attention deficit hyperactivity disorder (ADHD), spinal cord injury and other neurological conditions. The Company owns and has exclusive rights to patents and patent applications for certain families of chemical compounds that claim the chemical structures, formulations and their uses in the treatment of a variety of disorders, as well as claims for novel uses of known drugs.