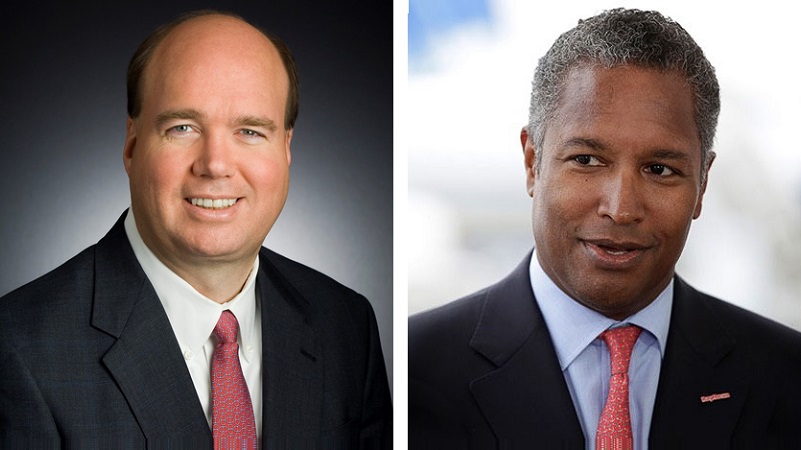 IRVING, Texas–(BUSINESS WIRE)–Exxon Mobil Corporation said today that Lawrence “Larry” W. Kellner and John D. Harris II have joined its board of directors. Kellner is the former chairman and chief executive officer of Continental Airlines and current chairman of the board for the Boeing Company. Harris is the former chief executive officer of Raytheon International Inc., a wholly owned subsidiary of Raytheon Company, a global engineering and technology company focused on aviation, space and defense.

“During Larry’s tenure as chairman and CEO of Continental Airlines, he led a major turnaround following the industry’s downturn after 9/11 and helped make Continental a leader among major carriers. His experience in the airline industry comes with a focus on safety and will provide useful customer insights into many areas of strategic interest, including the role ExxonMobil can play in providing lower-emission fuel options for commercial transportation,” said Darren Woods, chairman and chief executive officer for Exxon Mobil Corporation. “Over his 35-year career with Raytheon, John served in a variety of complex, cross-functional roles. He led significant business transformation to unlock value and new markets on an international scale and brings a rare understanding of the role of technology and government policy.”

“We welcome both Larry and John to the ExxonMobil board, as the company executes its strategy to grow shareholder value by leading a thoughtful transition to a lower-emissions future, while providing the reliable energy and products the world needs,” said Joseph Hooley, lead independent director for Exxon Mobil Corporation. “These new directors deepen the diverse expertise of the board with both bringing significant experience as executives of large, complex, capital-intensive global companies that successfully navigated significant industry transitions.”

Kellner is president of Emerald Creek Group, LLC, a private equity firm based in Austin, Texas. From December 2004 to December 2009, he was the chairman and chief executive officer of Continental Airlines, Inc., which had operations around the world with 41,000 employees. He joined Continental in 1995 as chief financial officer and was named chief operating officer in 2003.

Kellner has a distinguished reputation as a board leader who provides meaningful oversight in challenging and changing markets. He currently serves as chair of the board for the Boeing Company. He formerly served as lead director at Marriott International, Inc., as chairman at Sabre Corporation, and as director at Chubb Limited, Belden & Blake Corporation, and ExpressJet Holdings, Inc.

In 2013, he was named chief executive officer for Raytheon International – a role he held until his retirement in 2020. During his 35-year career with Raytheon, Harris gained experience leading the company’s worldwide sales, government relations, operations, and developing and executing its business strategy. He also is credited with restructuring and reforming the business development function from an organization focused on product offerings, to one skilled at business creation and solutions.

With the election of Harris and Kellner, the board has added experienced, proven leaders who have led value-creation efforts through industry transitions. The ExxonMobil board has increased to 13 directors, 12 of whom are independent. In recent years the company has added board expertise in climate science, the energy industry, asset and risk management, and capital allocation.

The corporation’s primary businesses – Upstream, Product Solutions and Low Carbon Solutions – provide products that enable modern life, including energy, chemicals, lubricants, and lower-emissions technologies. ExxonMobil holds an industry-leading portfolio of resources, and is one of the largest integrated fuels, lubricants and chemical companies in the world. To learn more, visit exxonmobil.com and the Energy Factor.