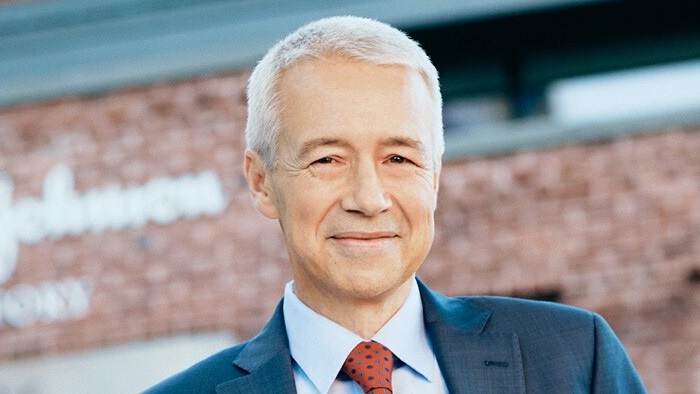 NEW BRUNSWICK, N.J.–(BUSINESS WIRE)–Johnson & Johnson (NYSE: JNJ) today announced that its Board of Directors has elected Chief Executive Officer, Mr. Joaquin Duato, to assume the additional position of Chairman, effective in January 2023. Mr. Duato succeeds Mr. Alex Gorsky, who will step down from his role as Executive Chairman following a brief transitional period.

Mr. Duato has served as Johnson & Johnson’s CEO and a member of the Board of Directors since January 3, 2022. Prior to that time, he held senior leadership positions over his 30-plus year career with the Company across multiple business sectors, geographics and functions.

“On behalf of the Board of Directors, I would like to thank Alex for his unwavering commitment to Johnson & Johnson. Over the last three decades, Alex’s influence has truly shaped the global healthcare landscape and improved billions of lives,” said Anne Mulcahy, Lead Independent Director. “Joaquin’s appointment to the additional role of Chairman reflects his tremendous 30-year track record at Johnson & Johnson, as well as the Board’s thoughtful and engaged approach to succession planning. During Joaquin’s career with the Company, the Board has witnessed firsthand his ability to effectively lead, collaborate, and create value for all our stakeholders. We have the utmost confidence that he will continue to be an excellent steward of the business and look forward to working closely with him in this next chapter.”

Mr. Duato said, “Guided by our Credo, I will continue to work closely with the other Directors to build on Johnson & Johnson’s success. I also want to thank Alex for his countless contributions to our Company. He has inspired an entire generation of leaders with his passion for improving human health, built the best team in the industry and laid a strong foundation for the future of both Johnson & Johnson and Kenvue, the planned new Consumer Health company.”

“The opportunity to lead Johnson & Johnson through such a pivotal time in the Company’s history has been the great privilege of my life,” said Alex Gorsky. “I would like to express my deep appreciation to every employee, past and present, for their steadfast commitment to bringing our Credo to life every day and to improving the well-being of those who rely on us. It has been an honor to work alongside each of you, and I could not think of a better leader than Joaquin to lead the Board as it helps guide the Company to even greater achievements.”

About Joaquin Duato
Joaquin Duato is the Chief Executive Officer of Johnson & Johnson and serves on its Board of Directors. He leads a global workforce of 135,000 employees in developing and delivering transformational and innovative healthcare solutions in Pharmaceuticals, MedTech, and Consumer Health. Previously, Joaquin served as the Vice Chairman of the Executive Committee, where he provided strategic direction for the Pharmaceutical and Consumer Health sectors and oversaw both Information Technology and the Global Supply Chain.

A believer in the power of technology to accelerate progress in healthcare, Joaquin is leading Johnson & Johnson to harness data science and intelligent automation to solve the world’s toughest health challenges. He is committed to building an inclusive workforce that reflects the patients Johnson & Johnson serves.

He earned an MBA from ESADE in Barcelona, Spain, and a Master of International Management from Thunderbird School of Global Management in Phoenix, Arizona.

About Alex Gorsky
Alex Gorsky is Chairman of the Board and Chief Executive Officer of Johnson & Johnson, one of just seven leaders who have served in the dual role since the company was listed on the New York Stock Exchange in 1944.

Alex began his Johnson & Johnson career as a sales representative with Janssen Pharmaceutica in 1988. Over the next three decades, he advanced through positions of increasing responsibility in sales, marketing, and management, culminating in being named CEO and Chairman in 2012. Under Alex’s leadership, Johnson & Johnson continues to be one of the world’s exceptional corporations and is currently the number one pharmaceutical company on Fortune magazine’s list of the “World’s Most Admired Companies.”

A longtime advocate of diversity and inclusion and supporter of veterans’ issues, Alex currently sits on the Board of Directors of Apple, IBM, JPMorgan Chase, NewYork-Presbyterian Hospital, and the Travis Manion Foundation, and serves on the Wharton School of the University of Pennsylvania Board of Advisors.

After completing his undergraduate education at the U.S. Military Academy at West Point, NY, Alex served six years in the Army. He earned his MBA from the Wharton School of the University of Pennsylvania in 1996.

About Johnson & Johnson
At Johnson & Johnson, we believe good health is the foundation of vibrant lives, thriving communities and forward progress. That’s why for more than 135 years, we have aimed to keep people well at every age and every stage of life. Today, as the world’s largest diversified healthcare products company, we are committed to using our reach and size for good. We strive to improve access and affordability, create healthier communities, and put a healthy mind, body and environment within reach of everyone, everywhere. We are blending our heart, science and ingenuity to profoundly change the trajectory of health for humanity.