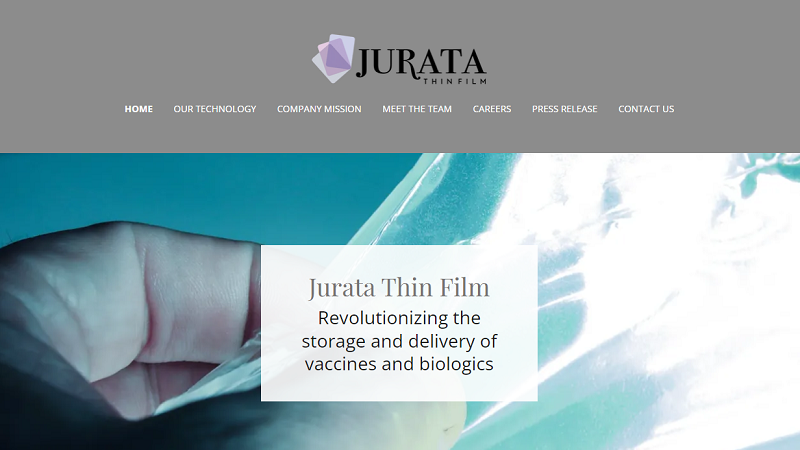 Jurata Thin Film, a startup focused on stabilizing vaccines at ambient temperature has raised initial investment funds totaling $4.87 million to develop the technology. Jurata’s revolutionary process preserves the therapeutic activity of biological pharmaceutics by immobilizing them into a solid film matrix, similar to the way amber can preserve ancient plant and insect specimens trapped within. The technology allows vaccines and other life-saving medications to be stored at room temperature for up to three years. This is in stark contrast to conventional vaccine production, which often require freezing and storage at very cold temperatures to maintain potency.

Jurata’s process takes place at room temperature and requires only a few hours to complete. Moreover, the technology circumvents the need for lyophilization, which is an energy intensive and costly bottleneck in conventional pharmaceutical manufacturing. Once thin films are produced, they can be shipped anywhere in the world without temperature-control measures.

The funds raised in this seed round will support the design and build of a pilot-scale manufacturing line capable of fabricating over 1,000 doses of vaccine- or biologic-loaded thin films per hour. The manufacturing equipment, which is scheduled to be delivered in next spring, will enable Jurata to produce clinical-grade material at relevant scale.  Funds will also be used to support the requisite toxicity studies demonstrating safety of Jurata’s formulation for administration under the tongue (sublingual), inside the cheek (buccal), or through intramuscular injection after rehydration. According to Megan Livingston, Jurata’s Senior Director of Business Development, “these funds will enable us to be ready for clinical studies within the next 18 months”.

This technology was originally developed in the laboratory of Maria Croyle, RPh, PhD, a Professor in the College of Pharmacy at the University of Texas at Austin (UT), to deliver Ebola vaccines to populations in low- and middle-income countries. Dr. Croyle serves as Jurata’s Chief Scientific Officer, overseeing research and development (R&D) efforts to broaden the applicability of Jurata’s technology.

Other investors include Jurata’s co-founders Sheila Mikhail, Jude Samulski, PhD, and Dr. Croyle. Current employees have also contributed to the fund, demonstrating the team’s confidence in the technology’s potential. Additional contributions were made by institutional investors, including Columbus Ventures and Ferocity Capital, as well as UT Seed Investment Fund, a new fund intended to support startups based on technologies developed at the University of Texas at Austin.

“We are grateful for the support of our employees and investors, who champion our thin film technology and are working tirelessly to hit critical milestones needed to get this in the clinic,” said Dr. Croyle. “The ability to manufacture, distribute, store, and deliver life-saving vaccines and biologicals, anywhere in the world, without any temperature-control measures will decrease costs and increase equitable access to these therapeutics.”

In addition to scale up and regulatory testing, raised funds will allow the hire of additional R&D personnel to support client evaluation projects and further expand applicability of the technology. As a Blue Knight™ company, Jurata Thin Film performs its R&D work at JLABS in Houston, a life science incubator based in the Texas Medical Center (TMC), the largest medical center in the world. “Basing our R&D operations in TMC gives us unfettered access to some of the best scientists and clinicians in the world. We will use these funds to expand our footprint in the area, and we are excited to bring on new team members,” said Christopher M. Pavlos, PhD, Jurata’s Director of R&D.

“Current pharmaceutical manufacturing technologies have significant shortcomings that limit the ability to mass-produce cost-effective therapies. Jurata’s thin film technology promises to eliminate these limitations,” said Dr. Pavlos. Ms. Livingston added, “We are working hard to give patients access to our thin film technology. We recognize how much our formulation could decrease pharmaceutical costs and increase access to life-saving treatments.”

About Jurata Thin FilmFounded in 2019, Jurata Thin Film, Inc. is a privately-held biotechnology company working to revolutionize the way vaccines and biologics are manufactured, distributed, stored, and delivered to all who need them around the world. Jurata’s thin films can be stored at room temperature for up to three years while maintaining therapeutic payload potency. Thin films have also been proven to protect pharmaceutic cargo even when exposed to extreme temperatures, as is often the case during shipping and distribution. This technology stands poised to remove the need for lyophilization in pharmaceutical manufacturing and eliminate cold chain logistics in vaccine and biologic transport and storage. Parties interested in learning more about or partnering with Jurata Thin Film should visit www.juratatf.com for additional information.