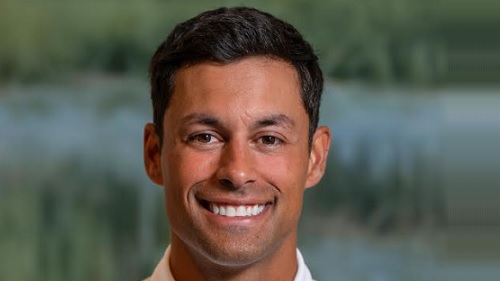 The iconic Orchid Island Golf and Beach Club in Vero Beach welcomes Kainoa Rosa as its new Director of Racquet Sports. Touting over 20 years of racquet experience, Kainoa’s day-to-day responsibilities include overseeing tennis and pickleball programs for the Club, which has been named one of Florida’s Top 7 tennis communities by the Private Communities Registry.

“We interviewed a number of excellent candidates, but immediately Kainoa stood out,” said Rob Tench, General Manager at Orchid Island.  “Kainoa’s energy and experience impressed us and he’s a great fit with the Club and our members. We are excited for the new initiatives he will be bringing to expand and enrich our racquet programs.”

Since early childhood, Kainoa Rosa has always had a passion for racquet sports. Hailing from the scenic islands of Hawaii, Kainoa could be found hitting tennis balls when he was only five years old. After moving to Seattle when he was seven, he received professional coaching from his mother and uncle, who were both well-known tennis players. Later, Kai attended the University of Hawaii on a full tennis scholarship, and after graduation, he decided to follow his passion.

He recalls, “I wanted to make tennis my career pathway, and the coaching adventure started from there.”

After graduating, Kainoa returned to Seattle where he coached at high-performance tennis programs throughout the Pacific Northwest region. Later, he relocated to Tampa, and spent six years at the Apollo Beach Racquet & Fitness Club working his way up to Director of Tennis & Operations.

Desiring to live closer to the beach and work for a top-tier tennis facility, Kainoa moved his young family across the state to Orchid Island in Vero Beach.

“Everything I’ve experienced at Orchid Island has been excellent, especially the welcoming community and staff,” says Kainoa. “The motto here is to live life on purpose, and I look forward to contributing to it.”

When he’s not working, Kainoa enjoys biking, beaching, and traveling with his wife, Bianca, and their baby girl, Healani.

About Orchid Island Golf and Beach Club
Spanning from the Atlantic Ocean to the Indian River, Orchid Island Golf and Beach Club is highly sought-after for its laidback waterfront lifestyle. The Beach Club serves as the heart of the community, with a resort-style pool, world-class fitness center, salon and spa, and multiple dining venues – all overlooking the azure Atlantic Ocean. Residents also enjoy nearly a mile of a secluded beach, an Arnold Palmer-designed championship golf course, and an Audubon Cooperative Sanctuary. Located along Florida’s Treasure Coast, Orchid Island is home to a wide variety of premier riverfront and oceanfront estates, courtyard homes, cottages, and mid-rise condominiums. For real estate inquiries, call (772) 388-3888 or visit OrchidIslandFL.com.