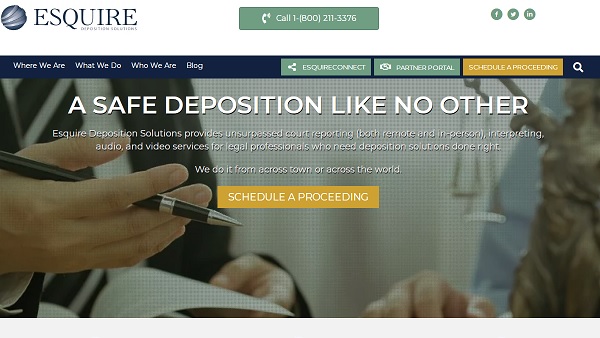 In a case that helps to ensure fair competition for court reporting services nationwide, Esquire Deposition Solutions LLC (Esquire) has settled a lawsuit that accused members of the Louisiana Board of Certified Shorthand Reporters (Board) of price-fixing and violations of the antitrust laws.

Among other stipulations, the settlement:

As a leader among national court reporting firms, Esquire pursued this litigation to uphold the integrity of the industry and to ensure justice for clients, court reporters, and other court reporting agencies.

“We sued the Board under the antitrust laws to ensure that all consumers benefit from healthy competition,” said Avi Stadler, general counsel of Esquire Deposition Solutions. “Clients deposing witnesses in Louisiana benefit from more available service providers at competitive prices. Additionally, court reporters in Louisiana win through greater opportunities to expand their business without fear and can safely partner with a national court reporting agency to serve consumers in the state.”

Terrie Campbell, chief executive officer of Esquire, said, “As a national court reporting agency, we take this seriously. It is critical that all court reporting agencies, boards, and clients follow established rules to ensure that our industry maintains credibility that is critical to recordkeeping integrity for our court system. At its core, this case involved fundamental ethics issues. The entire Esquire organization and I fully recognize and support the important role that national and local court reporting boards play in regulating ethics and ensuring ethical behavior. But when board members who govern the court reporters are themselves not behaving in an ethical way, the very foundation becomes unstable.”