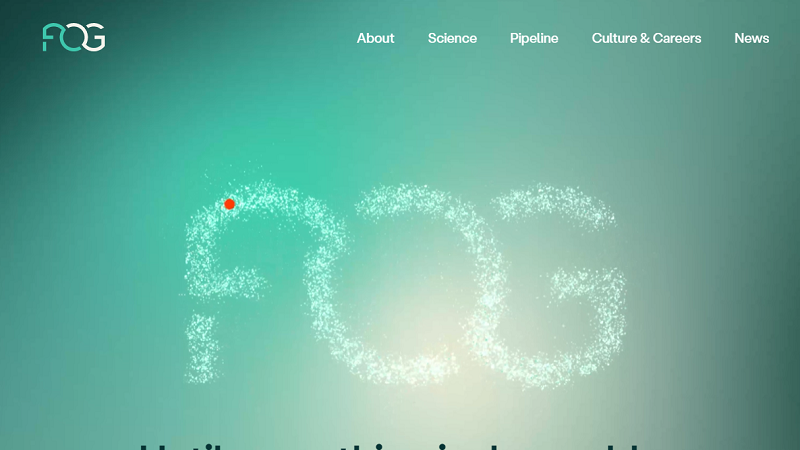 Proceeds from the Series D financing will be used to advance and accelerate FogPharma’s growing pipeline of hyperstabilized α-helical (Helicon™) polypeptide therapeutics, a proprietary new class of drugs designed to overcome the limitations of today’s precision medicines with broad applicability to the vast majority of disease targets and therapeutic areas. FogPharma’s lead Helicon polypeptide development candidate, FOG-001, a first-and-only-in-class direct TCF-blocking β-catenin inhibitor with potential applicability to significant cancer patient populations, is expected to enter clinical development in mid-2023. In addition, FogPharma is advancing other first-in-class programs against important, biologically validated cancer targets that have remained elusive to other approaches including TEAD, NRAS, Pan-KRAS, ERG and Cyclin E1.

“FogPharma continues to make rapid progress on our moonshot mission to achieve universal druggability – a world where no targets are off-limits to medicine,” said Gregory Verdine, Ph.D., founder, chairman and chief executive officer of FogPharma. “We believe that Helicon polypeptides, a compelling new therapeutic modality, represent the future of precision medicine. We are thrilled by the support of our investors and will continue to build our platform capabilities, product pipeline which aims to address a significant percentage of cancer patient populations, and our phenomenal team across all levels as we aim to create one of the most impactful new classes of drugs in history.”

“The team at FogPharma is building an unprecedented new therapeutic modality and robust pipeline with the potential to make a meaningful difference in the lives of cancer patients,” said Dr. Klausner. “I am excited to join the board of directors and be part of something special – particularly at this important time as FogPharma continues to impressively scale its science, team, operations and infrastructure, with the goal of advancing its first Helicon polypeptide therapeutic into the clinic.”

Dr. Klausner is currently the founder and chief scientist of Altos Labs and founder and chairman of Lyell Immunopharma. Dr. Klausner was founder and director of Juno Therapeutics and founder and director of GRAIL. He is also the chairman of Sonoma Biotherapeutics and co-founder and chairman of Lifemine Therapeutics. Previously, Dr. Klausner served as senior vice president, chief medical officer and chief opportunity officer of Illumina Corporation and as executive director for global health for the Bill and Melinda Gates Foundation. Dr. Klausner was appointed by Presidents Clinton and Bush as the eleventh director of the U.S. National Cancer Institute (NCI) between 1995 and 2001. Dr. Klausner served as chief of the Cell Biology and Metabolism Branch of the National Institute of Child Health and Human Development as well as a past president of the American Society of Clinical Investigation. He has served in senior advisory roles to the U.S., Norwegian, Qatari and Indian governments.

Existing drug classes are limited in both reach and applicability, with more than 80% of known human protein disease targets considered “undruggable” because they are beyond the reach of both antibodies and small molecules.

FogPharma’s lead Helicon polypeptide development candidate, FOG-001, a first-and-only-in-class direct TCF-blocking β-catenin inhibitor. Dysregulation of the Wnt/β-catenin signaling pathway has been shown to occur in at least 20% of all human cancers. In the U.S. alone, FOG-001 has the potential to become a new treatment option for >1 million patients suffering from a broad range of intractable cancers.

In biochemical and cellular studies, FOG-001 has been shown to potently, precisely and selectively disrupt the interaction of β-catenin with its obligate downstream transcription factor, TCF. Preclinical studies have demonstrated the ability of FOG-001 to cause tumor growth inhibition and regression by disrupting β-catenin-dependent signaling.

FOG-001 is the inaugural member of FogPharma’s TCF-Catenix family of direct-acting β-catenin antagonists and combines key features that distinguish it from previously reported Wnt/β-catenin pathway modulators: FOG-001 acts inside the cell, where it directly binds the key oncogenic driver β-catenin; and FOG-001 blocks TCF-β-catenin engagement at the most downstream node in the canonical Wnt pathway, thus abrogating the signal transmission mechanism by which most, if not all, known Wnt pathway mutations are believed to drive oncogenesis.

FogPharma plans to submit an investigational new drug (IND) application for FOG-001 to the U.S. Food and Drug Administration (FDA) and initiate clinical development by mid-2023.

FogPharma is a biopharmaceutical company pioneering the discovery and development of Helicon™ polypeptides. Through this novel therapeutic modality, FogPharma aims to address the limitations of existing drug classes and achieve universal druggability – a world where no targets are off-limits to new medicines. Spun out of Harvard University by pioneering academic scientist and successful biotech company builder Dr. Gregory Verdine, FogPharma is advancing a broad pipeline of Helicon polypeptide therapeutics against important and biologically validated cancer targets that have remained elusive to other approaches, with the goal of providing new targeted treatment options for significant cancer patient populations. FogPharma is headquartered in Cambridge, Mass., and has raised more than $360 million to date from leading life sciences investors. For more information, please visit www.fogpharma.com.