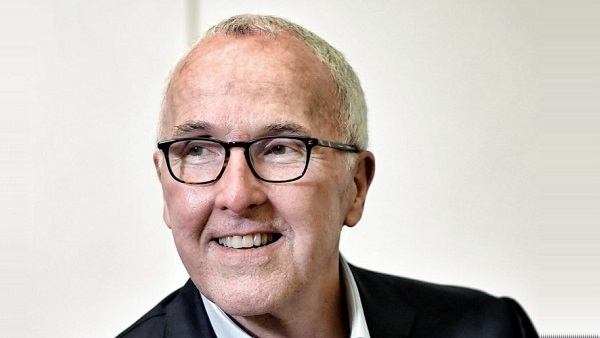 Today, Frank McCourt, chairman and chief executive officer of McCourt Global and founder of international nonprofit Project Liberty, announced that he will transition to the role of executive chairman and welcome a new CEO to McCourt Global next year so he can focus more fully on advancing Project Liberty’s mission to create a better internet for all. McCourt will also serve as Project Liberty’s executive chairman. A civic entrepreneur and fifth-generation builder, McCourt’s milestone transition marks a new chapter for McCourt Global, which operates businesses across the real estate, sports, technology, media, and finance industries, with projects and operations spanning the U.S. and Europe.

“McCourt Global’s rapid growth in recent years, coupled with the urgency of Project Liberty’s mission, make clear that this is an ideal time for change and for building additional capacity,” said McCourt. “I am confident that bringing in two seasoned and highly capable CEOs to oversee the day-to-day operations of McCourt Global and Project Liberty will enable me to shift even more of my time and energy toward Project Liberty. Shéhérazade’s extensive leadership experience, strategic and values-driven approach and talent for inspiring people and unifying teams will help to ensure McCourt Global’s continued success. And Martina’s expertise, creativity and leadership skills will propel Project Liberty forward and bolster the great work that Constance will now oversee at the McCourt Institute.”

McCourt also announced the appointments of Martina Larkin as the first CEO of Project Liberty and Constance Bommelaer de Leusse as the new executive director of Project Liberty’s McCourt Institute. The additions of these dynamic and accomplished leaders mark an important milestone for Project Liberty and its mission to construct a more equitable internet, enable individuals to own and control their personal data and repair social media in ways that strengthen democracy, restore trust and empower people over platforms.

From January 2015 to June 2021, prior to joining the McCourt Institute, Semsar-de Boisséson was founding CEO of POLITICO Europe, which she made fully profitable after four years, building one of the most influential publications ever launched in Europe. At age 24, Semsar-de Boisséson founded her first company, Drive Innovations Insights, which became the largest and most profitable content and conference business in France. She led that company for 28 years before purchasing European Voice, which she later sold to Axel Springer and POLITICO in 2015. She currently serves on the Advisory Board of Politico Media Group.

“I’ve had the pleasure of knowing and working with Frank for many years and have deep respect for what he and McCourt Global’s world-class team have achieved,” said Semsar-de Boisséson. “I’m honored to be the company’s next CEO and look forward to working across its diverse businesses to continue delivering innovative solutions and building for tomorrow.”

Larkin will begin her tenure as Project Liberty’s first CEO in December. In this newly established role, she will oversee the advancement and integration of the organization’s tech, governance, policy and movement tracks by implementing its strategic priorities, leading philanthropic fundraising efforts and expanding Project Liberty’s broad coalition of interdisciplinary partners.

“We are at a precarious time of transformation for technology and the future of global democracies,” said Larkin. “Frank’s vision for Project Liberty offers inspiration, hope and innovation and is showing that technology with the right governance can strengthen democratic institutions and build a digital economy that serves people not platforms. I am excited to join the Project Liberty team and lead this ambitious, optimistic and much-needed initiative.”

Based in London, Larkin is a proven leader with experience across governance, economics and sociopolitical agenda setting, most recently serving as vice president for global issues at System, a global AI company. Prior to that, she spent more than 15 years at the World Economic Forum (WEF), including as regional head for Europe and Eurasia on WEF’s executive committee. Larkin serves on the board of The European Institute for Innovation and Technology and the EU Parliament’s Future of Science and Technology Advisory Board.

“I am delighted to lead the McCourt Institute and excited to support Project Liberty’s mission,” said de Leusse. “We have a finite window of opportunity to positively shape the next generation of the internet, and the McCourt Institute’s vital role is clear. The institute, and the entire Project Liberty team, is committed to harnessing the power of breakthrough technology and research, effective governance principles, and engaged citizens to put us on a better path.”

Based in Paris, de Leusse brings more than two decades of experience in digital policy and capacity building to her new role. Most recently, she served as vice president of institutional relations and empowerment at The Internet Society, which she helped to significantly expand during her 16-year tenure with the organization.

“Our work to build a better internet and ensure that technology supports democracy is an enormous undertaking, and we are grateful for the experience, expertise, entrepreneurial savvy and international perspective both Martina and Constance will bring to this critical initiative,” said McCourt. “They are precisely what we need to keep advancing Project Liberty and expanding our global network of collaborators and supporters.”

These leadership additions build on Project Liberty’s strong momentum in constructing a better internet for all. Last fall, Project Liberty released the groundbreaking decentralized DSNP protocol, which is open-source and accessible to anyone, to enable a more equitable web architecture. Since then, Project Liberty launched the McCourt Institute and distributed its first round of research grants; announced a partnership with Polkadot demonstrating the first implementation of DSNP, as well as collaborations with MeWe and Frances Haugen; and helped to convene more than 3,000 experts and engaged citizens at Unfinished Live 2022 to focus on creating a more equitable web and inclusive digital economy.

About McCourt Global, Project Liberty, and The McCourt InstituteMcCourt Global (MG) is a private family company committed to building a better future for all through its work across the real estate, sports, technology, media, and finance industries, as well as its significant philanthropic activities. Led by civic entrepreneur Frank McCourt, MG is dedicated to extending the McCourt family’s 130-year legacy of merging community and social impact with financial results, an approach that started when the original McCourt Company was launched in Boston in 1893. MG’s multiple businesses include Ligue 1 football club Olympique de Marseille, an international real estate portfolio, a technology development lab focused on creating a healthier digital ecosystem, and a private investment platform with significant permanent capital.

In 2021, MG announced the launch of Project Liberty, a non-profit organization dedicated to transform the way the internet works and to create a new civic architecture for the digital world. In partnership with Sciences Po in Paris and Georgetown University in Washington, D.C., it established Project Liberty’s McCourt Institute to ensure that digital governance is core to the next generation of the web. MG powers Unfinished, an impact network reimagining the future to create a thriving democracy and just economy, that hosts the annual Unfinished Live convening in New York City in September. MG’s philanthropic activities include its foundational support for Georgetown University’s McCourt School of Public Policy and The Shed in New York City.