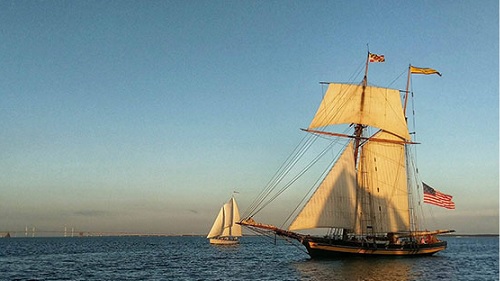 Pride of Baltimore, Inc. (Pride), the nonprofit that manages the tall ship Pride of Baltimore II (Pride II), is pleased to announce that E. Magruder “Mac” Passano, Jr., the president and chief executive officer of One Waverly LLC, has been named the new chair of Pride’s board of directors.

“It is with humility and enthusiasm that I accept the chairmanship of the Pride of Baltimore, Inc. Board of Directors,” said Passano. “The opportunity to follow Jason Williams’ outstanding leadership over the past four years is a special pleasure. He led the board through a period of travel restrictions and economic uncertainty, and stabilized ongoing State funding support. I plan to build on that strong base, focusing on increasing corporate, foundation, and private sector support. I hope to introduce Pride II, a well-recognized and respected international icon, to the leadership in the renewal and revitalization of Baltimore and the Inner Harbor. Let’s all roll up our sleeves and get on board!”

Jayson Williams, president and CEO of MD Strategic Consulting, recently completed his second two-year term as chair and now shifts into the position of immediate past chair. “Serving as the chair of the board of directors has been an honor of a lifetime. We have laid the foundation for Pride II to sail another 30 years,” shared Williams.

Pride is also pleased to announce the addition of Catherine Bishop as development director. “We are thrilled to bring Catherine on as a staff member in this new position for Pride,” said Jeffrey Buchheit, executive director. “This is an exciting time for Pride as we build our staff, as well as our board, while expanding our mission as Maryland’s sailing ambassador by not only encouraging travel to our great state, but by also reaching into communities around the Chesapeake Bay to provide access and opportunities to experience the water.”

Mr. Passano is a Baltimore native who received his undergraduate and graduate degrees from the Johns Hopkins University. Mr. Passano is the president and chief executive officer of One Waverly LLC, consulting in strategic visioning and in the effective uses of corporate philanthropy. His commitment to community service and volunteerism is well known. In 2001, the Association of Fundraising Professionals honored him, his wife, and three daughters as Philanthropists of the Year. In addition to serving on the University of Maryland School of Medicine Board of Visitors, he is chairman of a charitable foundation that bears his name, is former chair of the Combined Health Agencies of Maryland and the Voluntary Council on Equal Opportunity, has served on the board of the Independent College Fund of Maryland for over 20 years, was on the National Advisory Council of the Johns Hopkins University School of Education for more than 35 years, was treasurer of the board of Pride, is a founding member and served on the board of BEEF (Baltimore Economy and Efficiency Foundation) for over 20 years, and has served numerous other organizations. Mr. Passano spent 16 years on the Governor’s Commission on High Blood Pressure and Related Cardiovascular Risk Factors. Mr. Passano’s dedication has earned accolades from such organizations as the American Lung Association, the American Heart Association, the Independent College Fund of Maryland, the Baltimore Jaycees as a Jaycee International (JCI) #20108 Senator, The Arc Baltimore, and the Greater Baltimore Minority Purchasing Council. He has also received a Mayor’s Citation for Public Service, given by former Mayor William Donald Schaefer.

About Pride of Baltimore II

Baltimore Clippers, sleek, fast, and maneuverable vessels, gained fame as privateers during the War of 1812. Their success in capturing British merchant ships provoked the Royal Navy to attack Baltimore in 1814. Francis Scott Key, seeing the American flag still flying over Fort McHenry after the 25-hour British bombardment, was inspired to pen the “Star-Spangled Banner.”

Pride of Baltimore II, like her predecessor, Pride of Baltimore, is a reproduction of one of the most famous of these privateers, Chasseur. For nearly four decades, these modern-day prides of Baltimore have promoted historical maritime education, fostered economic development and tourism, and represented the people of Maryland in ports throughout the world. Since her commissioning in 1988, Pride II has sailed 275,000 nautical miles and visited more than 200 ports in 40 countries. To learn more about Pride of Baltimore II, please visit pride2.org.