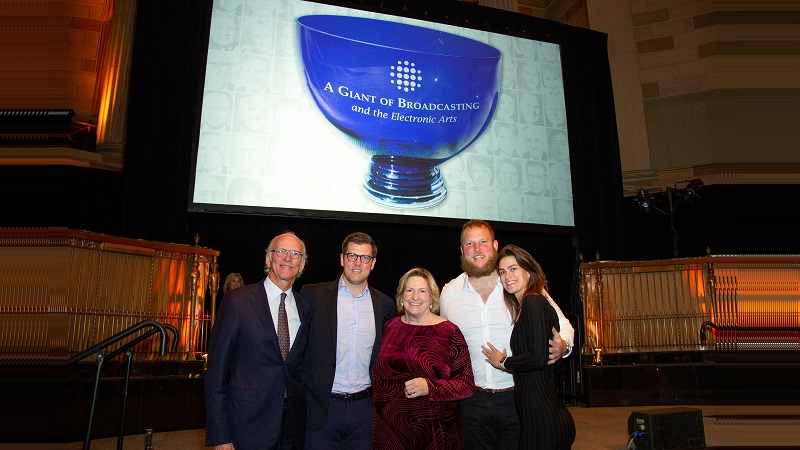 The Library of American Broadcasting Foundation (LABF) by the International Radio & Television Society (IRTS) hosted the Giants of Broadcasting & Electronic Arts event on November 15, 2022 in New York City. Giants of Broadcasting & Electronic Arts celebrates distinguished individuals who have—for the past century—been the creators, innovators, journalists, leaders, performers, and producers that have brought the electronic arts to the prominence they occupy in the United States and the world today, and who have set the stage for the future.

“I am honored to receive this award from the Library of American Broadcasting Foundation,” said Ms. McDermott. “I have learned a great deal about leadership, loyalty, hard work and the importance of one’s values throughout my 25 plus year career. The broadcasting industry is evolving, and I believe there are even greater opportunities ahead to preserve strong, objective local journalism and strengthen our commitment to our communities. I am grateful for the unwavering support and friendship of my former and current colleagues and loving family. I look forward to my ongoing work in the industry that has played such an integral role in my life.”

“We are thrilled to celebrate Deb as one of the most prominent and influential leaders in broadcasting,” said Joyce M. Tudryn, Chair, Giants of Broadcasting & Electronic Arts Luncheon. “Deb is trailblazer who has devoted her career to preserving local journalism and increasing diversity, equity and inclusion in the industry. Her impact on the broadcasting industry has been immense, and we look forward to seeing her further advance the industry for many years to come.”

Ms. McDermott’s remarks from her acceptance speech at the event follow:

I am truly honored to be receiving this award, and I want to thank the Library of American Broadcasting Foundation. As we face our challenges in broadcasting today, I am still incredibly bullish about local broadcasting. Content and distribution have exploded, and that is just what our business is all about. I love this Industry because of its commitment to our communities and local journalism and look forward to the opportunities ahead. According to a recent study by the Pew Foundation, trust in local news organizations is 33% higher than national organizations and almost three times as high as trust in social media. What an opportunity for our local news organizations.

It is so important to remember that to succeed today, we can’t be afraid to fail. Charles Kettering, the noted inventor, said, ‘99% of success is built on failure.’ As I reflected on my career to accept this honor today, this is something that I kept coming back to. I was running through an airport not long ago, and I saw this quote on a card that stopped me in my tracks because it was so reflective of my life and my career. It is a quote of poet Mark Nepo that reads ‘there are no wrong turns, only unexpected paths.’

As I look over my career, it always brings me back to where I came from: a very small town in South Dakota with four brothers and a large extended family, where my midwestern work ethic was instilled in me.

As I started my career in broadcasting at the CBS affiliate in Lincoln, Nebraska, I could not have envisioned the opportunities that would come my way. I also never expected the failures. How fortunate we are to travel down those unexpected paths. They are a part of the journey that leads to some of our important discoveries and ends with some of our greatest successes.

In 2009, during the economic downturn, I was President of Young Broadcasting when we were forced into bankruptcy after losing our NBC affiliation at KRON in San Francisco. That unexpected path introduced me to Soo Kim at Standard General and propelled a long-term working partnership.

In 2010, Soo joined me in bringing Young Broadcasting and its 14 stations out of bankruptcy. Standard General’s involvement helped us right the ship starting with an initial investment of $25 million to improve facilities and expand news coverage. The investment continued through the mergers with Media General and Linn Television, and during that time, we added over 11,500 hours of local news. We continue down those unexpected paths today with the planned acquisition of TEGNA. Soo Kim, Thank you!

This award also goes to all the wonderful people who have walked with me through the highs and lows of this business along the uncharted path and helped to guide the trajectory of my career. I’d like to thank my corporate team at Standard Media: Bob Peterson, Stan Knott, Andy Carington, Dan Ryan, Jim Carr, Fran Gennarelli, Bart Bruckert, David Brenner, Robert Fusco and Clare Gibson. The mentors who have shared their wisdom: Anne Sweeney, Judy Girard, John Conomikes and the late Paul Jensen. And the many business associates: Gail Steiner, Amit Thrakar, David Glazek, John Rouse, Paul Franklin, Gary Gannaway, Leo McCourtney, Mary Beth McAdaragh, Ed Wilson and so many more who have supported me over the years.

I am delighted to have two of my brothers here, Greg and David, to share this event with me. My two sons are also here, Kevin Patrick and Conor. I am so proud of them. More importantly, I am most proud of the outstanding young men they have become. And of course, I give myself full credit for their athletic ability. The best decision I ever made was stalking Kevin McDermott my freshman year in high school. I convinced him to notice me. We dated through high school and college and have shared our lives together for 45 years. Kevin, you are my rock! Thank you. I am truly grateful for this honor.