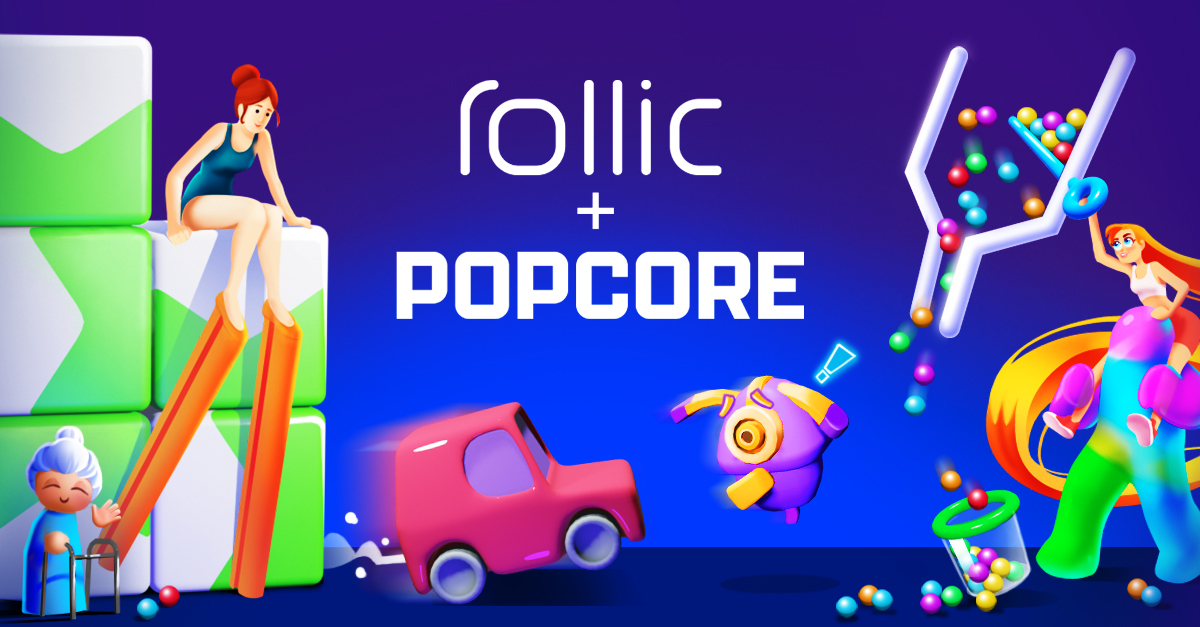 A leader in the puzzle genre, Popcore is home to chart-topping games such as Parking Jam 3D and Pull the Pin!, both of which achieved the status of being among the #1 most downloaded games in the U.S. Apple App Store. The deal further strengthens Zynga’s subsidiary Rollic as a leader among hyper-casual publishers worldwide.

“Popcore’s dedication to rapid experimentation and nimble development matches perfectly with the values and processes we live by at Rollic and I am thrilled to welcome them into our family,” said Burak Vardal, CEO of Rollic. “Combining allows us to build more gaming experiences that emphasize meaningful, lasting engagement. Furthermore, our mutual user base with Popcore will represent a great combination of new players and long-term retaining users.”

“Our teams rigorously test our games, evolving them based on in-depth data analytics to provide entertainment that balances the accessibility of hyper-casual with the lasting engagement of casual gaming,” said Johannes Heinze, Co-Founder of Popcore. “This deal will combine our specific brand of ad-driven, free-to-play mobile titles with Rollic’s global marketing expertise and Zynga’s history of live services to build the next generation of mobile games.”

Founded by brothers Thomas and Johannes Heinze, Popcore develops innovative ad-driven, free-to-play games for audiences worldwide that have been downloaded globally more than 500 million times across iOS and Android. Using unique data testing methods that facilitate experimentation with minimal risk, the team has built games with deep insights into user sentiment and behavior that have both mass appeal and long-term engagement. Headquartered in Berlin, the Popcore team has 150+ members developing, testing, and growing their games.

Based in Istanbul, Rollic recently surpassed 2 billion lifetime downloads worldwide and has had 19 titles reach the #1 or #2 spot in the U.S. Apple App Store. The company develops and publishes hit mobile titles in over 175 countries, redefining the fast-growing hyper-casual sector by adding live services and dozens of in-game events to many of its top-performing titles. This evolution helps to update engagement patterns, extending the lifecycle of Rollic’s hyper-casual titles beyond the traditional window of the genre.

All trademarks and copyrights contained herein are the property of their respective holders.

Zynga is a global leader in interactive entertainment with a mission to connect the world through games and a wholly-owned label of Take-Two Interactive Software, Inc. With a massive global reach in more than 175 countries and regions, the combined diverse portfolio of popular game franchises has been downloaded more than 6 billion times on mobile, including CSR Racing™, Dragon City™, Empires & Puzzles™, FarmVille™, Golf Rival™, Hair Challenge™, Harry Potter: Puzzles & Spells™, High Heels!™, Merge Dragons!™, Merge Magic!™, Monster Legends™, Toon Blast™, Top Eleven™, Toy Blast™, Two Dots™, Words With Friends™, and Zynga Poker™. Zynga is also an industry-leading next-generation platform with the ability to optimize programmatic advertising and yields at scale with Chartboost, a leading mobile advertising and monetization platform. Founded in 2007, Zynga is headquartered in California with locations in North America, Europe, and Asia. For more information, visit www.zynga.com or follow Zynga on Twitter, Instagram, Facebook, or the Zynga blog.

Founded in 2018, Popcore is a Berlin-based game developer, focused on ad driven free-to-play games for iOS and Android. Popcore has been listed in the Top 10 hottest Berlin startups & Top 100 European startups by wired.com and has developed and released chart-topping games including Parking Jam, Pull the Pin, Scavenger Hunt and Tap Away that have been downloaded far more than 500 million times across iOS and Android, including 5+ Top 10 hit games. Popcore is committed to creating genre-defining games that have both mass appeal and long-term engagement while building an ecosystem that turns talent into creators and provides them with the tools and support to excel. For more information visit www.popcore.com or follow Popcore on Instagram or LinkedIn.

Headquartered in New York City, Take-Two Interactive Software, Inc. is a leading developer, publisher, and marketer of interactive entertainment for consumers around the globe. The Company develops and publishes products principally through Rockstar Games, 2K, Private Division, and Zynga. Our products are currently designed for console gaming systems, PC, and Mobile including smartphones and tablets, and are delivered through physical retail, digital download, online platforms, and cloud streaming services. The Company’s common stock is publicly traded on NASDAQ under the symbol TTWO.