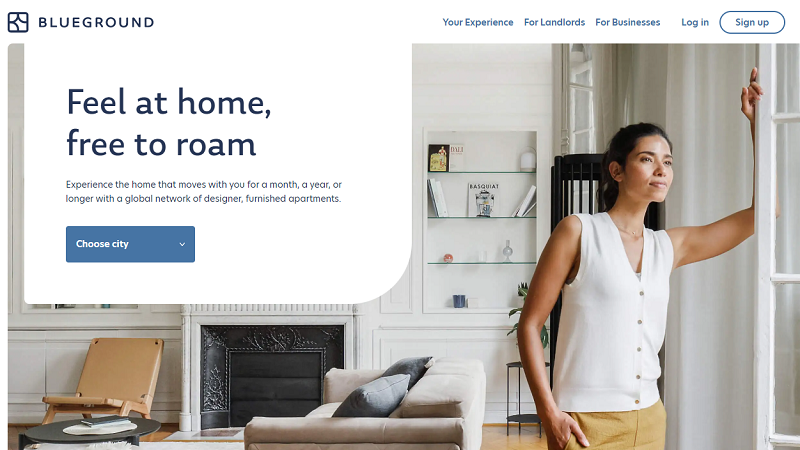 NEW YORK–(BUSINESS WIRE)–Blueground, a PropTech scaleup offering a turnkey, flexible housing solution for renters globally, announces today it entered into agreement to acquire Brazilian PropTech startup, Tabas. Marking the first acquisition in Blueground’s nearly 10-year history, the company will soon acquire Tabas after leading Tabas’ $14 million Series A funding round earlier this year. Tabas is the largest operator of designer-quality furnished apartments for 30 days or more in São Paulo, Rio de Janeiro, and Brazilia. The acquisition, which is expected to close in early Q1 2023, enables Blueground to enter the Latin American market, and fuel the increased demand for furnished, flexible rentals in the region. Together Blueground and Tabas will launch Mexico City in early 2023.

During the period between now and close, the two companies will continue to operate independently and will gradually integrate over the next year. The combined organization will have a presence in 29 cities across 16 countries, employing over 1,000 people. Based on current financial projections, the joint entity is projected to generate ~650M in 2023.

Blueground is the largest turnkey property rental company in the 30+ day sector. It has a network of 9,500 move-in-ready, expertly-designed homes enabling people to flexibly live wherever they choose. The company was co-founded by CEO Alex Chatzieleftheriou in 2013, who, after many years as a business consultant, had experienced first-hand the pain points of living out of hotels for work for months at a time. He aspired to create a seamless way for people to freely move between neighborhoods, cities, and countries around the world.

Blueground currently works with over 4,700 landlords globally, guaranteeing them rental income while providing expert property management and maintenance services at scale. The acquisition of Tabas will allow Blueground to grow its network faster, supporting its goals of 40,000 apartments across 50 cities by 2025, and add more location options for its client base.

“We’ve had our sights set on Latin America for quite some time, as we see huge market potential for furnished and flexible rentals,” said Alex Chatzieleftheriou, CEO and Co-founder, Blueground. “Since our first investment in Tabas last year, we’ve developed immense respect for the Tabas team and what they’ve built in Brazil. With our best-in-class technology and our expertise in scaling the business, we’ll continue to expand and offer the option for a flexible lifestyle in more markets globally.”

Founded in May 2020, Tabas was born out of the founders’ frustration with the lack of flexible, fully furnished rentals for mid- to long-term stays. Tabas now has over 1,000 apartments in three cities in Brazil – São Paulo, Rio de Janeiro, and Brazilia, raising over $20 million in funding prior to the acquisition. As the first project post-acquisition, Tabas will offer its knowledge and understanding of the market to support the launch of Blueground in Mexico City in early 2023, marking Blueground’s 30th city, and 11th in the last 12 months.

“Tabas and Blueground’s visions are fully aligned and together we can create even more value for our guests, our landlords and the Tabas team, ” said Leonardo Morgatto, Co-founder and CEO, Tabas. “This acquisition is yet another success story for Brazilian proptech companies. We’re proud of the work we’ve done to get us this far; now it’s time to take it to the next level and continue bringing the turn-key, flexible rental living concept across Latin America.”

The pandemic gave rise to new work environments, enabling people to explore the world and forgo traditional long-term leases for flexible rentals. To keep up with the growing demand, Blueground has doubled its supply of apartments in the last year.

The acquisition is subject to standard closing conditions, including regulatory approvals.

For more information or to book your next apartment, please visit www.theblueground.com.

Tabas is a Brazilian real estate technology startup providing beautifully-designed fully-furnished apartments for flexible stay. Founded in early 2020, it already has more than 1,000 apartments in its portfolio, in the cities of São Paulo, Rio de Janeiro and Brasília, all located in upscale neighborhoods, equipped and decorated with sophistication. With unprecedented flexibility for the Brazilian market regarding rental contracts, the company works with terms starting from 30 days of rent, guaranteeing the property maintenance to the owners and uncomplicated and well assisted reservations to the tenants. Find more on our website, Instagram, Facebook and LinkedIn.