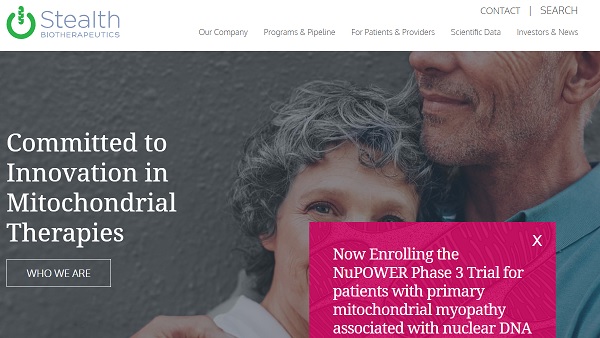 The Company also announced today that it requested that trading of its ADSs on NASDAQ be suspended as of November 16, 2022. The Company requested that NASDAQ file a Form 25 with the Securities and Exchange Commission (the “SEC”) notifying the SEC of the delisting of its ADSs on NASDAQ and the section 12(b) deregistration of the Company’s registered securities. The deregistration will become effective 90 days after the filing of the Form 25 or such shorter period as may be determined by the SEC. The Company intends to suspend its reporting obligations and terminate registration under 12(g) and 15(d) of the Securities Exchange Act of 1934, as amended, by filing a Form 15 with the SEC as promptly as practicable. The Company’s obligation to file with the SEC certain reports and forms, including Form 20-F and Form 6-K, will be suspended immediately as of the filing date of the Form 15 and will cease once the deregistration becomes effective.

About Stealth BioTherapeuticsThe Company is a clinical-stage biotechnology company focused on the discovery, development, and commercialization of novel therapies for diseases involving mitochondrial dysfunction. Mitochondria, found in nearly every cell in the body, are the body’s main source of energy production and are critical for normal organ function. Dysfunctional mitochondria characterize a number of rare genetic diseases and are involved in many common age-related diseases, typically involving organ systems with high energy demands such as the eye, the neuromuscular system, the heart and the brain. The Company believes their lead product candidate, elamipretide, has the potential to treat ophthalmic diseases entailing mitochondrial dysfunction, such as dry AMD, rare neuromuscular disorders, such as primary mitochondrial myopathy and Duchenne muscular dystrophy, and rare cardiomyopathies, such as Barth syndrome. The Company is evaluating their second-generation clinical-stage candidate, SBT-272, for rare neurological disease indications, such as amyotrophic lateral sclerosis and frontotemporal lobar dementia, following promising preclinical data. The Company has optimized their discovery platform to identify novel mitochondria-targeted compounds which may be nominated as therapeutic product candidates or utilized as mitochondria-targeted vectors to deliver other compounds to mitochondria.