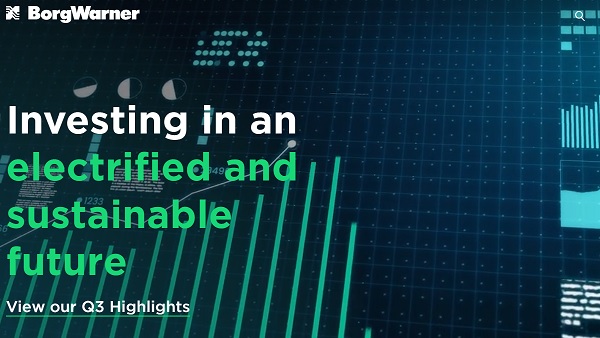 Wolfspeed, Inc., the global leader in Silicon Carbide technology, and BorgWarner Inc., a global product leader in delivering innovative and sustainable mobility solutions for the vehicle market, today announced a strategic partnership that calls for BorgWarner to invest $500 million in Wolfspeed’s financing transaction, which was announced earlier today by Wolfspeed, in exchange for a silicon carbide device capacity corridor. Under the multi-year agreement between BorgWarner and Wolfspeed, BorgWarner will be entitled to purchase up to $650 million of devices annually as BorgWarner requirements increase. Details of the Wolfspeed financing can be found in Wolfspeed’s separate press release and Form 8-K filed with the SEC earlier today. BorgWarner has also filed a Form 8-K disclosing its commitment to invest.

“Silicon carbide-based power electronics play an increasingly important role for our customers as our electric vehicle business continues to accelerate,” said Frédéric Lissalde, President and CEO of BorgWarner. “We believe this agreement helps ensure that BorgWarner will have a reliable supply of high-quality silicon carbide devices, which are significant to the company’s inverter growth plans. Building upon BorgWarner’s world-class Viper power switches and inverter technology, we are excited about the opportunity to work jointly with Wolfspeed, the leader in silicon carbide, on the potential development of the next generation of silicon carbide products. We believe our relationship with Wolfspeed will drive innovation, accelerate the global transition to electric vehicles, and further BorgWarner’s vision for a clean, energy-efficient world.”

“Today’s announcement demonstrates the creative solutions two collaborative and strategic partners are pursuing to better support the growing demand for silicon carbide devices. BorgWarner has been a strong partner with Wolfspeed for many years, and we are pleased to secure the investment from them which will be used to support our capacity expansion efforts and ensure we have a steady supply of product for their customers,” said Gregg Lowe, President and CEO for Wolfspeed. “This agreement, combined with our most recent announcement of a multi-billion-dollar materials expansion in North Carolina, confirms the industry transition from silicon to silicon carbide is well underway.”

Last month at the company’s Investor Day, Wolfspeed outlined a multi-year, $6.5 billion capacity expansion effort which included the installation of additional tools at the company’s state-of-the-art, 200mm Mohawk Valley fab and the construction of a 445-acre Silicon Carbide materials facility in North Carolina, which will expand the company’s existing materials capacity by more than 10x. The first phase of construction is slated to be complete by the end of FY2024.

Wolfspeed (NYSE: WOLF) leads the market in the worldwide adoption of Silicon Carbide and GaN technologies. We provide industry-leading solutions for efficient energy consumption and a sustainable future. Wolfspeed’s product families include Silicon Carbide materials, power devices and RF devices targeted for various applications such as electric vehicles, fast charging, 5G, renewable energy and storage, and aerospace and defense. We unleash the power of possibilities through hard work, collaboration and a passion for innovation. Learn more at www.wolfspeed.com.

Wolfspeed® is a registered trademark of Wolfspeed, Inc.

About BorgWarner:For more than 130 years, BorgWarner has been a transformative global product leader bringing successful mobility innovation to market. Today, we’re accelerating the world’s transition to eMobility — to help build a cleaner, healthier, safer future for all.