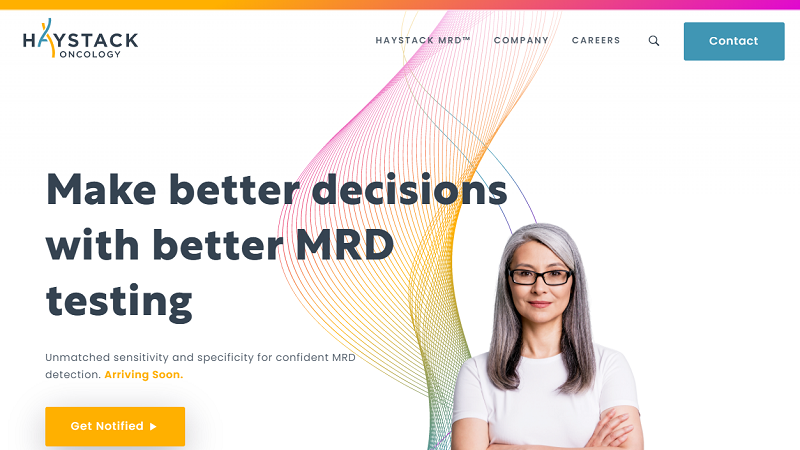 Haystack Oncology, an oncology company that applies the next generation of circulating tumor DNA (ctDNA) detection technology to optimize minimal residual disease (MRD) testing and better inform decisions around therapy, today announced that it raised $56 million in Series A financing. The funding will be used for the continued development and planned 2023 commercialization of its best-in-class personalized cancer diagnostic test that can detect as few as one mutant molecule in a million DNA molecules, positioning it as the most sensitive ctDNA-based MRD test for use in solid tumors. The financing was led by Catalio Capital Management, which co-founded Haystack through its private equity and structured equity investment vehicles. Additional investors include Bruker, Exact Ventures, the venture arm of Exact Sciences and Alexandria Venture Investments.

Haystack leverages over two decades of pioneering research in liquid biopsy technologies to detect with high sensitivity and specificity the presence of any traces of MRD – small numbers of residual tumor DNA molecules left in the body following initial treatment. These ctDNA molecules are a marker of the presence of cancer and indicate that the disease will recur. Haystack’s testing is designed to help inform clinical interventions by creating personalized diagnostic panels to customize optimal treatment plans for each patient, independent of a tumor’s origin.

A version of Haystack’s technology was utilized in the landmark DYNAMIC clinical study of stage II colon cancer patients post-surgery. Results from the study were reported earlier this year at the American Society of Clinical Oncology (ASCO) annual meeting and published in the New England Journal of Medicine1, demonstrating that applying Haystack’s ctDNA-guided approach to the treatment of stage II colon cancer significantly reduced the use of adjuvant chemotherapy without compromising recurrence risk or survival at two years.

“Detecting MRD has long been akin to looking for a needle in a haystack – we’re searching for a small number of tumor-derived DNA molecules in a sea of normal molecules in a blood sample. If residual disease is detected, the patient journey can be transformed to greatly improve the likelihood of clinical benefit, and ultimately, save lives,” said Dan Edelstein, President and CEO of Haystack. “Haystack’s mission is to deliver earlier, more precise detection of residual and recurrent tumors to personalize therapy and dramatically improve outcomes for patients with cancer. With the help of this funding, combined with Haystack’s truly differentiated technology backed by decades of liquid biopsy research, we are uniquely positioned to ensure that the right patients receive the right treatment at the right time, which has long been the vision of precision oncology.”

As part of this round, Isaac Ro, former Chief Financial Officer of Thrive Earlier Detection (acquired by Exact Sciences in 2020), has joined Haystack’s Board of Directors as Executive Chairman, and Dr. Diamantis Xylas, Catalio’s Head of Research, has joined the Board as an observer, alongside Catalio’s founders, George Petrocheilos and Dr. Jacob Vogelstein, who also serve on the Board.

George Petrocheilos, Co-Founder and Managing Partner of Catalio and a member of Haystack’s board of directors, added, “Haystack has the potential to revolutionize oncological testing and treatment, and we are excited to support this tremendous team of proven scientists and entrepreneurs. Haystack’s expertise and track record in the cancer genomics space is truly unmatched, and the team’s two decades of pioneering liquid biopsy research and testing validates the company’s approach. We look forward to supporting Haystack as they provide easily accessible, exquisitely designed, life-changing experiences for millions of patients diagnosed with cancer each year.”

Haystack Oncology uses the next generation of circulating tumor DNA (ctDNA) detection technology to see through the noise and uncover the lowest levels of ctDNA in blood to report residual, recurrent, or resistant disease earlier than any other minimal residual disease (MRD) test. Designed by cancer genomics pioneers and liquid biopsy experts, Haystack’s tumor-informed MRD test is best positioned to deliver the right treatment to the right person at the right time. Haystack is based in Baltimore, MD, USA, and has research facilities in Hamburg, Germany. Learn more at haystackoncology.com.

Catalio Capital Management, LP, is a multi-strategy life sciences investment firm that focuses on breakthrough biomedical technology companies developing the next generation of drugs, devices, diagnostics, and data-driven insights. Catalio’s partnership includes over 36 world-renowned scientists with extensive academic bona fides who have each started several successful companies based on their research. Catalio has offices in New York, Baltimore, and London. For more information, visit www.cataliocapital.com.