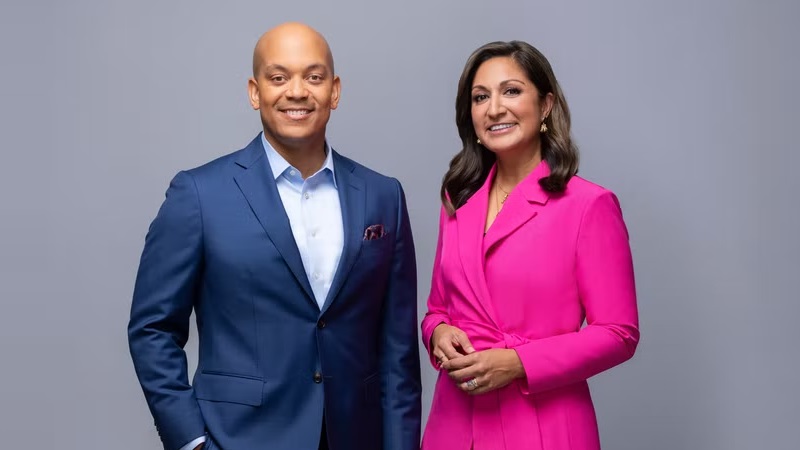 Sharon Rockefeller, President and CEO of WETA and President of NewsHour Productions, today named PBS NewsHour chief correspondent Amna Nawaz and chief Washington correspondent and PBS News Weekend anchor Geoff Bennett co-anchors of the nightly newscast. The PBS NewsHour, co-anchored by Nawaz and Bennett, will launch on Monday, January 2, 2023. Nawaz and Bennett succeed Judy Woodruff, who has solo-anchored PBS’s nightly news broadcast since 2016, prior to which she co-anchored it alongside the late Gwen Ifill.

Bennett has reported from the White House under three presidents and has covered five presidential elections. He joined NewsHour in 2022 from NBC News, where he was a White House correspondent and substitute anchor for MSNBC. In his prior experience, he worked for NPR — beginning as an editor for Weekend Edition and later as a reporter covering Congress and the White House. An Edward R. Murrow Award recipient, Bennett began his journalism career at ABC News’ World News Tonight.

On being named co-anchor of PBS NewsHour, Geoff Bennett said, “I’m proud to work with such a stellar group of journalists in pursuit of a shared mission — providing reliable reporting, solid storytelling and sharp analysis of the most important issues of the day. It’s why PBS NewsHour is one of television’s most trusted and respected news programs and why I’m honored and excited to partner with Amna in building on its rich legacy.”

Nawaz, who has received Peabody Awards for her reporting at NewsHour on January 6, 2021 and global plastic pollution, has served as NewsHour’s primary substitute anchor since she joined the NewsHour in 2018. She previously was an anchor and correspondent at ABC News, anchoring breaking news coverage and leading the network’s livestream coverage of the 2016 presidential election. Before that, she served as foreign correspondent and Islamabad Bureau Chief at NBC News. She is also the founder and former managing editor of NBC’s Asian America platform, and began her journalism career at ABC News Nightline just weeks before the attacks of September 11, 2001.

On being named co-anchor, Amna Nawaz added, “It’s never been more important for people to have access to news and information they trust, and the entire NewsHour team strives relentlessly towards that goal every day. I am honored to be part of this mission, to work with colleagues I admire and adore, and to take on this new role alongside Geoff as we help write the next chapter in NewsHour’s story. Today is a day I never could’ve imagined when I began my journalism career years ago, or while growing up as a first-generation, Muslim, Pakistani-American. I’m grateful, humbled, and excited for what’s ahead.”

In making the announcement, Rockefeller noted, “PBS NewsHour continues to be dedicated to excellence in journalism. Amna and Geoff bring to their new positions three essential qualities for the role – accomplished careers in substantive reporting, dedication to the purpose of journalism to illuminate and inform, and a deep respect for our audiences and the mission of public media.”

Sara Just, PBS NewsHour senior executive producer, added, “This is an exciting new chapter in the nearly 50-year history of this esteemed news brand. But while Amna and Geoff are a new generation of journalists, they share the same unwavering commitment to fair, careful and deep reporting for which this program has always been known. I look forward to seeing them shine and connect with our loyal audiences in these new roles.”

Paula Kerger, president and CEO of PBS, also noted, “We are incredibly excited for Amna and Geoff to co-anchor the PBS NewsHour, building on the legacy of the tremendous journalists who have previously held that role. For nearly five decades, audiences have turned to the NewsHour for thoughtful coverage of the most important issues of the day, and at a time when that work is more important than ever, we are grateful that Amna and Geoff will be leading the way.”

Patricia Harrison, president and CEO of the Corporation for Public Broadcasting, also noted, “Amna Nawaz and Geoff Bennett are both award-winning journalists who will bring deep experience and insight to their new roles and build on the great heritage of the PBS NewsHour. I look forward to watching them co-anchor the NewsHour as it begins its next chapter.”

With Bennett shifting to co-anchor of the weekday NewsHour, a new anchor of PBS News Weekend will be named in the coming weeks. Both Nawaz and Bennett will both remain NBC News and MSNBC contributors. Woodruff last week set her final broadcast date as anchor of NewsHour for Friday, December 30, 2022 and announced the launch of Judy Woodruff Presents: America at a Crossroads.

About WETA
WETA and its subsidiary NewsHour Productions LLC serve local and national public media audiences by producing and distributing content of intellectual integrity and cultural merit. As the leading public broadcaster in the nation’s capital, WETA serves Virginia, Maryland and the District of Columbia with educational initiatives and with high-quality programming on television, radio and digital platforms. WETA is the second-largest producer of programming for the PBS system, producing news and public affairs programs, including PBS NewsHour, PBS News Weekend and Washington Week; films by Ken Burns and Florentine Films, including Benjamin Franklin, Muhammad Ali and the recent The U.S. and the Holocaust; documentaries and series with Henry Louis Gates, Jr., including Making Black America: Through the Grapevine and Finding Your Roots; performance specials including In Performance at the White House, The Library of Congress Gershwin Prize for Popular Song, National Memorial Day Concert and A Capitol Fourth; and health content from Well Beings, a multiplatform campaign of digital and broadcast content and robust resources. More information on WETA and its programs and services is available at www.weta.org. Visit www.facebook.com/wetatvfm on Facebook and follow @WETAtvfm on Twitter.

About PBS
PBS, with more than 330 member stations, offers all Americans the opportunity to explore new ideas and new worlds through television and digital content. Each month, PBS reaches over 120 million people through television and 26 million people online, inviting them to experience the worlds of science, history, nature and public affairs; to hear diverse viewpoints; and to take front row seats to world-class drama and performances. PBS’s broad array of programs has been consistently honored by the industry’s most coveted award competitions. Teachers of children from pre-K through 12th grade turn to PBS for digital content and services that help bring classroom lessons to life. Decades of research confirms that PBS’s premier children’s media service, PBS KIDS, helps children build critical literacy, math and social-emotional skills, enabling them to find success in school and life. Delivered through member stations, PBS KIDS offers high-quality educational content on TV – including a 24/7 channel, online at pbskids.org, via an array of mobile apps and in communities across America. More information about PBS is available at www.pbs.org, one of the leading dot-org websites on the internet, or by following PBS on Twitter, Facebook or through our apps for mobile and connected devices. Specific program information and updates for press are available at pbs.org/pressroom or by following PBS Communications on Twitter.

About CPB
The Corporation for Public Broadcasting (CPB), a private, nonprofit corporation authorized by Congress in 1967, is the steward of the federal government’s investment in public broadcasting. It helps support the operations of more than 1,500 locally managed and operated public television and radio stations nationwide. CPB is also the largest single source of funding for research, technology and program development for public radio, television, and related online services. For more information, visit cpb.org, follow us on Twitter @CPBmedia, Facebook and LinkedIn and subscribe for other updates.