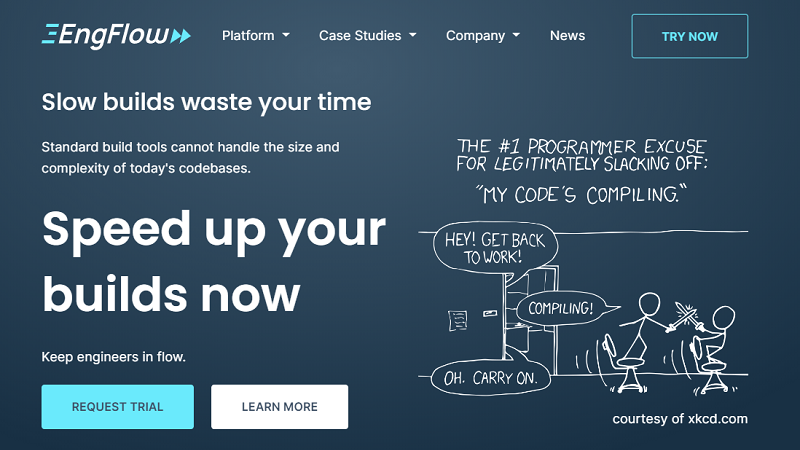 NEW YORK–(BUSINESS WIRE)–EngFlow, the leading build acceleration company for innovative software development teams, today announced it has raised $18 million in Series A financing from Tiger Global, Andreessen Horowitz, firstminute capital and others. Andreessen Horowitz is doubling down on the company after having led EngFlow’s $3.7 million seed round.

Software updates across phones, cars, autonomous systems, financial services and more depend on the speed of build systems. As software code bases become bigger and more complex, a dramatically new approach that can allow hundreds or thousands of engineers to collaborate and rapidly release software is required. EngFlow does this with remote caching and execution for Bazel, Chromium and Android Platform (AOSP), allowing software builds to be completed efficiently and quickly by leveraging parallel processing, smart algorithms and cloud infrastructure. The result is complex software builds taking minutes rather than hours or even days.

EngFlow’s customers include large teams that range into the thousands of software developers. EngFlow’s technology is uniquely positioned to serve these customers, with demonstrated use of tens of thousands of computing cores – and accelerating to hundreds of thousands in the coming months.

Martin Casado, General Partner at Andreessen Horowitz, said: “Build is one of the most critical aspects of building software. And traditionally it’s been a massive time and cost sink for companies to get right. We believe EngFlow is the leading company changing all of this. Coming from deep roots in Bazel and build, they’ve put together a solution which for the first time we’ve ever seen, is able to tackle the most complex code bases and large infrastructure environments and offer dramatic savings in development time and costs. These aren’t mere words, EngFlow has extraordinary customer traction across a number of verticals, far more than we normally see at this stage. We’re delighted to be investors as EngFlow continues their path as the leading build company.”

“Slow build times are perhaps the biggest drain on modern engineering teams. In the era of cost-cuts, big-tech lay-offs and with pressure to deliver more with less – deploying EngFlow is the way to go. We at firstminute are very excited to continue supporting Helen and Ulf in their journey and to make one of our largest investments to date into EngFlow’s Series A,” said Arek Wylegalski, Partner, firstminute capital.

The company today is also announcing the release of the Bazel Invocation Analyzer, a new open-source tool to help developers analyze their Bazel profiles and gain insights to optimize their builds.

“This new tool from EngFlow provides tailored suggestions to empower engineers to increase their team’s productivity and reduce their products’ time to market. Bazel profiles are a powerful resource for improving performance, but understanding them and extracting action items from them is hard. The Bazel Invocation Analyzer automates the process and gives concrete suggestions based on the data found in the profile.” said Sara Adams, EngFlow founding engineer and Bazel Invocation Analyzer lead.

Bazel is an open-source project supported by Google and others dedicated to building a human-readable, high-level build language that supports multiple languages for multiple platforms. EngFlow co-founders Helen Altshuler and Ulf Adams were among the earliest contributors to Bazel. Altshuler led enterprise adoption efforts and co-created the first BazelCon while at Google. Adams was the lead for Bazel at Google and is ranked #2 in all-time contributions to the project, according to GitHub.

For more information about the new Bazel Invocation Analyzer, join us this week at BazelCon or visit us on GitHub or at https://analyzer.engflow.com/.

The demand for Bazel talent has never been higher, and EngFlow has been able to recruit some of the world’s most notable experts in this area. Recent hires include Bazel experts Jay Conrod, Corbin McNeely-Smith, Benjamin Peterson, and Ola Rozenfeld, who have played a pivotal role in shaping the development of the Bazel ecosystem and its adoption at companies like Block (f/k/a Square), Dropbox and Google. The recent hires join other core Bazel engineers and co-founder and Bazel contributor Ulf Adams.

EngFlow has been providing build acceleration technology to large enterprise customers across financial services, automotive/autonomous driving, mobile, ecommerce and software verticals since its founding in 2020.

Recently Viasat, a leading global communications company, saw build speed times improve by 24 times by using EngFlow, which enables it to ship faster while meeting all compliance, security and other requirements. “Before EngFlow, every time Chromium released a security patch, we had to start in the morning and get back to it late in the day. Now we just go get coffee and by the time we are back it is ready to be tested!” said Viasat’s senior navigation engineer Timothy Flynn.

Taylor Brown, co-founder and COO at Fivetran said: “Our engineering team uses Bazel quite intensively so we decided to give EngFlow a try and never looked back. The best part about EngFlow, however, is that it just works! Hundreds of builds daily and growing, zero issues whatsoever. We have a huge appreciation for Helen and the entire EngFlow team who have been great to work with, thank you!”

“By accelerating the software build process, EngFlow solves a critical bottleneck in development, improving the productivity and satisfaction of engineering teams,” said Scott Shleifer, Partner, Tiger Global. “We believe EngFlow has the right leadership team with Helen and Ulf, and we are excited to partner with them.”

EngFlow is a SaaS company that is redefining how companies build software and ship well-tested products. Its remote execution service speeds up software builds by a factor of 10 or more, and its observability platform provides insights to optimize builds and tests. Created by the engineer who led the development of Bazel, Google’s open-source build system, EngFlow builds tools and connects experts in the Bazel and build ecosystem. EngFlow products are used by engineers from startups to Fortune 500 companies to accelerate developer productivity and positively impact engineering culture. For more information, visit: https://www.engflow.com/.