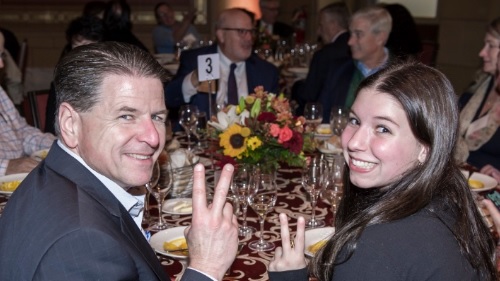 John C. Metz Jr., executive chef, CEO, and co-founder of Sterling Hospitality and Culinary Institute of America (CIA) alumnus, has been elected the 22nd chairman of the CIA’s board of trustees. The 30-year restaurant and hospitality veteran succeeds restaurateur Ralph Brennan in this role.

“I am humbled and honored to serve as chairman of The Culinary Institute of America,” says Metz, who joined the college’s Board of Trustees in 2014. “Today’s CIA students are truly poised to lead our industry into the future and redefine the restaurant and hospitality industries. I can’t think of a more rewarding position to help shepherd that process.”

With Sterling Hospitality, Metz reimagines both neighborhood and corporate dining through chef-driven, upscale restaurant concepts such as the Woodall, Marlow’s Tavern, Market Street Café, and The Spinning Room. Across all of his restaurants, Metz has created a culture of world-class hospitality that extends to the company’s clients, vendors, employees, and guests and goes above and beyond to enhance the quality of life in the communities his restaurants call home. Under his leadership, Sterling Hospitality was recently named Hospitality Hero of the Year at the 2022 Georgia Restaurant Association GRACE Awards.

Metz nurtured his passion for the industry from an early age, moving up the ranks from dishwasher to running the kitchen in one of his father’s restaurants. His formal education began with The Pennsylvania State University’s Hotel and Restaurant Management program. From there, he went on to Switzerland—where he staged at two Michelin-starred restaurants—before enrolling at the CIA, from which he graduated at the top of his class in 1992.

In 2020, Metz was named to the Atlanta Business Chronicle’s “Atlanta 2020 Most Admired CEO” list. An active community member and philanthropist, he serves on the boards of both national and local organizations including The National Restaurant Association, Georgia Restaurant Association, and The Atlanta Convention & Visitors Bureau. He was appointed vice chairman of the Distinguished Restaurants of North America (DiRoNa) in 2005 and served as their board chairman in 2007 and 2008. In addition, he is a fervent supporter of Special Olympics Georgia and Share Our Strength, and his company has raised more than $1.7 million for these and other community organizations.

“John Metz embodies the best of all worlds—a solid culinary and business foundation, combined with a warm and gracious personality,” says CIA president Dr. Tim Ryan. “He gives 110% to everything he does, and as an alum, he brings keen insight into the student experience. I look forward to continuing to work with him to help lead the Institute—and the industry—into the future.”

The CIA Board of Trustees is comprised of 22 highly respected leaders in the food service industry and business world. They provide expert governance and guidance for the not-for-profit college and are not compensated for their services.

Sterling Hospitality operates Marlow’s Tavern, which offers classic American tavern fare with an upscale twist, as well as Sterling Culinary Management, which specializes in creating on-site restaurant and café options for the corporate dining industry; Market Street Café, a corporate café concept located in the Prominence Tower building; the Woodall, which serves a globally inspired take on contemporary favorites; and The Spinning Room, an upscale wine and bar offering small plates and live music in Dalton, Georgia. In 2022, the Georgia Restaurant Association named Sterling Hospitality its Hospitality Hero of the Year during the annual Georgia Restaurant Association Crystal of Excellence (GRACE) Awards ceremony.

About The Culinary Institute of America

Founded in 1946, The Culinary Institute of America is the world’s premier culinary college. Dedicated to developing leaders in food service and hospitality, the independent, not-for-profit CIA offers master’s, bachelor’s, and associate degrees with majors in culinary arts, baking & pastry arts, food business management, hospitality management, culinary science and applied food studies. The college also offers executive education, certificate programs and courses for professionals and enthusiasts. Its conferences, leadership initiatives and consulting services have made the CIA the think tank of the food industry and its worldwide network of more than 50,000 alumni includes innovators in every area of the food world. The CIA has locations in New York, California, Texas and Singapore. For more information, visit www.ciachef.edu.