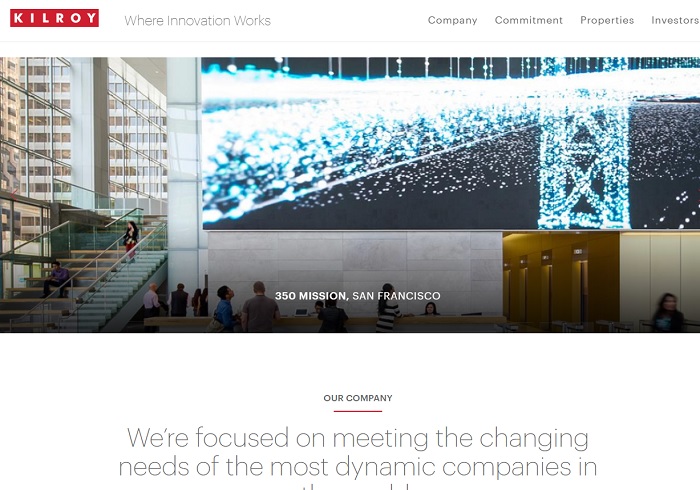 LOS ANGELES–(BUSINESS WIRE)–Kilroy Realty Corporation (NYSE: KRC) today said it signed new or renewing leases on approximately 286,000 square feet in its stabilized portfolio during the second quarter. The leasing activity was spread across several of its West Coast markets, including San Diego, Los Angeles and the San Francisco Bay Area. Average rents in the recently executed leases were up approximately 11% on a cash basis and 30% on a GAAP basis over the prior leases. The average term of the agreements was six years and approximately 80% were renewals. During the first six months, KRC has signed new or renewing leases on over 508,000 square feet in its stabilized portfolio. The portfolio is currently 96% leased.

Included among the larger transactions, KRC signed a 119,000 square foot renewal lease with Scripps Health in the Del Mar market of San Diego. The original lease was scheduled to expire in the second quarter of 2021. In a second transaction, Perkins Coie, a national legal firm, renewed its 37,000 square-foot space in Palo Alto for a term of 11 years. With the completion of these transactions and excluding a fourth quarter expiration in Long Beach in which the company is in negotiations to release the space, KRC’s stabilized portfolio has no expirations greater than 65,000 square feet until 2022. Across the next three years, the portfolio’s expirations average approximately 4% per year, down from 6% at the beginning of 2020.

“Notwithstanding the severe business disruptions and uncertainties created by the coronavirus pandemic, we are finding continued demand among both existing and prospective tenants for well-located properties in our West Coast markets,” said John Kilroy, Chairman and CEO of Kilroy Realty. “These transactions not only speak to the strength of our portfolio in retaining and attracting high quality tenants, but also support the strength of our markets. We believe that our young, high quality portfolio, with its focus on flexibility, efficiency and sustainability, will continue to attract the dynamic industries that populate our West Coast markets as their workplace needs continue to evolve.”

About Kilroy Realty Corporation. Kilroy Realty Corporation (NYSE: KRC, the “company”, “KRC”) is a leading West Coast landlord and developer, with a major presence in San Diego, Greater Los Angeles, the San Francisco Bay Area, and the Pacific Northwest. The company has earned global recognition for sustainability, building operations, innovation and design. As pioneers and innovators in the creation of a more sustainable real estate industry, the company’s approach to modern business environments helps drive creativity, productivity and employee retention for some of the world’s leading technology, entertainment, life science and business services companies.

KRC is a publicly traded real estate investment trust (“REIT”) and member of the S&P MidCap 400 Index with more than seven decades of experience developing, acquiring and managing office and mixed-use projects.

A Leader in Sustainability and Commitment to Corporate Social Responsibility

KRC is listed on the Dow Jones Sustainability World Index and has been recognized by industry organizations around the world. KRC’s stabilized portfolio was 66% LEED certified and 43% Fitwel certified as of June 30, 2020.

The company has been recognized by GRESB, the Global Real Estate Sustainability Benchmark, as the sustainability leader in the Americas for six consecutive years. Other honors have included the National Association of Real Estate Investment Trust’s (NAREIT) Leader in the Light award for six consecutive years and ENERGY STAR Partner of the Year for seven years as well as ENERGY STAR’s highest honor of Sustained Excellence, for the past five years.

A big part of the company’s foundation is its commitment to enhancing employee growth, satisfaction and wellness while maintaining a diverse and thriving culture. The company was named to Bloomberg’s 2020 Gender Equality Index—recognizing companies committed to supporting gender equality through policy development, representation, and transparency.

More information is available at http://www.kilroyrealty.com.