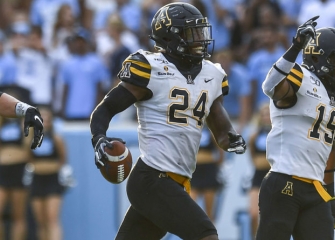 For Appalachian State’s Akeem Davis-Gaither, one of the top linebackers in the 2020 NFL Draft, being drafted by the Ravens sounds like a great opportunity to start a professional career.

“My idol is Ray Lewis, so that would mean the world to me … to suit up for the Ravens and be able to take a step in his shoes,” Davis-Gaither said on Glenn Clark Radio April 7, adding that “it would be an awesome experience.”

Davis-Gaither began to play more like his idol at Thomasville High School in his native North Carolina after a position switch.

“I started off in high school as a safety, then they moved me down as a linebacker,” he said.

The switch paid off. The 6-foot-1, 224-pound Mountaineer is now preparing for the draft after a pair of spectacular seasons at Appalachian State. He earned second-team and first-team All-Sun Belt selections in 2018 and 2019, respectively, and won the Sun Belt Defensive Player of the Year award in 2019 as well.