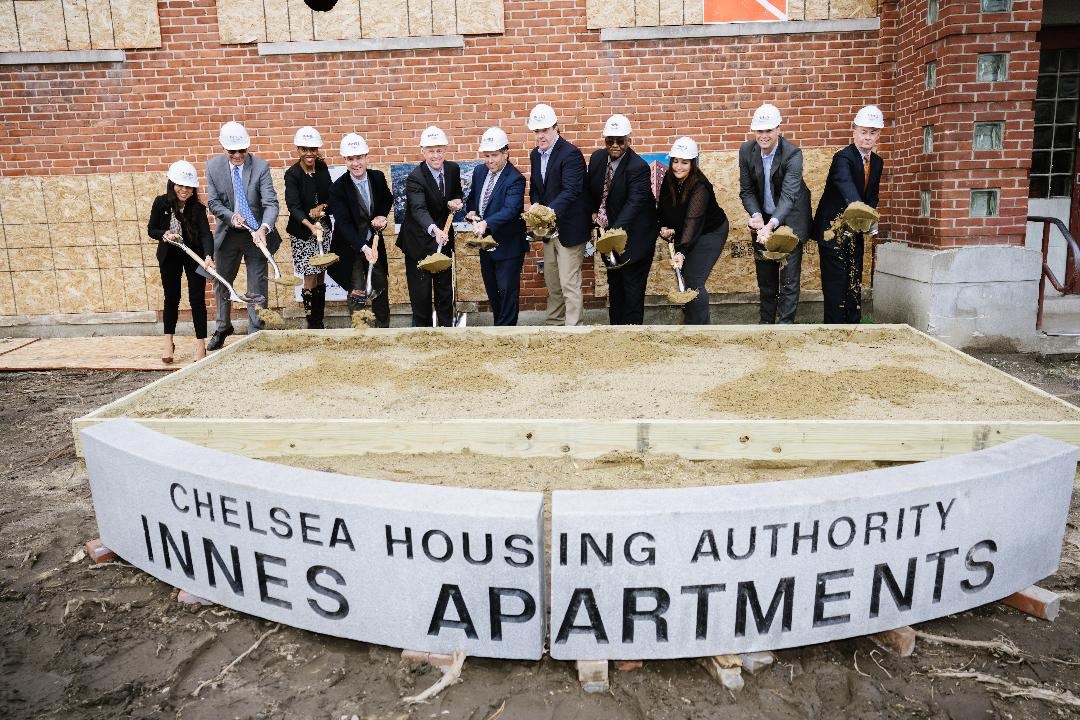 The Innes Redevelopment team led by co-developers Joseph J. Corcoran Company and John M. Corcoran & Company along with, Marcus Partners and Cambridge Savings Bank in partnership with the Chelsea Housing Authority (CHA), the Massachusetts Office of Housing and Economic Development and Department of Housing & Community Development (DHCD) joined together for the official groundbreaking of the Innes Apartments. This redevelopment will be the first demonstration of DHCD’s Partnership to Expand Housing Opportunities (PEHO) program, which establishes public-private partnerships between housing authorities and developers to preserve public housing through the creation of mixed income communities.

“Today’s groundbreaking is the culmination of years of collaboration and hard work. However, this celebration is just the beginning of new lives for our residents and future generations of people who depend on the Chelsea Housing Authority,” said Al Ewing, Executive Director of the Chelsea Housing Authority.   “I am proud of the team we put together who put our residents first and equally proud of the dedication and commitment of our residents who spent countless hours advocating for themselves and their neighbors to ensure these new homes will meet their needs – the stewardship of this team will be an example for generations to come.”

“My children and I have been part of this process since the very beginning and we have seen first-hand how people working hand in hand with government and private partners can get big things done,” shared Melissa Booth, President of the Innes Resident Association. “Through this success, I have so much hope for the future of housing in Chelsea. We have built trust that will live on in our community.”

The eight deteriorating Innes apartment buildings will be demolished as part of this redevelopment to make way for a new 350,000 square foot, state of the art community.  The newly reconstructed Innes Apartments will provide new homes for the current residents of 96 units of public housing at the site, an additional 40 units of new middle-income opportunities for new families and 194 market rate apartments near public transportation. The mixed-income redevelopment will also include onsite amenities for residents and much needed ground-floor retail space to activate the Central Avenue Smart Growth area.

“I am extremely proud of the entire team for their unwavering commitment to the success of this redevelopment effort,” said Joseph J. Corcoran, “especially the current residents of the Innes Apartments, who stuck with us through the years. We are eternally grateful to the Chelsea Housing Authority and our partners in local and state government for putting their confidence in my team and John M. Corcoran & Company to get this done. Today is a hard-fought, important step forward for the generations of families who will call this place home.”

“The Baker-Polito Administration has been thrilled to support this redevelopment, which will triple the number of housing units on site, revitalize an important state asset, and achieve a transformational goal for the city of Chelsea,” said Housing and Economic Development Secretary Mike Kennealy. “Congratulations to all of the public, private, and community partners driving this project forward and to the residents who will call Innes Apartments home.”

The increases in cost along with the changing thresholds for underwriting and investment terms required the project to seek additional resources to achieve the financial feasibility. The Commonwealth of Massachusetts provided additional funding through the Department of Housing and Community Development, also a Mass Works grant to improve various stormwater and utility connections along the Central Avenue and the City of Chelsea provided more flexibility through an amended TIF agreement.  This public investment allowed the development team to bring in new private partners allowing this project to move forward.

“This Innes Redevelopment is the result of the hard work and support of many city departments and DHDC staff working together, especially over the last two years to get us to our Groundbreaking today,” said Peter Mahoney, Executive Vice President, John M. Corcoran & Co. “It’s been amazing to be a part of this collaborative work toward a shared goal – providing new homes for residents and pathways to housing for more people in the community – and our financing partners see the value in this work too with nearly $120MM in locally sourced private funding to make this happen.”

The redevelopment partnership now includes John M. Corcoran & Co., a Braintree based development and management company with 70+ years of experience in development and residential management of multifamily housing with nearly 13,000 units currently under management, including several sites in Chelsea and Marcus Partners, a Boston-based vertically integrated real estate firm with a strong history of successful investment, management and development. The development team secured financing through Cambridge Savings Bank and participant banks Eastern Bank and Harbor One Bank to move the Innes Redevelopment toward final completion.

“This project represents a commitment to preserve and improve existing affordable housing, while creating additional workforce and market-rate housing in a transit-oriented, mixed-income development,'” said Ryan McDonough, Co-Chief Investment Officer at Marcus Partners. “Along with John M. Corcoran & Co. and Joseph J. Corcoran Company and our partners at the City of Chelsea, and the Commonwealth of Massachusetts, we saw an opportunity to contribute to addressing the current housing crisis and participate in a public-private partnership that will hopefully serve as example for future efforts.”

The Innes Redevelopment team, along with Housing Opportunities Unlimited (HOU), and in collaboration with the Innes Residents Association (IRA) finalized the relocation process of residents, adhering to the previously developed Resident Relocation Plan for the people in the 96 units of public housing.  The Resident Relocation Plan was developed in close coordination between CHA, IRA and JJC to ensure all residents are treated equitably and fairly throughout the redevelopment process. The relocation plan is prescribed through a combination of housing law and recommendations generated through a series of meetings with the Innes Resident Association represented by Greater Boston Legal Services in collaboration with HOU.

“The Innes Redevelopment project is a positive example of how public and private partnerships should work. Chelsea Housing Authority and JJC have been resident-first focused and committed to engaging the residents often and consistently,” said Susan Connelly, Chief Operating Officer at Housing Opportunities Unlimited. “The resident community has also been supportive of the redevelopment. HOU is excited to help residents move back home in 18 months.”

Construction of the Innes Redevelopment is being led by Plumb House, Inc with the expectation that residents will be able to move back into new homes beginning in 2024.

Innes Apartment Redevelopment is for Everyone

In 2016, Chelsea had been selected to envision a $120 million redevelopment of the existing Innes Apartments public housing community – today it is a $155 Million investment project.   Under the leadership of the Chelsea Housing Authority and the Innes Residents, private capital was secured through John M. Corcoran & Company and Joseph J. Corcoran Company, local multifamily housing developers, to realize a fully integrated mixed-use community for all residents of Chelsea. Those sources of capital came from public agencies, DHCD, the MassWorks program and The City of Chelsea as well as private capital from Cambridge Savings Bank (and participants Eastern Bank and Harbor One Bank), Marcus Partners, JMC and JJC.